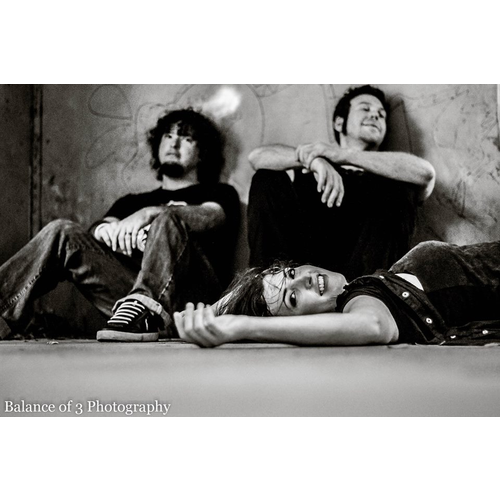 Last year, I first heard of a hard-rocking, female-fronted band called Sunshine & Bullets on a popular Tampa Bay radio program called The Bubba the Love Sponge Show. Say what you want about Bubba, but one thing you got to give him credit for is that he regularly features unsigned bands. To that extent, Bubba’s invited such bands, including Sunshine & Bullets, to send in their best material, particularly original tunes, for him and his sidekicks to review.

Sunshine & Bullets are based in Tampa, and features bassist Amanda Hamers, who shares lead vocals with guitarist Rich Keane. Rounding out the trio is drummer Kyle Wolfram. When I interviewed Amanda and Rich prior to their recent show at the Local 662 in St. Petersburg, FL, where they celebrated the release of their second and latest album Triangulum Mechanism, Amanda told me that she wasn’t sure of their chances that the Bubba show would select their music.

“We thought it was going to be lost, he wasn’t going to pick us,” Amanda said, “[then] I was actually driving in the car, and I heard [Bubba] read the letter that we wrote to him. And it had been so long that we had completely forgotten what we wrote. He started it with, ‘To whom it may concern,’ and I was thinking to myself, ‘What dumbasses.’ As he read further, I’m like, ‘We’re the dumbasses.’”

Once Bubba began playing their track, as Amanda then told me, it was like a rollercoaster ride from there. And rightfully so, because Bubba and his gang liked Sunshine & Bullets so much that they earned an opportunity to play live on his show. Though they were already getting some airplay on radio stations in the Tampa Bay and Ft. Myers areas, their live appearance with Bubba had only helped to improve on their brand and identity.

“The day of Bubba, that got us 600 fans instantly,” said Rich Keane. “And [it] just constantly poured in, over and over and over again; it kept going and going. It was like nothing else.” Even in an age of satellite radio and Internet-in-cars, such newfound fandom that a band like Sunshine & Bullets can get for being on a popular radio show like Bubba the Love Sponge’s is a testament to that legacy medium’s power.

Amanda is originally from the New Orleans area, but was born into a military family, which often means constant relocation. During her middle and high school years, Amanda lived in Honolulu, where her parents were both stationed for military service. She told me that her family’s on-base housing as offering a balcony that had a spectacular view of Pearl Harbor. Like many a bassist, Amanda started out learning to play guitar first, which she did while in high school. Many women can count a female guitarist like Joan Jett or Lita Ford as having inspired them to pick up a guitar, but not necessarily so with Amanda.

“They were all male,” she said, “I liked Jimi Hendrix. I even liked some of the electronic stuff that had guitar in them. I loved Trent Reznor of Nine Inch Nails.”  But don’t get Amanda wrong; while she doesn’t count Joan or Lita as having directly influenced her, she does respect the work they have done. And while Tori Amos is a pianist, Amanda grew up listening to her. She describes Tori as a singer who sings with such a passion as to be contagious.

Sunshine & Bullets were formed in a rather roundabout way. Amanda and Rich were in a prior band just a few years ago, but while they were already writing songs together, she tells me that this first band “never left the garage…We couldn’t keep a drummer; we kept rotating two drummers.”

Amanda’s next band effort had her playing bass, while Kyle happened to be their drummer. But when that didn’t last, a good thing came out of its aftermath, as Amanda explained to me. “I said, ‘Hey, Kyle, you’re a great drummer. I know an awesome guitarist. Let’s start a band.’ And that was it.”

Sunshine & Bullets offer up a strong and consistent mixing of classic and alternative rock elements that have already won fans over, as exemplified not just in live appearances like their recent show at Local 662, but also in their two full-length albums, Fight For Andromeda [2011] and, of course, Triangulum Mechanism. To help make that latter album happen, they decided to go on Kickstarter to raise $6,000 from their fans, well in excess of the $5,000 goal they set, although Amanda had some concerns about whether they’d reach that mark.

“When we were setting up the Kickstarter,” she said, “we were really nervous that we set the goal too high. So, when we went over the goal, it felt really amazing, the support of our fans, our family and friends, and people we don’t know from other countries who became friends of ours, so it’s really good.”

Amanda also told me that she would “absolutely” use Kickstarter again if Sunshine & Bullets decide to do some sort of extensive touring. As for some future point whether they would sign a major-label contract, Rich told me that it would depend on the deal.

Amanda and Rich not only trade off their own vocals very well, but also complement each other on their respective axes [bass and guitar]. And that’s to say nothing of how quite fun they are on stage. Yes, that’s what bands like Sunshine & Bullets are about…rocking hard and having great times.