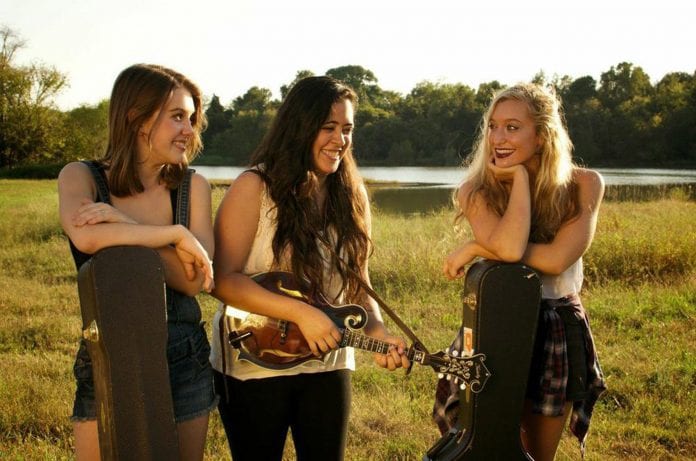 All girl trio, Maybe April, hail from various backgrounds, states and culture, yet they share a common and strong bond; their love of music. All three ladies met in 2012 at a summer camp, where their songwriting and musical styles worked in a compatible manner. Katy Bishop, Kristen Castor and Alaina Stacey use their harmonious styles to write and create music. They have several upcoming shows in Nashville, with an additional date at the renowned and coveted The Hotel Cafe in Los Angeles, California.

We had the opportunity to chat with Katy, Kristen and Alaina about each other’s writing styles, improvements in music for women in recent years, how they make it work musically, and some fun facts about them. Read on to delve into the mind of Maybe April:

Maybe April: We all grew up influenced by different artists, so separately we all kind of fit into different genres. Katy writes more soul country stuff, Kristen is very poetic and abstract in her writing, and Alaina is more melodic and literal. We think it’s a good combination between the three of us.

GGM: How do you each think music has improved for women creating and writing music? Do you think there have been any setbacks?

Maybe April: In general, it seems like women are really able to be heard in the music world through writing. There are some really amazing female songwriters and singer/songwriters that we look up to, like Lori McKenna and Lisa Carver. It is pretty dissapointing that there are barely any female artist writers being heard in country today, and we hope that changes soon.

GGM: When did you guys know that each of your writing and music styles would mesh well together?

Maybe April: The very first time we wrote together. We met in the summer of 2012 and sort of ended writing a song together on accident. The song came out in a couple hours and it was pretty obvious to all of us that we were going to have a special connection if we continued writing as a group. We decided less than a year later to move in together and make ourselves an official group.

GGM: What was it like playing with and in front of your musical peers at the 2014 GRAMMY event, “A Song is Born”?

Maybe April: It was one of the most terrifying and exciting experiences of our lives. Right before we went onstage, we saw Kris Kristofferson standing in the side wings, about to watch us perform. It was a little overwhelming knowing that one of country music’s legends was about to hear us sing. We got to meet him and Bonnie Raitt right after we got off stage, and they were very encouraging.

GGM: There must be pressures sometime. How do you guys make it work as a collective group?

Maybe April: It is hard, especially because we’re all so young and different, and we’re still learning how to even figure ourselves and our own lives out, let alone how to be in a group and work together every single day. It takes a lot of talking and communication, and it helps that we all love each other a lot.

GGM: Who was each of you guys’ first concert, and who has been your favorite?

Katy: My first concert was Shania Twain when I was three years old. My favorite concert is Switchfoot, because they’re amazing and they’re my favorite band. They’re super inspiring live.

Kristen: My first concert was the Spice Girls when I was thirteen years old, but I went to see a lot of local bands. My favorite concert was probably Iron Maiden, because they’re the best metal band of all time. There were thousands of people chanting the songs and they had their huge mascot come out on stage with them – it was crazy.

Alaina: My first real concert was either Brad Paisley when I was probably ten years old, or Ben Folds, around the same time. I can’t remember which came first. My brothers were in a band when I was younger though, so I grew up going to their concerts ever since I can remember. My favorite concert was the Civil Wars in Chicago.

GGM: What five artists or album would each of you not want to live without?

DISCLAIMER: It really depends on the day, we all have so many favorites that it’s pretty much impossible to choose.

What was your first album on vinyl, cassette and/or CD?

Maybe April: Katy’s was a tape of Spice Girls, Kristen’s was a BBMak CD, and Alaina’s was ‘Nsync’s “No Strings Attached”.

GGM: Do you gals have a guilty music or entertainment pleasure?

Maybe April: Beyonce for sure. Katy loves Ariana Grande, Alaina’s absolute favorite guilty pleasure is R. Kelly, and Kristen is proud to admit that she likes some Hannah Montana songs.