Teresa Topaz, “Guitar Goddess,” is a Southern Rock and Blues Original Artist from Los Angeles, CA. Topaz is a vocalist, lead guitarist, composer, and record producer. She has been voter-nominated by the Willamette Week’s Top 5 Best Blues Rock Artist and the “Guitar Goddess” by the Portland Tribune. With her newly released single, “Whiskey Kinda Girl,” on New Year’s Day 2019, it’s a whiskey drinkin’ Friday night and a downright good ol’ time. “Whiskey Kinda Girl” is an original production by Teresa Topaz: Vocals, Lead and Rhythm guitar, with Keith Waters on Bass (Andree Thierry), Vince Littleton on Drums (Jerry Garcia, Trey Anastasio, Bonnie Raitt), and Tim Biedron as Head Engineer and Co-Producer. Topaz has a powerful vocal range meshed with a soulful, bluesy grit shaping a rare temperament while her electric guitar hooks reel you in with catchy rhythms and screaming solos.

Topaz has performed live with artists such as Steve Vai at The Hard Rock Hotel and the Big
Mama Jam-A-Thon, Roni Lee (Venus and the Razorblades, Joan Jett) to Jeff Kathan (Bad
Company, Roger Fisher) to name a few. On her last record, Reset Me, Topaz composed and
performed all instruments on the album featuring Keith Waters on bass guitar. Topaz is
currently working on her upcoming record Point of No Return and is excited to get back out on the road to support the new release. Topaz is a rising leading woman in music and a force to be reckoned with.

You recently released a new single “Whiskey Kinda Girl.” Tell us about it!
Whiskey Kinda Girl is my love song to Whiskey. I have always wanted to write a love song to Whiskey that was a fun and energetic dance/ bar song. It’s a Friday night and a downright good ol’ time! I recorded this track in my own studio, TNT Studios, San Francisco Bay Area, CA and it was the first track I created off of my upcoming record Point of No Return.

Tell us a little about your music background.
Music has always been a path for me in my life. I have been singing since I was six years old, guitar at 12 years old, and started writing songs at 14. When people asked me what I wanted to be when I grew up, I replied with “I want to the be the album you put on when you’re having a good day!”. In school, I was in theater, choir, and started a band playing rock songs. I am completely self-taught in every instrument and composition. When I was young, my vocal warmups where to Slash’s guitar solos in Guns N’ Roses. I couldn’t afford weekly vocal lessons, so I mimicked artists of influence and studied their technique and every move they made with their voice and the same goes for guitar. I did it backward, I wrote and produced Rest Me, my debut album in 2015, and then learned theory and arrangement afterward. That entire album came from the heart. I think it’s very important for an artist to know theory and everything they can learn about their career. If you’re going to master your instrument, master it!

Who were the musical influences that inspired you to pursue music?
Wow, well that’s a topic, lol. I was lucky enough to have influences from my father like Cole
Porter, Peggy Lee, Frank Sinatra, Mile Davis, and George Gershwin to my mother’s influences like Led Zeppelin, Bob Dylan, Hendrix, and Pink Floyd. Then mixed up with my generation of music and other artists I found like Guns N’ Roses, Pearl Jam, Muddy Waters, Albert King, Tori Amos, Eric Clapton, Lynyrd Skynyrd, and Black Crows. You can classify me as a Southern Rock and Blues artist but man, if you put any Blues artist, whatsoever, I’m reaching for my guitar and singing along as if I wrote it… it’s instant. My heart belongs to the Blues and that’s where Rock ‘n’ Roll comes from. All of these amazing artists playing the same notes on so many different genres with such flair is what lead me down the path of music.

Besides playing music, what other hobbies and interests do you have?
I’m so obsessed with music and guitars that I became a certified guitar technician so
overhauling guitars is fun for me and allows me to install and do what’s needed on my
instruments on a daily basis. I also am a food and spirit nut and really enjoy cooking. Love being outdoors, laughing, learning something new every day, chocolate, whiskey, and curling up on the couch with the food network.

Photo provided by the artist – **I, Teresa Topaz,  am the sole owner of these photos taken and have obtained rights to post and use. ** 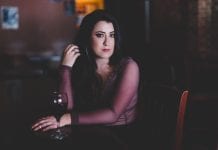