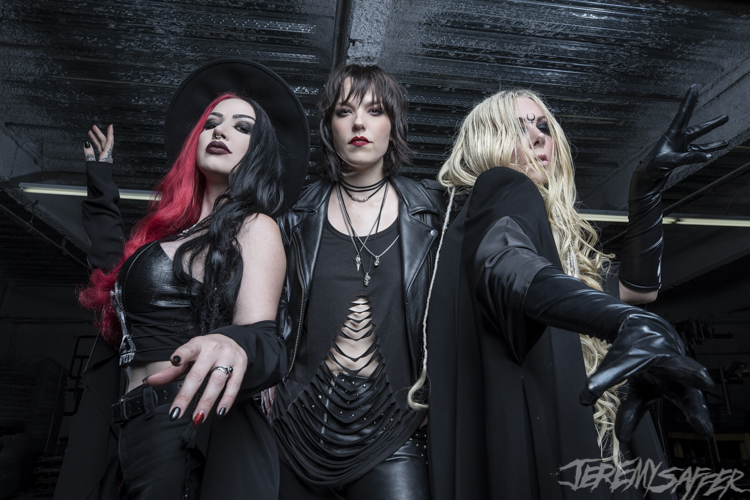 Grammy-winning hard rock band Halestorm and Atlantic-Roadrunner band, In This Moment, have announced a third leg of their all-female fronted tour, with New Year’s Day supporting. These new dates begin November 16 in Norfolk, VA and will run through December 16, closing the run in St. Petersburg, FL.

“You asked for it, and now you’re gonna get it,” said Halestorm frontwoman Lzzy Hale. “I’m so excited to announce the third leg with my empowering, beautifully Vicious women! Three tours and we don’t show any signs of slowing! We are joined by our friends in In This Moment and New Years Day starting in November! Get your tickets now because you don’t want to miss this!”

“We are so beyond excited to be announcing the third leg of such an empowering and beautiful tour,” said Maria Brink of In This Moment. “We knew after completing the first leg that this was something people were going to be paying attention to, and it felt strong, it felt powerful, and it felt liberating. I am so excited to see everybody at the upcoming shows!”

“Touring with Maria and Lzzy has been, by far, the best touring experience I’ve ever had,” said Ash Costello of New Years Day. “I am lifted up and supported by the amazing women of this tour, and everyone feels as if they are family who are rooting for each other to kill it every single night. The positivity is incredible on a personal level. Not to mention, the shows are absolutely ferocious. I am honored to be on stage with these incredible women of metal and rock once again! And honestly, I hope there’s no end in sight!”

Tickets will go on-sale this Friday, July 27, the day of Halestorm’s fourth album, Vicious, release. Pre-orders are still available for the album here. This Friday also sees all three bands kick off the second leg of the tour at Kansas City, MO’s Silverstein Eye Centers Arena.

Halestorm released their third single, “Do Not Disturb,” from Vicious, and the first single released from Vicious, “Uncomfortable,” is in the top 10 active rock radio. Vicious was produced by Nick Raskulinecz (Foo Fighters, Alice In Chains, Rush), and recorded at Nashville, TN’s Rock Falcon recording studio.

In This Moment’s latest album RITUAL arrived in July 2017 on the back of the Top 10 single “Oh Lord.” The album landed at #1 on the Hard Music Chart, #3 on the Rock Chart, #9 on the Top Current Albums Chart, #10 on the Digital Albums Chart, and #23 on the Top 200. The critically lauded album also included the hit singles “Roots” and “Black Wedding,” the latter featuring an assist from Judas Priest’s Rob Halford. Vocalist Maria Brink and guitarist Chris Howorth recently recorded a brand new song, “The Calling,” which coincides with DARK NIGHTS: METAL DELUXE EDITION. Listen here.

The band also made a stunning top 10 chart debut with 2015’s acclaimed BLACK WIDOW. It was the band’s fifth full-length release and arrived at #8 on the SoundScan/Billboard 200, while also entering Billboard’s “Hard Rock Albums” tally at #3. BLACK WIDOW featured a string of rock radio hits, including “Sick Like Me,” “Big Bad Wolf,” “Sex Metal Barbie,” and “The Fighter.” Official companion videos – all co-directed by Brink – are streaming at the band’s official YouTube channel. Furthermore, In This Moment’s 2012 album, BLOOD, has been certified Gold by the RIAA, as have both singles “Blood” and “Whore.” A remarkable accomplishment, the companion music video for “Blood” has been viewed over 27 million times.

Known worldwide for their dramatic and cinematic live performances, In This Moment have received rapturous praise in a range of national outlets. “One of the most unique, diverse and theatrical live acts you could witness in heavy music today,” raved Loudwire. “Not only are they a powerhouse sonically but visually they are beyond captivating… the production, sound and overall professional level of their concert experience has been elevated.”

Formed in Orange County, Calif. by Ashley Costello, New Years Day shook the scene with their Century Media debut, Victim to Villain, in 2013 featuring their breakout single “Angel Eyes.” The five-piece later cemented their place in the heavy music landscape with theirEpidemic EP and critically-acclaimed Malevolence full-length in 2015, clocking more than 20 million views on YouTube. The band has since become the most visually-captivating group in modern rock, playing for millions of fans around the world, sharing the stage with Ozzy Osbourne, Nine Inch Nails and Five Finger Death Punch while also headlining the longest-running touring festival in 2017. As new challenges and new worlds beckon, the band released Diary of a Creep in January to pay tribute to the artists who shaped them thus far –stream their cover of Garbage’s “Only Happy When It Rains ft. Lzzy Hale” now.

HALESTORM + IN THIS MOMENT

All dates with Special Guests New Years Day unless noted.