ANAHEIM, Calif. – January 25, 2018 – At the opening Breakfast of Champions session of The 2018 NAMM Show, legendary musician, songwriter, GRAMMY® Lifetime Achievement Award recipient and Rock & Roll Hall of Fame inductee Bob Weir was presented with the National Association of Music Merchants (NAMM) “Music for Life” award. The award honors his inspiring five decades-long career of influencing musical styles, sound design, and the music business, as well as the many risks he and bandmates took along the way to become the iconic band that they are today.

The award was presented by NAMM President and CEO Joe Lamond, who introduced Weir with acknowledgement of his pioneering spirit, which has helped define popular music over the last 50 years: “The Grateful Dead inspired a movement by taking incredible risks musically, culturally and in terms of how they approached the music business,” said Lamond. “They did so out of a passion for music making and, as a result, continue to inspire musicians to this day. We’re honored to present Bob Weir with the Music for Life Award for this his unabashed passion for music making, support for music education and so many more achievements in his long career.”

Weir offered a bit of creative wisdom for the audience of music professionals. “If you’re always going for it, the muse is always leading you in some direction. If you have faith in your muse, you’re going to get somewhere — if you put shoulder to the wheel. Every artist of any stripe is a storyteller, and the way you weave it together represents what makes life worth living.”

Risk is a term that has defined the duration of Weir’s career as one of rock’s finest and most distinctive rhythm guitarists. He’s currently a member of Dead & Company, which features Grateful Dead members, Mickey Hart and Bill Kreutzmann, along with singer-songwriter John Mayer, Oteil Burbridge and Jeff Chimenti. Weir will tour this spring with fellow Grateful Dead member Phil Lesh, for special duo performances, at Radio City Music Hall in New York, Wang Theater in Boston and Chicago Theater in Chicago. Weir has also recorded and performed with many acts including Bob Weir and the Campfire band which features members of The National, The Other Ones, Kingfish, Bobby and the Midnites, Scaring the Children, Ratdog and Furthur (co-led by Phil Lesh).

Weir recently struck a partnership with D’Angelico Guitars for the Bob Weir signature SS model, which won the Editor’s Choice Award for Guitar, Amps, and Accessories at the 2017 Summer National Association of Music Merchants (NAMM), while Music and Sound Retailer recently named the model Electric Guitar of the Year for 2017. Musical Merchandise Review (MMR) also nominated the Premier Bob Weir SS for Dealer’s Choice Award in the Electric Guitar category. The company says “his penchant for risk-taking in the world of instruments is akin to his contributions to music—he’s restless in the best of ways. Working alongside Bob to design the guitar was a masterclass in dedication to innovation, yielding an instrument equally impressive in versatility, aesthetic, and craftsmanship.”

Weir has also partnered with Pigtronix to develop Bob Weir Real Deal Acoustic Preamp. Pigtronix, says he has a “one-of-a-kind sonic ambition” which has “has challenged the Pigtronix sound design team to reach beyond the realm of conventional guitar effects.”

In 2016, Weir received the inaugural Les Paul Spirit Award and was honored with a Lifetime Achievement Award from the Americana Music Association. Also in 2016, Weir released Blue Mountain on Columbia/Legacy/ROAR, his first album of solo material in more than 10 years and his first album of entirely original material in more than 30 years. The album received raves from critics, including NPR, which praised its “stately, autumnal, metaphysical cowboy songs.” 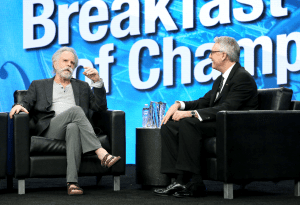 The “Music for Life” award is NAMM’s highest honor and recognizes individuals or organizations that exemplify NAMM’s vision of music making as a precious element of daily living for everyone. Past recipients have included business leaders, public officials, and musicians, including Graham Nash, Stevie Wonder, Yoko Ono, Henry Mancini, Smokey Robertson and the 2017 recipient, Robbie Robertson. It is awarded each January during the global music products gathering, The NAMM Show, held in Anaheim, California.

Images are available with credit to ‘Jesse Grant/Getty Images’