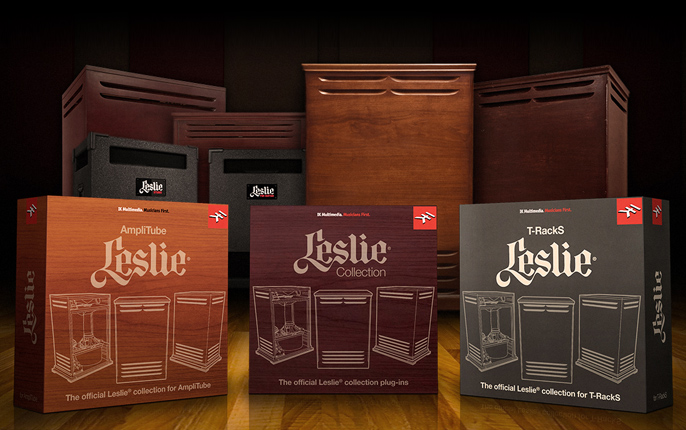 IK Multimedia is pleased to announce the official Leslie collection, a new collaboration with the product designers and R&D Team at Hammond USA and Suzuki Music Corp. of Japan, bringing the truly authentic sound of the legendary Leslie® amps and cabinets to the leading guitar amp and effects software, AmpliTube, and to the world-class mixing and mastering processors in T-RackS.

AmpliTube Leslie and T-RackS Leslie offer the authentic sounds of 5 Leslie amps and 6 Leslie rotary-speaker cabinets that can be used for recording or playing live. Microphone distance and position control, precise level balancing, different amp and cab combinations, circuit overdriving, width, acceleration and deceleration control of the rotary speaker, horn/drum balance and more are included to give tracks the shimmer, charm, growl, and character that are an unmistakable part of the Leslie sound.

There are many rotary speaker emulations. There’s just one Leslie®

With the powerful combination of IK’s breakthrough technologies of Dynamic Interaction Modeling™, which can reproduce the subtlest interactions of an electronic circuit down to its tiniest component, together with Volumetric Response Modeling™, which recreates the real acoustic behavior of rotary-speaker cabinets, the IK and Hammond teams succeeded in delivering the true Leslie speaker sound without compromise.

AmpliTube Leslie and T-RackS Leslie have the distinct advantage over others with circuit-modeled amplifiers which are critical to recreating the signature tone of these incredible units, especially when overdriving the amp circuit, typical of genres like rock and blues. There are 5 amp models included: Leslie Type 147, Leslie Type 122 – vintage tube model; Leslie Type 122A – new tube model; Leslie 3300w – new hybrid amp and the Leslie G-37/Studio 12 – new hybrid amp.

The virtual microphones in AmpliTube Leslie and T-RackS Leslie can be repositioned. This affects the perception the listener will have of the rotation, or “Doppler effect”. Users can choose between a 90° mic position, which is the most common, giving a non-symmetric perception of the rotation, to the 180° mic position, which is less common, but heard on many famous recordings, and gives a more symmetric perception of the rotation. It is also possible to move the virtual microphones closer or further from the cabinet for even greater realism when recording. There is a full parametric EQ to further shape the sound to fit a variety of musical ideas even better.

Changing the rotation speed of the horn and drum is also possible allowing users to adjust the range of speed from slowest to fastest for their ideal performance settings. It is also possible to change the acceleration and deceleration speeds to control how quickly the speaker goes from “chorale” (slow) to “tremolo” (fast).

Preorder AmpliTube Leslie or T-RackS Leslie at a special introductory price of only $/€99.99 and the Leslie Collection can be pre-ordered for only $/€149.99.