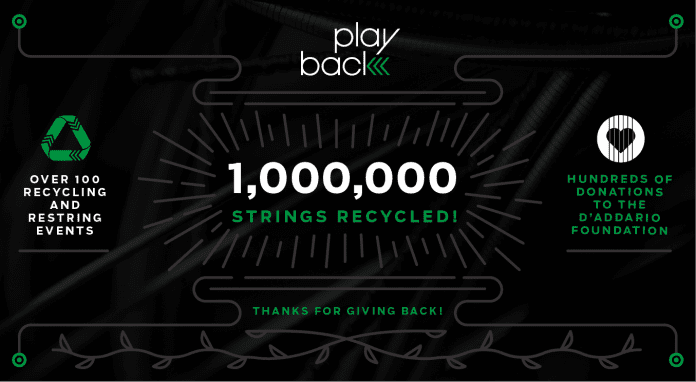 Since its launch in 2016, Playback became the world’s first-ever industry-wide instrument string recycling program, expanding on the company’s goals of creating positive social change, minimizing its carbon footprint, and reinforcing its role as an environmental leader in the music industry.

Teamed with the global recycling organization TerraCycle, the Playback program doubled in size in 2017, and D’Addario exceeded its cumulative goal of 1 million strings in just ten months for the year. Playback now includes more than 400 retail recycling locations around the U.S., including Heid Music, Willis Music, Mississippi Music, and all Guitar Center locations, and has supported 125 guitar recycling/restrings events at music instrument retailers across the country.

Many D’Addario partner guitar brands have also jumped on board to recycle used strings at their manufacturing facilities, including Breedlove, D’Angelico, ESP, Ibanez, Reverend, Supro and more. D’Addario artists also collect strings on the road, including U2, Dave Matthews Band, My Morning Jacket Alabama Shakes, The Goo Goo Dolls and Dispatch. Sponsored festivals have also become hubs for Playback string collection, including events such as Afropunk, SXSW, Grey Fox Bluegrass Festival, Telluride Bluegrass Festival, Americana Fest and many others.

Playback is also part of D’Addario’s Players Circle loyalty program – once registered, members who recycle strings are rewarded with points which can be redeemed for new sets of strings, picks, gear and other accessories. The points can also be used to Play It Forward – members can donate their points to D’Addario’s non-profit organization, the D’Addario Foundation, to help fund music programs in underserved communities.
For information on the Playback program and to find a restring event near you, please contact a D’Addario sales rep or visit: www.daddario.com/playback