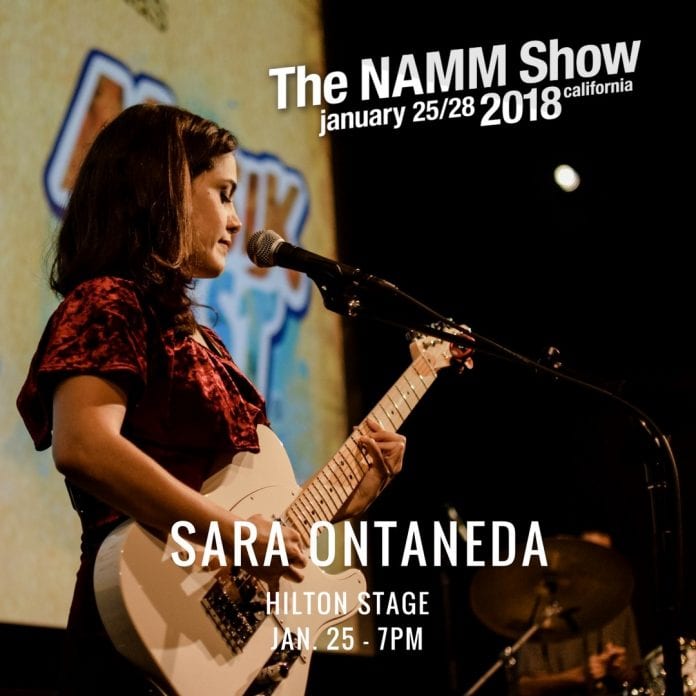 Singer-Songwriter Sara Ontaneda kicks off 2018 in high gear. The artist has been chosen by the National Association of Music Merchants to perform at the The NAMM Show, which takes place between January 25-28, 2018 in Anaheim, California. Sara Ontaneda will take the stage on Thursday January 25, 2018 at 7:00 PM at the NAMM Hilton Stage. The NAMM Show is the global crossroads of the music, sound and event technology products industries with more than 100,000 registrants from 139 countries and regions.

2017 was an important year for Ontaneda, who released her critically acclaimed debut album “Entre Espacios y Colores.” Sara Ontaneda tells her story in nine beautiful singles, five in Spanish and Four in English. The first single is titled “Aprovechar.” All of the songs were penned by Ontaneda, whose music blends folk, indie pop and South American rhythms to create an alternative pop sound, that complement beautifully the singer’s melodic voice. The release was followed by the tour in Latin America and the United States.

The Ecuadorian-American Singer will release the new single “Huecos” in January 2018.

Watch the video for Aprovechar:
https://www.youtube.com/watch?v=zaRuO245PnE

About Sara Ontaneda: Sara Ontaneda is an Ecuadorian-American singer-songwriter based in New York City. Her music mixes Folk, R&B, and South-American rhythms. Sara discovered her passion for music at a young age. At age 7 she started piano lessons and at age 9 she joined her school’s choir in Miami, Florida. At age 13, she moved to Guayaquil, Ecuador where she learned that she was serious about music. She studied classical music in the conservatories in Guayaquil and at the same time discovered she enjoyed contemporary music as well. Sara joined jazz and bossa nova bands which led her to perform in important Ecuadorian venues like Diva Nicotina, Teatro Centro de Arte, and Teatro Sanchez Aguilar. It was during her teens that she began her singer-songwriter phase, and recorded/produced her songs at a mentor’s home studio, Susy Nickel Productions. The love for music led her to the prestigious Berklee College of Music where she majored in Contemporary Writing and Production. She graduated with honors and received scholarship awards for her efforts. In August 2014, Sara released her single “Pero Hoy”, under the CVRA LVDORVM (Ecuador) label. The song is available on all digital platforms, and is played constantly in Ecuadorian radios. After a year of hard work, Sara finished her first EP, “Marte y Júpiter” where she took the roles of writer, recording engineer, and producer. The EP was released on July 14th, 2015 and is available on all digital platforms. It received numerous positive reviews from journals in Latin America and Spain. This led Sara to tour in Ecuador as well as many cities of the US, including festivals like SXSW 2017, Outside The Box Boston, South Florida Folk Festival, and others. On March 2017, Sara released her debut album, “Entre Espacios y Colores” which includes 4 songs in English and 5 in Spanish. Sonically, the album blends South-American, R&B, and Alternative elements and is often described as Nu-Latin. The album has been reviewed positively in many journals of the US and Latin-America.