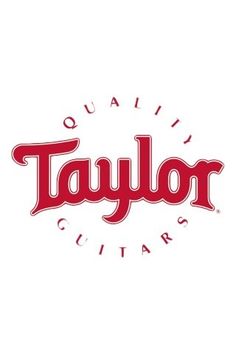 A HISTORY OF INNOVATION

Taylor Guitars is widely known as an innovation-driven company, producing an array of revolutionary improvements to the acoustic guitar over the company’s 43-year history. Since joining the company in 2011, Andy Powers has brought other game-changing modifications to the Taylor line, including a comprehensive redesign of Taylor’s flagship 800 Series, the introduction of small-body 12-string guitars, and a slew of nuanced bracing enhancements, implemented across the entire Taylor line. The sonic improvements have earned Taylor numerous industry awards along the way.

However, Powers felt that in order to continue making improvements in sound, an entirely different bracing approach was needed. Despite X-bracing’s effectiveness and enduring popularity, by design, it forces a trade-off between volume and sustains, in which increasing one comes at the expense of the other.

Inspired while surfing one day and watching waves rolling in on the San Diego coast, Powers conceptualized the V-shaped bracing design. It gave him the idea to position two longitudinal braces on the soundboard of the guitar in a V formation, with the top of the V splayed along either side of the soundhole, instead of arranging the main support braces as a criss-crossed X.

The new V pattern added stiffness lengthwise along the top, in the direction of the strings, creating longer-sustaining notes, while fan braces extending out from the lower part of the V controlled the flexibility across both sides of the lower bout, enabling the top to produce more volume.

Powers also realized that because the bracing pattern created a more orderly response from the top, it could also resolve intonation imperfections that have long-plagued the acoustic guitar, especially when playing up the neck. Essentially it puts the top more in tune with the strings. As a result, the new V-Class bracing system creates truer, more orderly notes that don’t cancel each other out or produce dissonance or a wavering, “beating” effect.

“By modifying the bracing architecture to change the way the guitar vibrates, we can make the guitar respond more readily to what a musician brings to the strings,” says Powers.

In its completed form, V-Class bracing delivers a deeply satisfying playing and listening experience. It brings the whole fretboard into greater sonic alignment. Harmonics ring more uniformly down the neck.
Notes are powerful and consistent in their tonal character across the guitar’s entire tonal register, without the erroneous frequencies that don’t belong. Chords are now a truer version of themselves harmonically.
The natural overtones can be heard more clearly, intensifying the unique sonic flavors of the tonewoods used for each instrument with V-Class bracing.

For the first time in Taylor’s history, all Taylor models crafted with V-Class bracing will include a new guitar label featuring the signature of Andy Powers. Bob Taylor’s signature will still be incorporated in the background.
“This is something I wanted,” Taylor says. “Andy is really at the forefront of our designs now. It’s a joy for me to be able to be a part of this while I’m alive. Andy’s design gets us into a whole new lane that’s wide open and goes farther. You can hear the improvements; they’re undeniable. And this is just the beginning.”

Taylor is thrilled by what Powers’ new V-Class bracing architecture means for the future of guitar making at the company. As another truly original Taylor design, it reinforces the company’s unique identity in the guitar world and helps preserve its innovative drive to improve the music-making experience with inspiring new guitars. 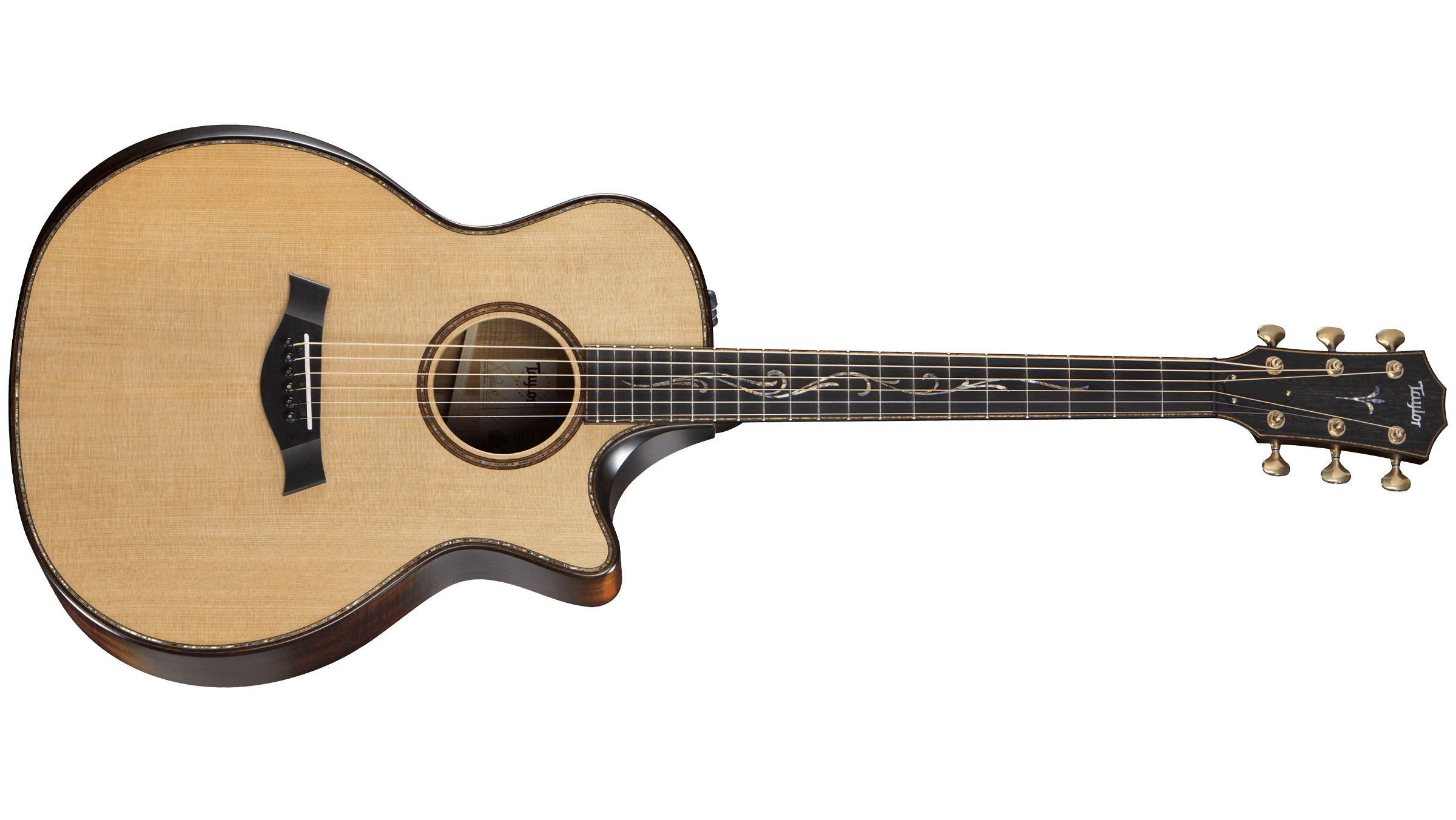 This stunning Grand Auditorium from Taylor’s new Builder’s Edition collection touts Hawaiian koa back and sides paired with a torrefied Sitka spruce top. Builder’s Edition features enhance playing comfort in the form of ergonomic new body contours including a beveled armrest, beveled body edge treatment, and a reshaped cutaway that flows smoothly into the heel and incorporates a finger bevel where the cutaway meets the soundboard. This creates a more fluid path to the guitar’s upper-register notes for your fretting hand. Other refined touches include “silent” satin finish, which helps quiet the incidental noise against the guitar body, and a gorgeous new Kona burst that highlights the natural beauty of the figured koa back and sides. In every way, this K14ce embodies the ultimate player’s guitar and testifies to the benefits of innovative craftsmanship. Street Price: $4,999. 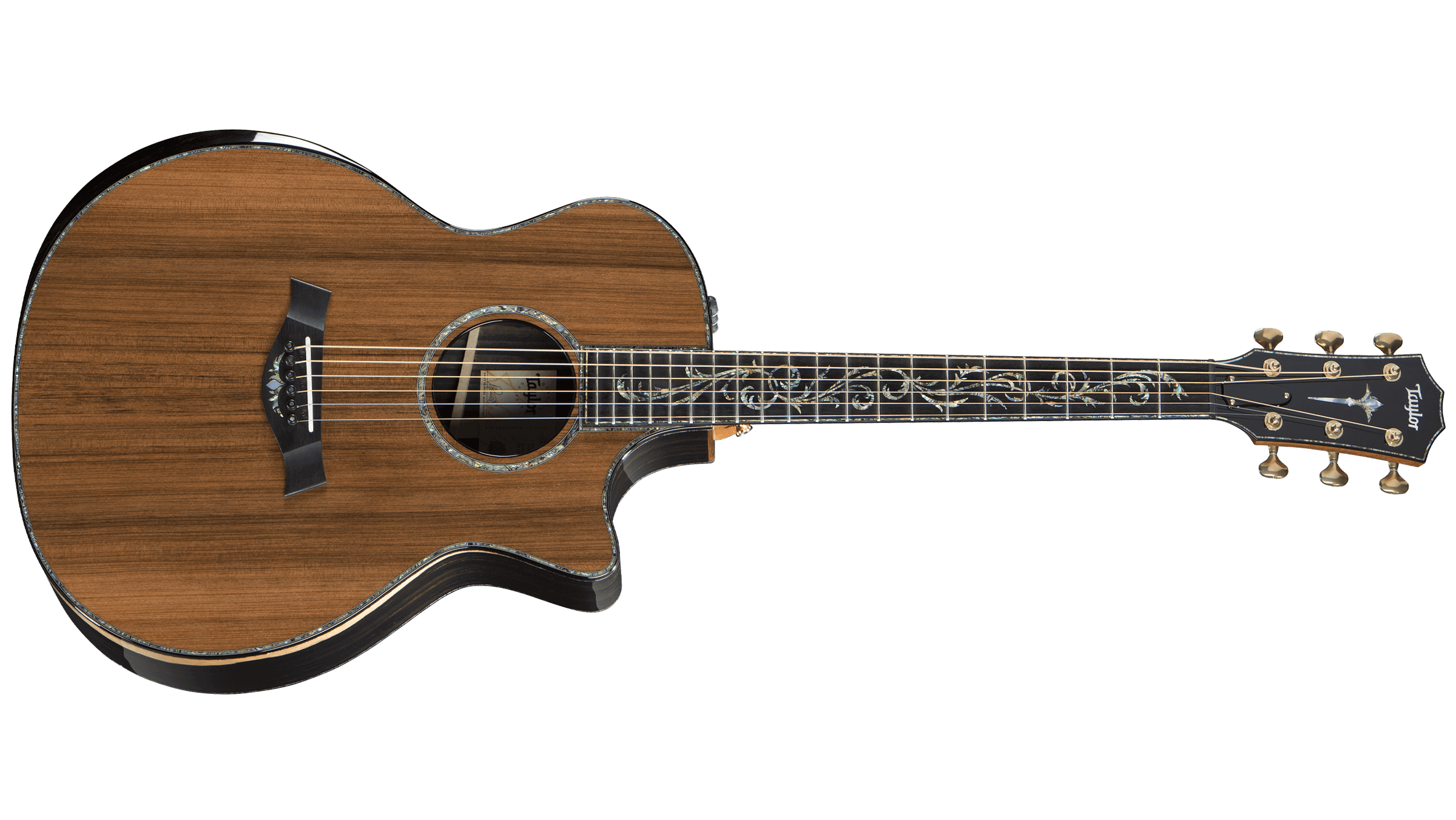 The capstone of the Taylor line, the Presentation Series was recently updated to feature back and sides of magnificent striped West African ebony. This cutaway Grand Auditorium paireds the ebony with a beautifully variegated sinker redwood top featuring new V-Class bracing. Sinker redwood blends the overtone warmth of cedar with the punchy attack of spruce, and together with the West African ebony, delivers a rich, dynamic voice capable of performing in a wide range of styles. Other luxurious features of the series include a beveled ebony armrest, an elaborate Nouveau inlay in paua and pearl, a paua rosette,
paua edge trim, premium Gotoh 510 tuners, and a black graphite nut exclusive to V-Class models. Street Price: $8,999. 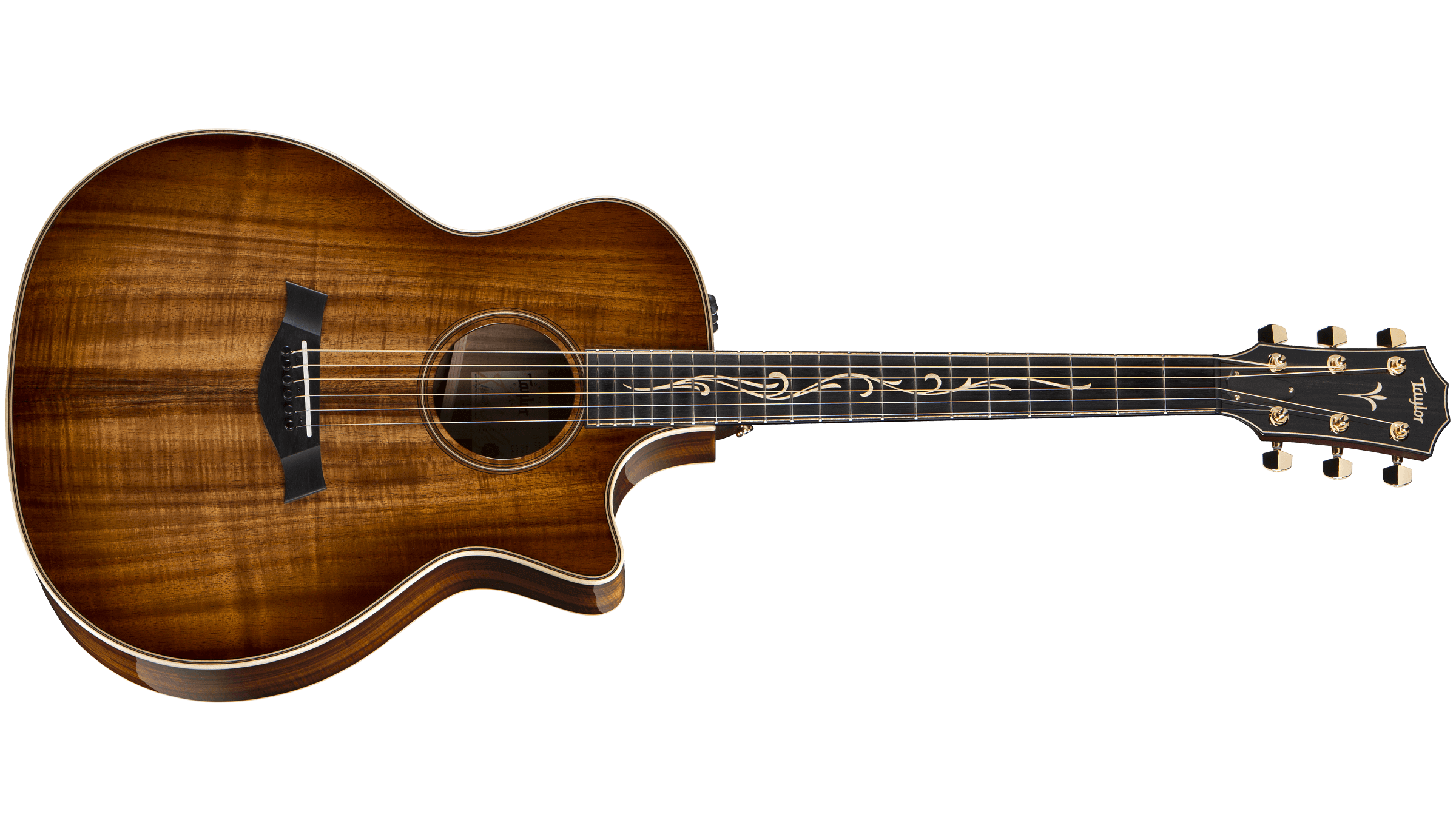 This beautiful all-koa Grand Auditorium will inspire players in both looks and sound. The hardwood koa top helps produce a balanced response across the tonal spectrum, with a clear, focused voice. Together with V-Class bracing and Taylor’s popular Grand Auditorium body, the musical versatility makes this a guitar that can cover a lot of ground. Visually, koa’s shimmering figure is highlighted with organically styled appointments that include a new Spring Vine inlay in maple, with maple binding and top trim adding a creamy counterpoint against the shaded edge burst finish that surrounds the entire guitar. Street Price: $4,499. 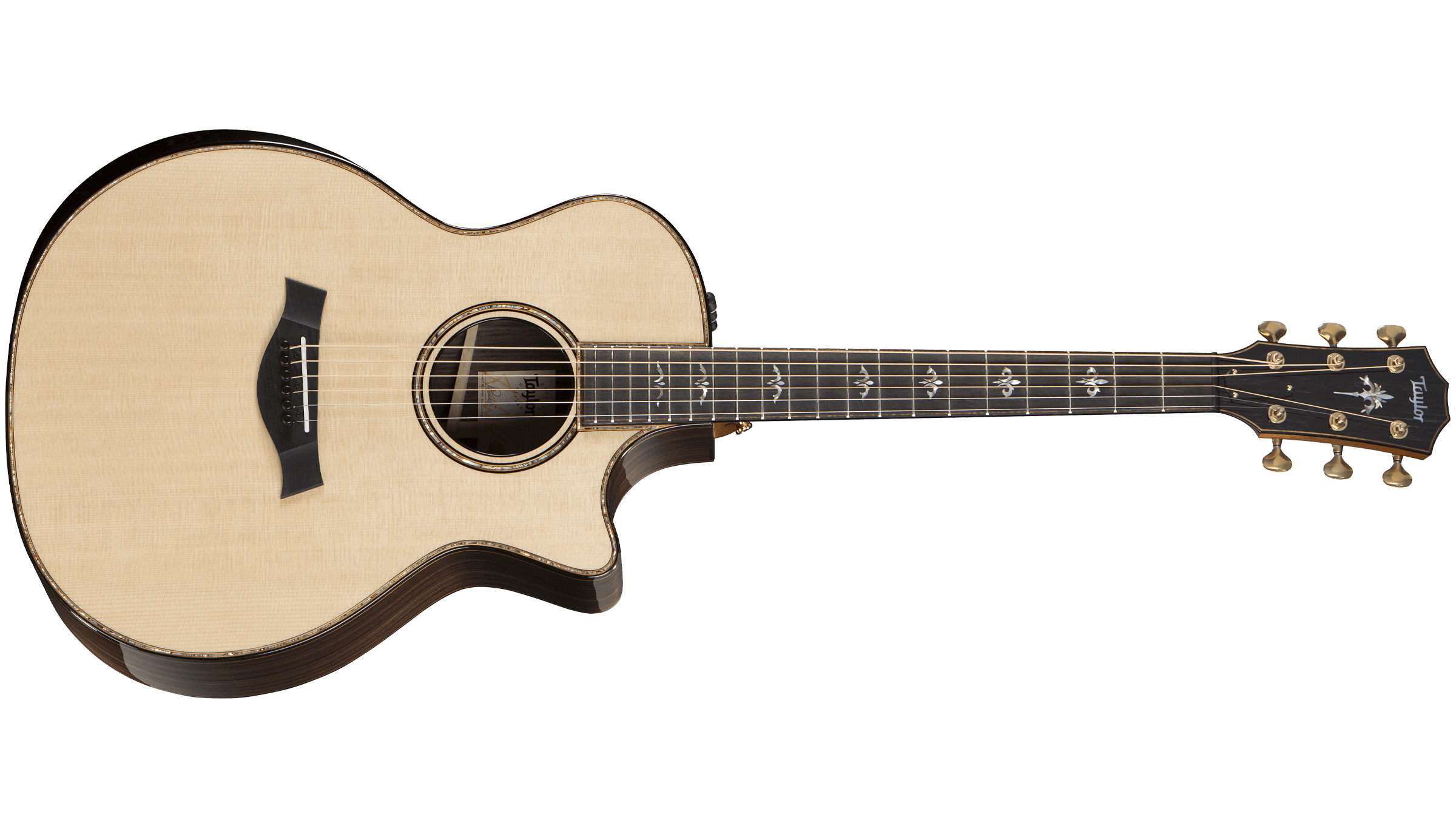 The 900 Series stands out as Taylor’s most luxurious class of rosewood guitars, blending a raft of tone-enhancing details with premium aesthetic features. Players who love the deep lows and sparkling highs of rosewood will appreciate how well behaved the overtones are as notes bloom. Premium features include a beveled ebony armrest that makes your picking/strumming arm more comfortable, along with Gotoh 510 tuners, whose 21:1 gear ratio allows for precise tuning. Refined appointments include ebony binding, Ascension fretboard/peghead inlays in paua and pearl, a paua rosette with koa and ebony purfling, and paua/koa trim along much of the body and neck. Street Price: $4,999.