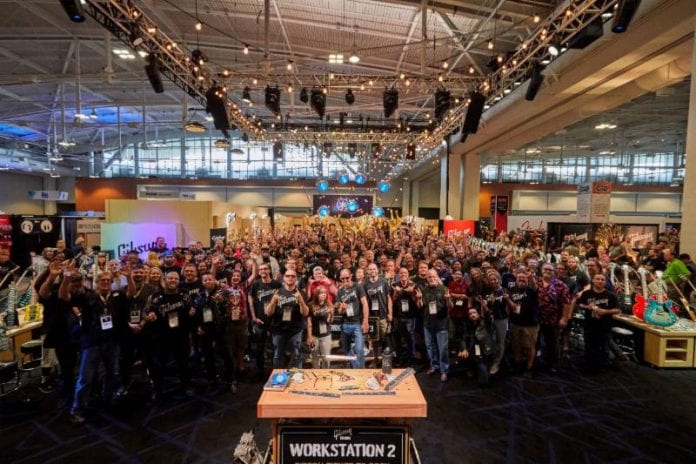 After an impactful re-launch at Winter Namm, artists, players and fans are continuing to experience Gibson, the all American-made instrument brand, rejuvenated. Gibson ignited its new era at SUMMER NAMM 2019 with a massive, onsite presence showcasing exciting new collections, hosting the hottest live concert of the week and launching boutique builder collaborations, as well as, brand-new artist programs for musicians worldwide in the brand’s hometown of Nashville, TN.

On Thursday, July 18, Gibson’s SUMMER NAMM kicked off at Music City Center with a special media luncheon. Gibson CEO, JC and Jim James (solo artist and frontman for My Morning Jacket) as well as Nathaniel Rateliff (solo artist and frontman for Nathaniel Rateliff and The Night Sweats) were on hand to talk to the media about the launch of the Gibson Foundation. Jim James announced his collaboration with the Gibson Foundation as well as establishing a program for supplying musical instruments to underserved students in underfunded schools that have a passion to learn to play. Jim also pledged to donate proceeds of the sale of his forthcoming Jim James Gibson ES-345 signature guitar to programs that benefit youth music education.

The Gibson booth and experience at SUMMER NAMM 2019 brought out a stunning array of new guitars, gear and collaborations to the largest and most-attended area inside Music City Center. SUMMER NAMM also represented a series of achievements with top awards and press accolades for new guitars with Guitar World magazine awarding “Best Of NAMM” to the “Vivian Campbell Holy Diver Les Paul” from Epiphone, out August/September 2019. The Gibson “Les Paul Standard 50s” from the new Original Collection was crowned again as “Best New Electric Guitar” from the editors of Guitar, Total Guitar and Music Radar magazines. Premier Guitar magazine called out Editor’s picks for the Epiphone “Texan,” the Kramer “SM1” and stated, “There were so many Kramer and Steinbergers around, I thought, I’ve gotta go try those and I have to admit I had a blast. They felt so good! I just cranked up the gain, I had a great time. Gibson seems committed to making cool guitars again and getting those few neglected brands (Kramer, Steinberger) back in the mix.”

SUMMER NAMM also marked the festival debut of the new G-45 Series Collection; the G-45 Standard and G-45 Studio guitars. Hand-crafted by skilled artisans at the Gibson acoustic facility in Bozeman, Montana–who build the most cherished and iconic acoustic models–the G-Series offer players of all levels the perfect mix of tone and performance with traditional Gibson style and value. Watch the SUMMER NAMM recap of the Gibson Acoustic guitars: Here.

In a review, Premier Guitar described the new G-45 Standard, “This is built in the Gibson Factory by the same people building the J-45 and all of their top shelf acoustic guitars, same plant, same people. It’s a great guitar. The G-45 Standard comes in at about 1300.00 and they make a studio version that’s about a grand. There is something about the sloped shoulder, 45 sound that just is its own thing. They’re just killer. Pretty cool that a kid that mows lawns for the summer can afford a new Gibson acoustic that you can gig with. It does everything. Good on you Gibson for making a really affordable acoustic guitar in your Bozeman plant, it’s cool the way you are re-inventing yourself as a company.”

Friday and Saturday continued with the massive Gibson booth in the center of Music City Center being the most-frequented area at SUMMER NAMM 2019. The newly released Gibson Original, Modern, Custom Shop Collections as well as the recently launched String Collections were on display in full at the festival. Featuring the Les Paul Standard 50’s, Les Paul Standard 60’s, Les Paul Special in TV Yellow, Les Paul Junior in Tobacco Burst, the SG 61 Standard with factory stop-tail, Maestro and Sideways vibrolas, SG Special and Junior, the classic ES-335 Figured and DOT, Firebird, Flying V and Explorer, the J-45 and Hummingbird as well as the J-200, the Gibson Original Collection brings classic design, innovation and authenticity back into the hands of Gibson fans. The Gibson Modern Collection builds on Gibson’s solid legacy of coveted innovation by introducing modern features players have embraced, such as lighter-weight bodies, push-pull systems to switch between the Burst Bucker and P90 sounds, innovative slim-taper necks with asymmetrical profiles, shaved heels for effortless access to the highest frets as well as maximum sustain and stability. The Les Paul and SG Modern, Les Paul Studio and Tribute models, the new ES-235 and modern versions of the ES-335, Flying V and Explorer B-2, and modern Hummingbird, J-45and J-15 as well as the Parlor acoustic models round out the Gibson Modern Collection. As the pinnacle of craftsmanship, quality and sound excellence, Gibson Custom Shop celebrates Gibson’s legacy through accuracy, authenticity and attention to detail. This year, we celebrate the 60th anniversary of the 1959 Les Paul Standard, the holy grail, this release marks our most historically accurate recreation of the most iconic guitar in history. Custom Shop also brought in the stunning new Brian Ray SG Jr, historic 1964 SG, the Johnny Winter Firebird 5, a new Flying V and the just released Dave Amato Les Paul Axcess Standard and Lee Roy Parnell 1959 Les Paul Standard as well as and many others to aspire to. Watch the Custom Shop run through at SUMMER NAMM: Here.

With a clear focus on quality, in a short period of time the new team at Gibson have created a more confident Dealer and Artist base, invested in a renewed commitment to the brands under the Gibson umbrella, including Epiphone, Kramer, Steinberger andKRK Systems. Gibson has proven they can listen to the market and create compelling, relevant and high-quality guitars as well as set the stage for the next era of instruments. By leveraging its iconic past and leaning into the future, Gibson has ignited its new chapter as the guitar of choice for artists across generations and genres of music.

Check out the live photos from Gibson’s opening party for SUMMER NAMM at The Wildhorse: 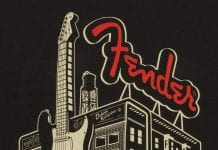