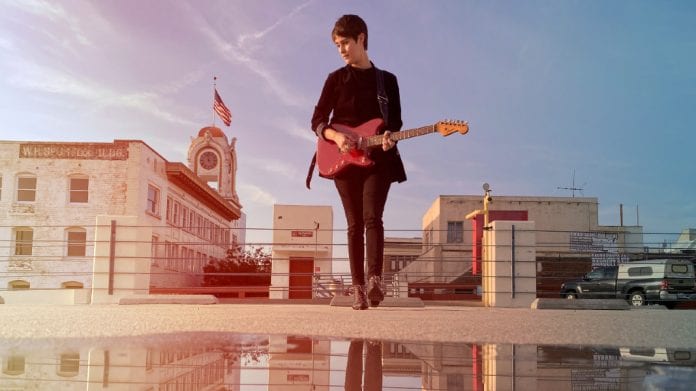 Santa Ana-based queer indie-folk and rock artist Ali Coyle releases her debut EP, Songs For My Therapist, a collection of songs about love, self-doubt, identity, forgiveness, and healing, i.e. at long last finding yourself after an arduous search.

Growing up in Orange County, California, Ali was drawn to music early on, studying classical violin, followed by guitar. Later, at age 17, she traveled abroad to Ireland, where she connected with her heritage and began writing and singing folk music. Before long, she encountered Dave Tweedie, who became her musical mentor, collaborator, and producer.

Moving to East Los Angeles, she played in a succession of bands while living in an artist warehouse. Eventually, the community parted ways, leaving Ali sapped and discouraged. Relocating to Santa Ana, she confronted an “epic existential crisis.” Rather than surrendering, Ali focused her emotional turmoil on her music, writing, and recording material for Songs For My Therapist.

Encompassing six tracks, Songs For My Therapist begins with “Trust Me,” a song Ali shares is about “having hope, falling in love, and taking a chance.” Opening on gentle, shimmering colors topped by Ali’s luscious voice, “Trust Me” features gleaming layers of sparkling hues riding a syncopated rhythm enveloped by a cavernous bassline. Sumptuous horns inject the tune with exotic tendrils of silky tones.

Highlights include “Paradise,” which offers a thumping kick-drum crowned by an austere, gleaming guitar and wavering textures, while Ali’s deluxe, rich timbres, along with glowing harmonies, imbue the lyrics with dreamy, wistful shadows.

“On My Way Again” pushes out trembling coloration rife with bluesy tints and dollops of pop tangs. Whereas “Clear Water,” according to Ali, “was recorded primarily using my looping pedal with sounds pulled and reversed to create orchestral-like effects that made the raw and emotional vocals carry more importance.”

Ali Coyle has it going on! Songs For My Therapist is at once captivating and alluring, all capped by Ali’s crème de la crème vocals.