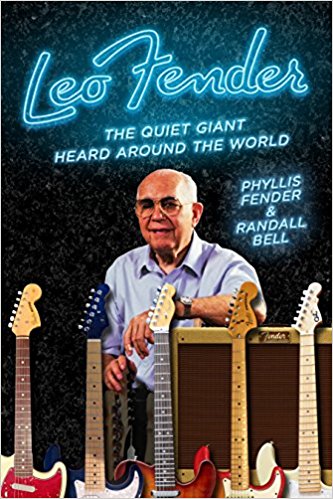 Leo Fender:  The Quiet Giant Heard Around the World is a lovely tribute from Phyllis Fender to the simple, yet complex man that impacted the world of music. The reasoning behind the book? In the introduction, Mrs. Fender explains that there’s a plethora of books on the market today behind the iconic Fender guitar, but she wanted the world to learn more about the man behind the guitar.

This is her tribute to the man that we all know as the genius that amplified a solid body guitar, impacted the sound of music, and became a household name and iconic figure in the music industry; but, to her, he was simply her husband, my “Leo.”

Co-written with Randall Bell, Ph.D., he and Mrs. Fender spent countless hours at Polly’s Pies in Fullerton, California sifting through documents and photos; researching and making notes of the memories they both shared from their time spent with Leo Fender. Dr. Bell grew up in the same neighborhood as the Fenders and his father led the R&D department for Fender, so he was very familiar with the life and times of Leo Fender.

This treasure of work walks us through Leo Fender’s life from his birth to his ultimate demise in 1991 as told by his second wife, Phyllis Fender, through the memories and stories Leo shared with her. From his meager beginnings and upbringing on a farm in Fullerton, California, to persevering through physical disabilities, and his relentless desire to pursue an education and to learn about anything mechanical. He took a chance at opening his own radio repair shop after being laid off from several accounting jobs; and through his hard work and determination, he ultimately became the inventor of some of the finest amps and electric guitars in the world- a company that would dominate the music industry for years.

He was simple, humble, unassuming, a smart business man, entrepreneur, inventor, workaholic, world-renowned individual, award winner, husband and father, and a Rock and Roll Hall of Fame Recipient, but it was his relentless pursuit of perfection and his deep love for music (and the angels that brought us that music) and his guitars that catapulted Fender to its iconic status that lives on today.

Phyllis Fender lovingly refers to Leo Fender throughout the book as “my Leo.” The book is not all about the guitars. It’s about Leo Fender the man. It’s easy to read, full of history, and features photos depicting the Fender Radio Repair shop in Fullerton, symbols of the Fender name throughout Fullerton, photos of the Fender plant, his family and vacations, his office at the G&L plant which is exactly as he left it, and rock stars with Fender guitars. It ends with what they refer to as a “driving tour” of Fender’s life showing the schools he attended, the modest homes he lived in, and even his favorite “Sizzler” restaurant.

Reading this book, being involved in the music industry, and having lived in Southern California, I thoroughly enjoyed the photos and history of Fullerton. I even had to take a trip to Fullerton on my last visit to California to see some of the sites myself! I recommend the book for anyone wanting to learn more about the man behind this iconic brand.  (Leadership Institute Press; 2017; $14.99) 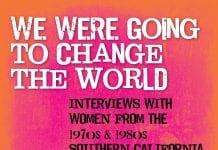 Book Review: We Were Going to Change The World