We are proud to premiere New York-based singer-songwriter Alexa San Román’s new upbeat, pop-punk single, “Rain Cloud,” from a forthcoming album, written during a difficult time in her life, feeling like a “rain cloud” was constantly hanging over her head.

“Rain Cloud” follows the previously released tracks “Messy,” a nostalgic pop/rock anthem that reflects on the mess that our lives can sometimes and “Stay Where You Are,” a hard-hitting alt/rock song about people who don’t want to put in the work to change their bad habits, and blame everyone else in the process.

Hi! My name is Alexa San Román, and I have been a guitarist and musician for more than half my life at this point! I grew up playing music in bands with a ton of collaboration in songwriting, but this is the first time I am actually releasing a solo album. It feels so weird to be doing all of this by myself, but I think this record was something I had to write for my own mental health reasons with no one else really involved. It feels really good to finally be at a point where I am releasing songs from the record and putting out videos, I kind of almost gave up on music for a minute there, so I am so grateful for the response I’ve gotten thus far on the few songs I’ve released.

This video is super important to me as it was shot in my childhood bedroom.  This song lyrics are also referencing the ceiling of said bedroom which my mother had painted with clouds when I was in middle school.  We always joked that it always looked like it was juuust about to rain at all times in my room… so I took that and ran with it for this.  I wish I had the budget or capabilities of making it actually rain in my childhood bedroom but we got creative!! 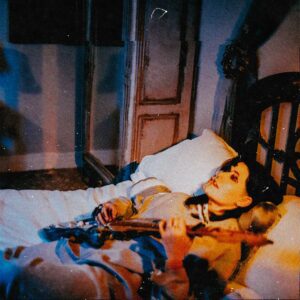 Tell us about the inspiration behind your new single “Rain Cloud.”

I wrote this song at a time in my life where I was going through a serious transitional period. I had experienced a ton of loss and grief and was faced with a serious reality check for the first time in my life. This song came after many, many months of constant grief and crying, and it’s about that moment AFTER you’re done crying, and everything just feels numb.

This song started out as just me and my guitar and eventually was produced into a full band version using Logic Pro on my laptop. I basically built the demo by myself, typing in drums and bass and then bringing that demo to Westfall Recording Company to actually track real instruments. I had my good friends Brando Hom (drums), Jackie Kalafut (guitar), and Holly Desautels (bass) play on this track and help me record it.

Love the music video. Where was the video filmed?

As I mentioned above- my childhood bedroom, lol. Never a dull moment at my parents’ house!

Absolutely; I recently posted some BTS moments on my Instagram from the shoot. My best friends and I actually made an entire weekend out of it and called it “Rock Concert Weekend,” where we stayed at my parents’ house and filmed three music videos! There’s a ton of footage that I have to sift through, but this video was particularly funny as I had to get soaking wet in my clothes… so I was tracking water across the hall into my room, and we had to rapid-fire do takes of the ending. Needless to say, there was a lot of laughing and yelling.

When did you begin playing guitar, and what inspired you to pick up the instrument?

When I was 15, I was super inspired to play guitar for a couple reasons… My older cousin, who I looked up to tremendously, started playing first (fun fact, the guitar I am playing in this music video was hers from when we were 15!). Also, the movie Freaky Friday really inspired me as well… which I think you can hear on my previous single, “Messy.”

Do you have a go-to guitar for songwriting?

It’s always a revolving door, but currently, my Ben Gibbard signature Fender Mustang has been my go-to!

I hope they can emotionally connect to it in any way… these songs helped me get through the darkest time in my life.  If I can share it with the world and even one person connects to it, I’d say I’ve done something to make a difference. That’s all I can hope for.