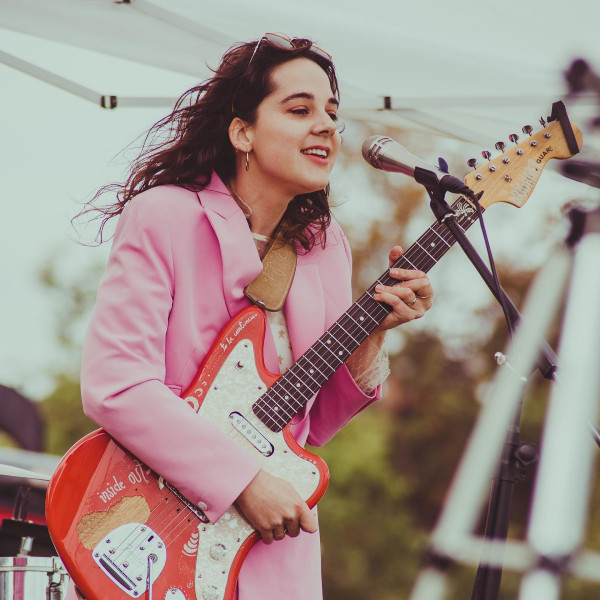 Los Angeles-based singer-songwriter Izzy Outerspace recently unveiled the single/music video for “Throw Me Into The Pool.”

Originally from Switzerland, where she immersed herself in “the lyricism of German rock band Die Toten Hosen, in the guitars and melancholy of bands like Blur, and in songwriters like Damien Rice,” she never grasped she could write her own music and sing.

Shackled by the “bulletproof” lives of those around her, where everyone went to college, held steady jobs, and then married, the beginning of her emancipation occurred when she moved to England to attend college, taking a degree in science. She fell in love, got married, and then moved to the U.S., where she plunged into acting and film.

Through it all, she played music, not realizing music was at her core. Later, at the age of 30, regret entered. Instead of assimilating it, she began learning guitar, followed by writing songs, followed by joining the band Warm Nights. Releasing an album, the band performed throughout L.A. Then Izzy decided to do her “own thing,” recording her debut EP, Amazon, released last year.

Explaining Amazon, Izzy shares, ‘’Heartbreak, grief, impermanence, and fickleness, describes a lot of what I processed through writing ‘Amazon’ -in a dreamy, romantic sorta way.’’

“Throw Me Into The Pool” opens on a slowly strumming, gleaming guitar attended by a fat, rolling bassline and measured percussion. Izzy’s honeyed yet melancholic voice imbues the lyrics with lush tendrils of coloration, dripping with nostalgic savors. Drenched in lustrous crystalline hues, it’s a numinous voice under exquisite lilting control.

Dreamy and dripping with soft wistful emotions, the song floats on bewitching textures laced with alluring wisps of recollection. The gentle undulation of the harmonics mirrors the aura of the lyrics – graceful and shaded by loneliness.

Simultaneously ethereal and intimate, “Throw Me Into The Pool” is mesmerizing, imminent, and flavored by an overwhelming delicacy of passionate expression.