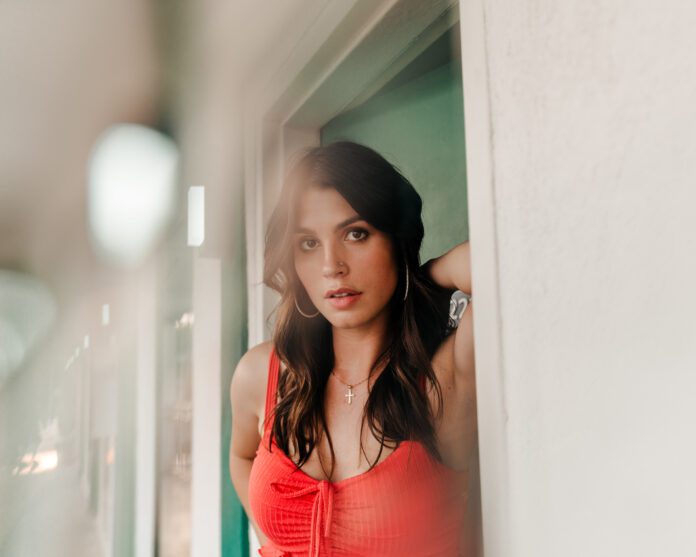 We at Guitar Girl Magazine are happy to exclusively premiere Americana darling Stefanie Joyce’s new EP Marlboro Reds and Motel Rooms. A sonic masterpiece filled with authenticity all wrapped up in a country-folk bow, the experience of a full listen to this project is one that cannot be replicated. One minute you’re headbanging, and the next you’re looking out the window in deep thought.

The first track “Presidio” has a gentle drum beat with some smooth electric guitar solos. It gives the EP more of a mellow feel than you’d first expect. The chorus lyrics “I still don’t trust myself when I’m alone” address a common reality for some of us listeners. It’s difficult to trust yourself and not always rely on someone else, especially when that someone else is someone you’re romantically involved with.

The third track, “Tulsa,” includes the EP title lyrics “Marlboro Reds and Motel Rooms.” However, the lyrics that truly stand out are “You can’t have something just because you want it, and I want it less a little more each day.” In life we can’t often have everything we want, unfortunately. It’s especially painful when that “something” we want is a “someone.” It’s like everything you do, even the most mundane things, are somehow related to this person and you can’t have them. A cruel punishment. Joyce really nails this awful feeling in this track.

The closing track, “Ticket To Atlanta” is a beautiful ballad that caps off the EP perfectly. Leaving someone after you’ve done something to hurt them is a hard feeling to put into words, but Joyce has lyrically captured that feeling. It ends the story of the EP on a sad, but realistic note. Not everything in life works out, especially when it comes to love, some people are just not meant to be together and that’s okay.

What are your biggest musical inspirations for this EP?

My roots are in folk and bluegrass music; I love how so many old folk songs look unflinchingly at the darker parts of life. You get stories of murder, heartbreak, drinking, cheating, all told with such honesty. That, and the acoustic, fiddle-driven nature of bluegrass and folk are a huge influence. My biggest influence however is probably the fact that I’ve spent the last 4 years as a working songwriter on music row. Nashville has a wonderful approach to the craft of songwriting; I’ve learned how to write in a way that is tight and cohesive. There is such an emphasis on storytelling, hook driven songs where every line counts. I love the technical craftsmanship of Nashville-style writing but I was getting burnt out by the subject matter of radio-friendly songs. I like to think that this EP is a melding of Nashville craftsmanship and rootsier subject matter and production. I also love the sound of Sturgill Simpson, Turnpike Troubadours, and Tyler Childers, and I think that comes through on the record.

We are Guitar Girl Magazine, do you have a favorite guitar to play?

My dad “lent” me his Martin D-35 when I moved to Nashville- I still haven’t given it back! I’ve written almost all my songs on it.

You studied a lot of literature, how has that knowledge spilled into your songwriting career?

Oh my gosh, where to start. My love of southern gothic literature (Flannery O’Connor, Faulkner, Cormac McCarthy, Eudora Welty) is what led me to Tennessee. Music came after. I studied creative writing in college and spent an undergraduate semester at the Iowa Writers Workshop; I thought I was going to write short stories for the rest of my life. But there is something very lonely about spending your twenties alone in a room, talking to imaginary people. I have a very quiet, introverted side but I also love collaboration. Songwriting and co writing was a way for me to write in a way that felt more public and performative.

Still, I am reading and studying literature constantly. I want to bring the same focus of language that you see in great literature to songwriting. For me songwriting is a literary art first and foremost, and I want songs to tell stories that point to universal truths; I don’t want to create entertainment. There’s nothing wrong with music as entertainment- most people just want to listen to something that helps them have a good time! But I know that I am strongest when I approach songwriting from a literary level. Evan Felkner of Turnpike Troubadours is a HUGE influence in this regard. His songs are as good as any short story.

Also, my new favorite southern writer is Crystal Wilkinson. I read her book “Birds of Opulence” this year and loved it.

What are three words you would use to describe the Stefanie Joyce brand?

‘Marlboro Reds and Motel Rooms’: what made you decide to name the EP this?

This was the working title for the song “Tulsa.” It is a line in the first verse. My wonderful producer (Kyle Manner) and I decided it was too long to be a song title but for me it just summed up the project so well.

What do you want listeners to take away emotionally from this project?

I want them to be able to feel their feelings! I think every song deals with a character that is stuck in some way. If you are someone struggling, these songs might not fix your problem but I hope they make you feel seen, understood, less alone.

I’ve been pleasantly surprised by Nashville in this regard; I haven’t really felt my gender to be an impediment in writing rooms. I’m blessed to have wonderful male co writers and mentors. Strangely enough I experienced way more sexism when I worked in film and literature in my very liberal hometown (Vancouver). Obviously, there are people in the industry that don’t take female songwriters seriously, but I think that the love of great songs in this town creates a more even playing field than that of other cities. However, I know my story isn’t representative of the experience of women in the music industry at large. I’m not blind to the fact that there is still a huge lack of representation of female/queer/bipoc perspectives, especially in country music, and I want to hear more songs that tell stories about what it’s like to be a woman in 2022.

What is next for Stefanie Joyce?

I plan on playing lots of live shows throughout the fall to support this project and hopefully doing a tour 2023. Any bookers or managers out there, hit me up! 😉 I’ve written a batch of new songs I’m really proud of and I’d love to go into the studio to work on a full album once I get funding. I’ve been collaborating with my brother, Harry Bartlett (a wonderful guitar player and composer- we share a love of bluegrass and old time music) on the sound of a full record and I want to dig even deeper into a grass-driven sound. I also plan to keep on writing for commercial artists. Mary-Heather Hickman, Kimberly Atwood, SJ MacDonald, and Zoe Cummins are all making waves in country music and I’m really excited to be a part of their upcoming projects. Chris Moreno is another up and coming mainstream artist I’m grateful to be working with – we have very different sounds but a ton of mutual respect. We’ve been writing together for 4 years – he’s good people.

Steeped in the tradition of country and folk music, with a distinctly contemporary, cinematic edge, Stefanie Joyce’s songs tell stories in images as much as sounds, weaving tightly crafted tales of sin, redemption, and everything in between.

Stefanie grew up in the Pacific Northwest and has loved storytelling for as long as she can remember. As a teenager, she told those stories through dance, training with Canada’s prestigious Alberta Ballet. As a young adult, she told those stories through film and literature, earning a degree in Film Production & Creative Writing at The University of British Columbia.

She also spent an undergraduate semester cutting her teeth on short stories at the Iowa Writers Workshop. It wasn’t until she finished college that her love of southern literature led her to Tennessee and she began writing songs. So, while she counts singer-songwriters such as Gillian Welch, John Prine, Brandy Clark and Evan Felker (Turnpike Troubadours) as major musical influences, her first love will always be authors; Flannery O’Connor, Cormac McCarthy, Annie Proulx.

Since moving to Nashville in 2017, Stefanie has garnered several cuts as a songwriter with  artists such as Mary-Heather Hickman, Gabe Lee, Zoe Cummins, and Ryan Lindsay. She has become a regular feature at Nashville’s premiere writer rounds, and has had the opportunity to play at major country music festivals such as the Lynchburg Music Festival. In 2020, her songs caught the attention of renowned publisher Woody Bomar (formerly of Sony/ATV) at Green Hills Music. Since then, she has been working with Bomar to further develop and market her song catalog.

In 2021, her Billboard-charting single “Treasure” (co written and performed by Mary-Heather Hickman) debuted on country radio and was featured on The Bobby Bones Show and iHeart Radio’s Next Women of Country.