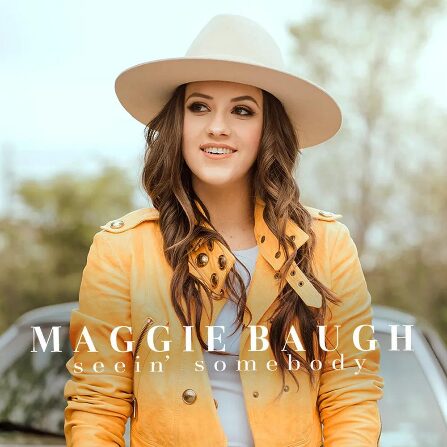 Boca Raton-born country singer-songwriter Maggie Baugh originally started her career as a classical musician. At six years old, Baugh fell in love with the violin, progressing quickly to the point of playing Carnegie Hall at just 11 years old. Around this time, though, Baugh found herself inserting bits and pieces of country into her classical pieces. This led to her taking up the guitar at the age of 12, changing the trajectory of her music career forever.

Since beginning her career in country music, Baugh has been on the road, played amphitheaters and festivals, and been lauded for her talent by the likes of CMT and PEOPLE magazine. Baugh recently released her up-tempo, feel-good single “Seein’ Somebody,” which she co-wrote with American Idol alum Lauren Mascitti (featured in our Spring edition). This year, she created the wildly popular “Finish the Lick” TikTok series that has garnered over 20 million views in just two months.

What is your definition of tone, and how has it changed over the years?
For me, tone is all about the way an instrument compliments the specific sound needed while playing a piece of music! My tone in music has changed over the years as my musicality and writing style has developed. Tone was one thing I had never considered while writing or playing, but as my writing progressed, I started realizing the need for great tone in instruments. I started understanding the dynamics in tone and how important it is for tone to match the music. You arent going to have a heavy tone on your guitar while singing a ballad! Unless, of course, that is the sound you are going for! I love being able to now have the knowledge to mess around with sounds until I get one I absolutely love with both my voice and instruments!

Which guitars, amps, and pedals are you currently using and why?
I am so excited to answer these questions because, man, I play a few …

Taylor 326e Baritone —This is probably one of my all-time favorite guitars I have ever played! It is a 326 Taylor Baritone, and it has the sweetest tone when plugged into any system! Whenever you put a pickup in an acoustic instrument, you always have the risk of changing the sound; of course, we have the ability now to dial it in, but it is still so hard to be able to get the 100 and true sound through an amp as it sounds in the room unplugged! BUT, my Taylor 326 sounds fantastic, if not better, plugged in! I have my baritone tuned in a B flat tuning! I use the DADEAD fingering but down two whole steps!

Taylor 816ce —This is my first 800 series I have ever gotten! I am a sucker for dark woods, and this guitar has a beautiful Indian rosewood on the back! Also, the matching pickguard on the front is a favorite of mine! I was never able to find a great guitar with a light wooded top until I found this one! The baritone and my 524ce Taylor are both dark wooded, both front and back, so it has that naturally well-rounded, beefy tone that some light-wooded guitars don’t naturally have! It wasn’t until I found the 816ce Taylor that I found the lighter top complimented the darker back!

Taylor GT 811e — I added this guitar into my collection because for a smaller scale guitar, this thing still plays as if it is the full thing! It belongs to the same series, family, and wood as the 816 I just told you about, but it is GT meaning a smaller scale guitar that is easy for traveling or smaller hands! I love being able to play this thing on the road while traveling; it is so easy to just pick up and go! But my favorite thing about it is if you closed your eyes and heard those two guitars, the 816 and the GT 811, next to each other, you would think it was the same guitar! Just because it is smaller doesn’t mean it doesn’t sound equally as good!

Fender Tone Master Deluxe Reverb — Usually, amps like this have tubes in the back that not only make the amp way heavier, but they require a lot of maintenance! The Fender Tone Master Deluxe Reverb not only is super light but has no tubes and is completely digital! The best part is the built-in cab simulator built in the back so you can bypass the speakers, plug an XLR in the back and send the line into any at-home studio recording rig!

What about strings?
I always use Elixir lights 11-12 gauge. I never do anything heavier (unless for a baritone where heavy strings are needed) on my acoustics or electrics! This is because I find it easier to not only play chords but also to bend and move around easier while playing solos! Practicing already kills your fingers; you might as well make it a little easier to play. 🙂

Are there certain recording techniques you prefer in the studio?
I don’t have any specific technique I prefer in the studio, but I do love spending time on a song and having it grow! I never end up using the first take of anything; this is because I love being able to spend a few days with it, hear what I did, come up with more creative ways to grow the song, and end up retracking until it is perfect! I do have a saying, though, “If it doesn’t feel right, I am not going to do it,” and this has truly made all the songs I have released that much better.

How do you keep your sound consistent onstage?
I love this question because the simple answer is you can’t…haha! The complicated answer is that you can try your hardest to keep everything exactly how you had it before, but nine times out of ten, it won’t ever be the same! Sound changes as bodies enter a room, sound changes when you are in an arena, and sound changes when you are in an amphitheater! Sound constantly changes as the environment changes both physically and temperature-wise. All you can do is educate yourself on how to best adapt with any given environment.

What does your practice consist of?
This varies! I am very goal-oriented, so I never just practice for the heck of it. I always have to have a goal I am trying to achieve! Whether it is a solo I have been trying to nail, or I have four new songs to learn, etc. Picking small goals to achieve makes practicing a lot more fun and a lot more fulfilling!

Favorite guitar riff or lick that inspired you to play guitar?
Well, of course, the fiddle player in me wants to say, “The Devil Went Down to Georgia,” but I didn’t start learning to play guitar because I heard a certain artist or riff that made me go “I wanna do that.” I started writing music as a way to escape and help cope with bullying! I was bullied in 7th grade to the point where it was either writing down how I felt or committing suicide. I know that seems like a very dark stretch, but it is true! The reason people feel trapped is because they don’t have a way of getting what is in their heads out into the universe. Either they can’t tell anyone because no one will listen, believe them, or even help. Sometimes we can’t get our feelings out because we don’t even know how we are feeling half the time. I am very blessed to have been able to turn to writing as an outlet to escape and cope with what I was going through at such a young age! And because you cant play violin and sing at the same time, I chose guitar as a way to turn my poems and words into songs.

What is your advice for young women who hope to work in the music industry?
I am such a believer in proving people wrong while doing what you love at the same time! I love being able to reach new goals and challenge myself. But at the end of the day, it is all about the music! The businesswoman advice I have — Don’t quit, prove them wrong, do it yourself, and work your butt off! But the musician side of me — It is all about the music, and never ever stop loving it.