Home Interviews Aliah Guerra: The App by a Musician for Musicians 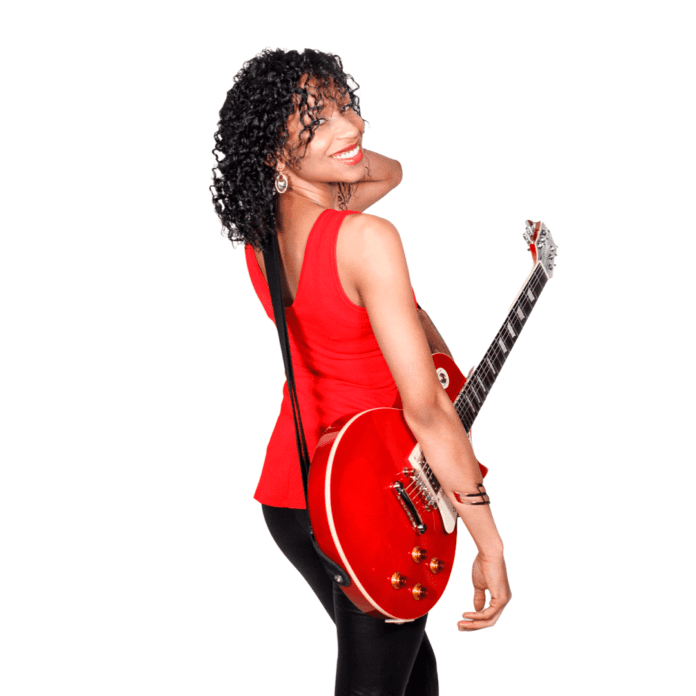 Aliah Guerra is on a mission to change the music industry one app at a time. This Canadian-based singer-songwriter, guitarist, and app developer has developed a way to connect musicians, producers, and industry professionals alike. The “Aliah Guerra” App was birthed out of the struggles that most independent artists face: maintaining artistic control in every avenue while pushing your music to the masses.

This well-rounded Trinidadian musician has always been versed in many areas of the music industry. She is an advocate of business education and uses her avenues to connect people of various backgrounds to the common love of music. With seven albums and singles on her musical resume and an app to provide resources to musicians around the world, Guerra has no intentions of stopping now. She is a member of the international Black female rock collective the TxLips Band and seeks to inspire girls and women of color everywhere to shine as bright as they possibly can as they follow their dreams.

Let’s start with the beginning of your legacy. Were you born and raised in Montreal, and did you always know you wanted to be a musician and app developer growing up?

So, I was born and raised in Montreal, Quebec, Canada, into an academic yet musical Trinidadian family. I had been speaking clearly from a young age and always wanted to be in show business. Originally, I wanted to act and model, but I had a lot of challenges living in Montreal due to me being a kid who was away from all the major English TV show auditions in Toronto and LA. Initially, I was discouraged, but as I got older, the downtime turned my attention to my studies, and then music became my escape—a “productive distraction,” as I like to call it.

So, you found your productive distraction in music. When did you finally pick up the guitar, and what really got you into playing?

Well, I started playing the guitar when I was about 12 years old. I started playing on my grandfather’s old classical guitar that my mom and her siblings were never allowed to touch growing up. My grandfather was a music teacher, and he used to jam with his band on the weekends after all of his lessons. After he passed away, I was old enough to inherit his instruments, and I began teaching myself simple songs like “A Horse With No Name” by the band America and “Leaving On A Jet Plane” by John Denver. Soon after, I fell in love with Amy Winehouse and jazz music. In awe of her talent, I taught myself how to play and sing several of her songs by ear. After studying her acoustic live performances with guitarist Femi Temowo, I realized I loved playing guitar, singing, and jazz. I started posting videos on YouTube, and my following started to grow around the world. I would later learn of Tori Kelly, who released her first EP, Handmade Songs, in 2012. It was then that I went from playing acoustic covers to writing my own songs and producing my first EP within the walls of my home. I was empowered by the artists that I had been listening to and wanted to take my artistry to the next level. Ultimately, it turned out that playing guitar was the golden ticket to achieving my dreams of getting into the music business, touring, movies, and more.

You recently released an app that is an excellent tool for musicians, no matter where they are in the world. Tell us a little bit about it and what gave you the idea to create this for the music industry.

After creating my first EP, I decided to take the independent artist route to approach getting my music out there. Most of this decision was based on wanting to maintain creative control while I was studying in school. I had to learn a lot on my own, and I kept finding myself saying, “If only I knew this before.” As much as art is a business, business is also an art. I believe that when artists have direct access to the resources needed, it makes it more possible to take care of your business. It was emotionally draining and overwhelming at times. There is no blueprint for this, and there is a lot of “do it yourself” inside of the industry, so I wanted to create a platform that would grant immediate access to creative networks, contacts, tips, and hacks that I’ve learned over the years in the hopes of helping others out there.

How did you learn about building apps and programming?

One thing about me is that if I don’t know how to do something, my determination will push me to figure it out. I canceled all of my European shows at the beginning of the pandemic, and it kind of discouraged me because I felt like I was not able to engage with my fans the way I aimed to. Additionally, social media algorithms constantly changing have made it very difficult for independent artists and small businesses to reach their audience.

Most of my learning process was trial and error. I found a lot of ideas on YouTube that helped me to craft how I wanted my app to look, so I would get up on Sunday mornings at 8 a.m. to attend various workshops and live events to learn more. Because technology is advancing and always changing, I often spent 16 hours a day learning, developing, changing, etc. It took a lot of time, but it all worked out in the end.

Let’s talk about the tech side of the music industry. What, if anything, do you think this side of the industry is missing when it comes to apps and development?

There isn’t enough emphasis on the fact that artists can also be creative entrepreneurs. As artists, we tend to find creative avenues in order to have multiple streams of income. We are constantly looking for ways to fund our art, and I believe being a “starving artist” should be the last resort if at all possible. The technology is out there, but often it seems so out of reach to artists who aren’t signed to major record labels with those resources.

When creatives take ownership of their brand and business (especially in the tech industry), it allows them the freedom to find ways to create immediate digital access for fans to directly support what is going on no matter where they are in the world.

How do you balance music and developing apps?

Well, music is my life, and everything else is an extension of that. Much of my day-to-day activities revolve around doing something to support my goals. While my business demands a lot from me, I am thankful that music also requires me to stay healthy in my mind, body, and spirit. I find these avenues help increase my creative productivity, so I make sure I stay on top of my organization, planning, emails, booking, marketing, etc.

What are a few qualities that you believe all artists must have as they enter into the industry?

I believe having and sticking to your standards are important. Don’t be afraid to be ambitious, resourceful, confident, patient, hard-working, coachable, and willing to always get up and try again. Professionalism is key, but don’t forget to have fun!

All of these things are necessary, but balance is the key.

What is your go-to home studio setup?

I am currently using my Mixcraft 9 Behringer UMC204HD 2×4 USB 2.0 Audio/MIDI Interface, a Neewer-700 condenser mic, my Jay Turser JT-D200 electric guitar, and my Alesis MPC MIDI keyboard. I’ve been using this setup for roughly 10 years and have made light upgrades over the years. I made my first EP with this equipment, so this goes to show that you can make it happen with a few good tools!

What is one piece of advice you would give to others seeking to follow in your footsteps?

I would say the best investment to make is in yourself. You have so much value inside of you just waiting to be tapped into. When you consistently dedicate time to self-discovery and improving your life, mind, and health, achieving your goals and dreams becomes a bit easier. This journey will be lonely, and it may seem overwhelming at first, but it is all worth it in the end. You might even surprise yourself and realize that you are capable of more than you think. Try not to get distracted by trends on social media. Remember to always be you and invest in yourself! The rest will follow.