Ariel Bellvalaire is a top-notch, pop-rock guitarist, singer, and songwriter. After touring the world in cover bands like the Michael Jackson tribute “I am King” and the Guns N’ Roses tribute “Paradise Kitty,” she is busting out with her own brand of catchy hard rock music. She recently released her debut single “Elastic” and an exciting video to go with it.

We caught up with Ariel about her new release and what she has on the horizon.

Can you give us a brief rundown on the Ariel Bellvalaire “origin” story? What made you decide to pick up the guitar and start performing?

When I was a young girl in gymnastics class, they always had popular songs playing on the radio. Avril Lavigne came on while I was on the balance beam, and the song “Complicated” caught my attention. Something about that song told me I was meant to be a musician. I became obsessed with Avril and decided I wanted to be a singer just like her, so my parents enrolled me in voice lessons at a local studio (Summit Studios in Manchester, Connecticut), and they had a program called “Rock Band Jam” that put students together and coached them as a band. I became the singer of the band and played my first show at a pub that summer. The second I hit the stage, it was OVER! I couldn’t get enough of performing, and shortly after, I started playing basic guitar in the band as well. One day I heard “Crazy Train” by Ozzy Osbourne and was completely blown away! I wanted to play like THAT! I started learning some rock songs and solos and was really excited to start playing them with my band. When we had our first show performing these songs, I just learned the songs and didn’t think much of it. When I played the guitar solos live for the first time, though, the audience went wild over the fact that a little girl was playing these solos, and it was in that moment that I realized playing lead guitar wasn’t as common for women. I loved it and was determined to keep going!

What made you gravitate to the pop hard rock music you play?

Being that Avril Lavigne was my first musical inspiration, I was always drawn to the commercial edgy pop sound and began writing my own songs that had an edge to them as well. When I got deeper into rock music, I would write heavier music but still loved the pop vocal melodies and found my place in the pop-rock world. I will always add guitar solos to my pop songs, though! 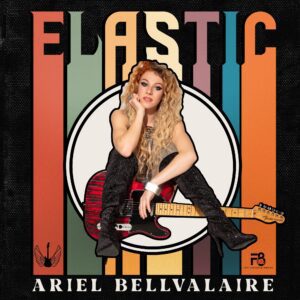 Your video for “Elastic” is a lot of fun. I love scenes like the ones of the voodoo doll and you in the hospital bed. How did you come up with the concept?

The “Elastic” music video was one of the most fun things I’ve ever done, actually! Our goal was to really showcase my love of guitar, even though the song itself was about a rocky relationship. The music video director and I brainstormed back and forth on different scenes involving a guitar and wanted to also give nods to some of the music legends that inspired me. One of those instances was the hospital bed scene, which was a tribute to Stevie Ray Vaughan. We knew we wanted to sit up in a hospital bed but had to think of ways to end up in the hospital to make the scene work. After a few rounds back and forth, the director thought of a voodoo doll, which was funny and fit perfectly. Of course, it had to have a guitar and curly hair as well! The video was such an incredible collaboration of back and forth guitar-centered ideas.

I have to talk about the scene in your video where you play guitar while swinging upside down on an aerial hoop. Is that something we can expect to see in live shows? How do you integrate your gymnastic training into your performances?

You can absolutely expect to see me upside down with a guitar live! Funny story about that, actually. I was always a gymnast growing up and loved it! My first crazy stage trick was doing a split while soloing, and the audience always loved it. When I moved to Los Angeles, I tried a circus workout class, and they had aerial equipment. After my first class, I was completely obsessed, and it brought me back to my competitive gymnast days! My next thoughts were, “how can I incorporate my guitar into this?!” I had a special guitar strap called the “Slinger” strap that went around my waist and clipped the guitar in place. I was thrilled when I was actually able to play upside down and began posting pictures and short videos of aerial guitar. Shortly after, I was scouted by ABC’s The Gong Show and put together an act combining gymnastics, aerial, and guitar soloing to perform on the show. My act “Shrednastics” was born, and I’m so excited to add it to my live shows. The training involves quite a bit of stretching before getting in the hoop and experimenting with different tricks and poses that are hands-free. Once I’m comfortable with the trick, I’ll add the guitar. It’s quite the workout for sure and certainly takes a toll on your body!

What does it mean to you to be a woman in the music industry?

Being a woman in the music industry to me means that I will always have to work harder to get where I want to be. There’s always the “that was pretty good for a girl” mentality that you’re constantly hearing, and it has always fueled me to get even better at my craft. I’ve been criticized plenty of times just for being a female guitarist before I’ve even played a note! If you love something enough, though, you can work through anything and break through barriers. For me, the time on stage outshines everything and reminds me why I wanted to be in the music industry in the first place. On the flip side, there are often many gigs available that specifically require female musicians, and those gigs have been some of my favorites. I have had the opportunity to tour with multiple female bands, and they were some of the most talented musicians I’ve met and were such a pleasure to work with. We were all in it for the love of making music!

You’re a truly excellent guitar player. What tips would you give to musicians who are just learning to play?

Ahh! Thank you so much, that really means a lot! The biggest piece of advice I can give is to just keep going. Never give up! Always remember what drew you to the guitar in the first place and let that fuel you to stick with it. It’s definitely not an easy job by any means, but when you hit the stage or find a place in the music industry you’re passionate about, you’ll be really glad you did. Another big thing is to constantly put yourself out there. It’s rare these days to be “discovered.” Most gigs and opportunities you’ll get are from performances, posting videos of your playing on social media, and trying to get yourself seen as much as possible. There’s always this fear of not being good enough, but don’t let that keep you from showing off exactly where you are. Even when you get to the next level, nothing will ever be perfect, but you can create more potential opportunities for yourself by getting out there anyway!

I understand you’re from a small town in Connecticut but have gone on to travel the world. When it comes to songwriting, do you feel more inspired by your small-town roots? Or your big city travels?

For songwriting, I found all the traveling to bring the most creativity. The experiences I’ve had on the road really shaped me as an artist and have sparked musical ideas I never would’ve had at home. I actually find the most inspiration while I’m alone in a hotel room or even on an airplane and often hear music and lyrics in my head before I sit down to write.

Your music has a strong classic rock and classic metal influence. How important do you think it is to keep rock ‘n’ roll alive and to hand it down to future generations?

ROCK AND ROLL WILL NEVER DIE!!! I’m a firm believer that true talent and real instruments will always live on even when the music world is dominated by programming and electronic sounds. There is something truly magical about the era of rock and the raw talent that these rock legends had. I truly think that seeing them perform on stage will continue to inspire future generations. Even for big pop artists today, their live shows often include many rock elements as well as live performers to make the show even bigger. The audiences always go crazy when they hear the rock guitar, no matter what. It’s so important to keep this element alive and show the world how incredible dedication to an instrument is!

You just came out with a great single and video. What else can fans expect from you in the coming year?

I’m so excited for 2021, as this will be a big year for my original music. I have an album of all original songs in the pop-rock vein that really showcase my love of rock guitar and pop vocal melodies. I plan to create more music videos just as wild and crazy as “Elastic” and continue to push the boundaries of stage tricks and performance. My hope is that I’ll be able to travel and tour once again and connect with fans at shows, but until then, expect many performance videos, live stream shows, and of course, guitar solos with over the top stage tricks!