Blue rock singer, songwriter, and guitarist based in Nashville, Lauren Anderson, recently released her latest album, Burn It All Down, on September 9th.

With the exception of one song, Burn It All Down was written entirely by Anderson. She co-wrote the single “Hit The Spot” with John Salaway and Adam McDonough. She produced the album with the assistance of Taylor Lonardo (who also mixed, mastered and engineered), as well as the musicians who contributed their talents: drummer Matt Doctor, bassist Hutch, guitarist Dan Wecht, keyboardist Johnathan Smith, trombonist Will Elliot, and saxophonist and flautist Joe Douglas. The album also features special guest guitarist Albert Castiglia.

A former music therapist, Anderson left her day job to move to Nashville to pursue her dream of making music. She is both dedicated and determined to express herself in ways that can resonate with fans.

As a blues rocker, who were the influences that first drew you to the blues genre?

One of my first CDs owned was The Pointer Sisters, ha-ha. They are very eclectic with their influences and style, which I can definitely relate to! Then I quickly became enamored with any big-voiced female singer out there. From Whitney Houston to Christina Aguilera!

Growing up in Chicago, how did the town influence the music you are writing and recording today?

I was definitely around a lot of music. My family was musical and encouraged me a lot. There were lots of opportunities to sing in my hometown, and so I grew up singing in every choir I could find. Those early choir days taught me so much, and I’m so thankful for them.

You trained classically on piano at the age of eight and eventually attended Augustana College with an emphasis on voice with the plan of becoming an opera singer; why the change to blues and rock?

I had a moment during my freshman year where I was with other opera majors and realized that it wasn’t for me. It felt like an out-of-body experience and was followed by immediate panic because I didn’t know what else to do. I always knew my heart was split between opera and blues/rock, but I had no idea how to pivot just yet. So I finished my education and slowly set out on my own path.

You have a master’s degree in music therapy from the University of Kansas. Can you tell us more about your experience as a music therapist and what made you leave that career to pursue music?

I was always interested in psychology, so when I came across music therapy, I was immediately interested. I wasn’t yet ready to pursue my career as a performer, so I got my master’s and worked as a therapist in a Pediatric Unit for years while getting my music career started. I still have my credentials as a music therapist but am taking a break from practicing it so I can put more focus on my music career. I really enjoy advocating for the profession right now since it’s still largely unheard of.

When did you begin playing guitar, and what drew you to the instrument?

I stubbornly first learned the mandolin, ha-ha — only because “everyone plays the guitar” — but quickly switched over. I didn’t start learning until my last year of college and started with classical guitar. But then, when I started grad school, I had to start learning a bit of everything and found a love for accompanying myself on guitar when I sang. It’s just grown from there since then. 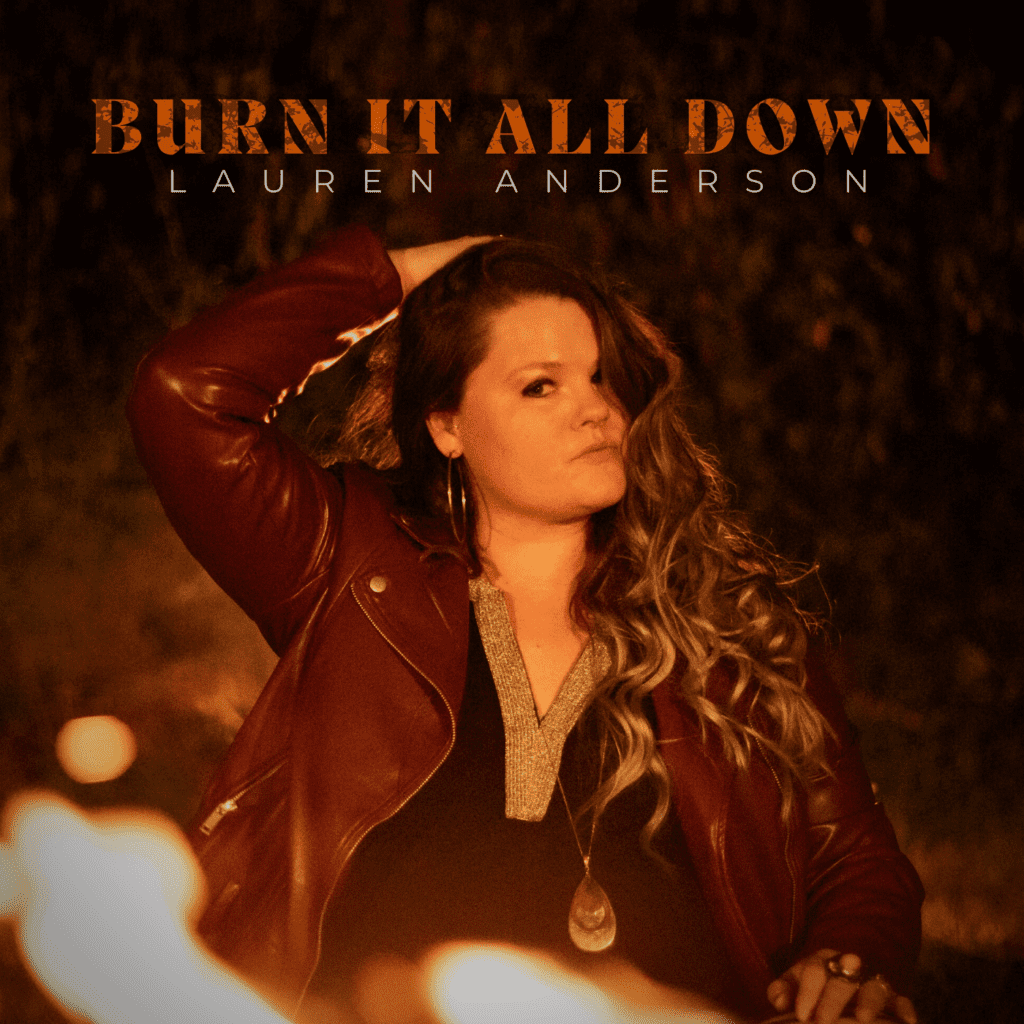 Let’s talk about your new album, Burn It All Down. Can you share with us the backstory and how you laid out the track listing?

The title track is a fictitious song behind why Chris Stapleton is stuck in jail for 40 days in his song, “Midnight Train to Memphis.” It’s such a bold statement to make, too, although I’m not at all advocating for anyone to actually “burn it all down.” Once I had my title track, I pulled other songs that I had written that felt like they went well with it.

Working with Taylor Lonardo on co-producing Burn It All Down, was this your first time working with Lonardo? Tell us how the two of you collaborated on this project.

Taylor was actually my engineer, and he mixed and mastered it as well. I like to say that producing the album is a group project, though. Although it is my album and project, the guys I work with have great ideas, and it wouldn’t sound the way it does without all of them! This was the third project I’ve recorded with Taylor too, so I really love the way he works and the product we get.

Albert Castiglia and John Salaway make appearances on the album. What do they bring to the table?

Albert is such an incredible guitar player and friend. I also have the pleasure of working with his wife, Michelle, on radio promotion, so I love the Castiglia’s! He’s on “Zombie Blues,” and when I wrote that song, I immediately knew his high energy, fun guitar playing was perfect for it. I was so happy he had time to lay down a part for us!

I co-wrote “Hit the Spot” with John Salaway and Adam McDonough, and John was the one who came up with the guitar riff, so I knew I wanted him on the track! Those two are incredible musicians and writers, so it was a lot of fun working on that tune with them.

Where was the album recorded, and what was the recording process?

It was recorded at Taylor Lonardo’s home studio. I wrote a whole bunch of songs, narrowed them down, and sent acoustic recordings and charts to my guys. Then we rehearsed all of them and talked through different ideas we could bring to them. Then knocked them out in the studio! Once we tracked everything, we were able to listen to them and decide on the little details, like harmonies or other instruments to add to the tunes. And then we have an album!

Is there a song or lyric from the album that really speaks to you?

There’s a couple of lines I’m pretty proud of, ha-ha. Being a songwriter in Nashville, it definitely keeps me on my feet trying to keep up. There are so many incredible writers here, so lyrics are something I’m constantly trying to improve. One that I was pretty proud of is in the second verse of “Burn It All Down,” where the main character is describing the terrible work conditions of this dive bar she works at, and the line goes, “Nobody’s gonna miss this place. That’s what I said when I pulled out the mace and sprayed old, handsy Joe in his one good eye.” Ha-ha. Another one is in the chorus of “Lose my Head.” The line is, “I ain’t sleepy hollow boo, but I will lose my head.” It doesn’t mean anything, and it’s just a fun play on words, referencing the headless horseman from the old story of Sleepy Hollow. I also shared a lot of truth in the song “I Know,” which is a love song to my future, unknown husband.

What is your songwriting process, and where do you find your inspiration?

I find inspiration sometimes randomly. A line from a TV show or a melody will just pop into my head. I record everything so that I have something to go back to when I have time to sit down and write. I like to pull from personal stories and experiences, but in this album especially, I wrote a lot of songs about other people’s stories as well. For example, the song “Soul is Mine” is roughly about the Robert Johnson story where he went down to the crossroads and sold his soul to the devil for his guitar playing skills.

What do you hope fans take away with them when they listen to your music?

I want fans to find a piece of themselves in my music. I try to write details that, hopefully, everyone can relate to. I think music is therapy to most people, and that’s what guides most of my writing. I want my music to hit people with an emotion they didn’t realize they needed to let out and to also have a good time.

What is your go-to guitar for songwriting?

The one and only acoustic guitar I’ve ever owned was the one my Dad gave to me in college. I think he said he bought it for like $50 or something, and it’s a Fender. It’s a good solid guitar, though, and is still holding up!

Do you have any guitars or additional equipment on your wish list?

I’d love to get an acoustic Taylor. I think the 414’s and up have a pick-up in them that just makes any rhythm on the Guitar pop. I’d love to get another electric someday soon too. Right now, I have a semi-hollow body Ibanez which I love. Not sure what my next electric will be yet.

Who are some of your favorite artists that you are listening to today?

I really love Larkin Poe. Grace Potter has always been a favorite of mine too. But my playlists on Spotify are always all over the place. Right now, I have one that has Kelly Clarkson, Patty Griffin, Rival Sons, Lizzo, Lawrence and Ellie Holcomb, ha-ha. There’s too much great music out there to stick to one genre!

Have you faced any challenges in your career, and if so, how did you overcome them?

Touring has been a struggle and is for many up-and-coming artists. Especially touring out of Nashville. There’s always a better gig to take, and lots of players play two to three gigs a day downtown and can make a lot better money and sleep in their own bed at night versus being on the road. As a DIY artist, it’s sometimes a struggle managing all the hats we have to wear too. But I’d pick this job over any other, even on my worst days.

Young women in music today are always looking for inspiration and advice. What would be your advice to aspiring young musicians today?

No one is going to create the career you want other than you. You have to put in the work, find a good support system, and, no matter what, don’t give up. Success is on the other side of the struggle.

What’s in store for the future of your musical career?

Right now releasing and touring in support of this album. Maybe another holiday song, but I’m not sure yet. I already have more songs I’d like to release, too, but that may just be as singles next year. Hopefully, adding more to my team moving forward as well!

Do you plan on touring in support of the new album?

And lastly, here is an open-ended question – music to me means . . .

Connection. In grad school, we debated why music has been around for so long. It’s in our oldest documentation of history, and yet it doesn’t clothe us, feed us, pay our bills, etc. But music connects us, and what is life without connections?