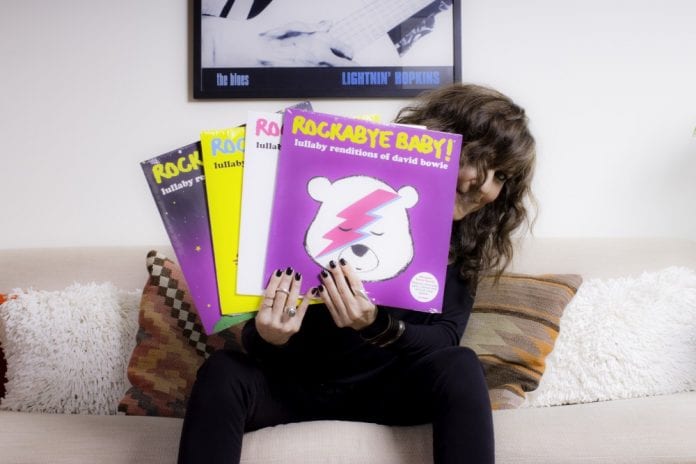 Who is the brainchild behind Rockabye Baby’s idea to turn iconic rock tunes into lullabies? None other than the sister of rocker David Lee Roch. Lisa Roth witnessed firsthand the tireless touring schedule and life of a rockstar and had decided to stay away from the music industry. She sought a career in the health industry as a nutritionist fueled by the desire to help people live healthier lives after watching her mother suffer from a traumatic brain injury when she was a child.

During her tenure in the health industry, she worked as a health and nutrition segment producer for Discovery, which ultimately led to an opportunity to work with CMH Label Group in a development role. In 2006, after a disappointing experience shopping for a shower gift, the idea for crafting iconic music of rock, pop, and hip top artists into delightful, lovely lullabies was born.

Working with the label, she was allowed to proceed with three albums. Since that time, Rockabye Baby has grown tremendously, and Roth expanded the lullabies to include Latin, Broadway, and other genres. With over 100 albums in their catalog, Rockaby Baby has seen tremendous attention with a song featured in a Super Bowl ad, over a billion streams, and numerous celebrity endorsements.

Roth filled us in on Rockabye Baby, her background, and more.

As the founder of Rockabye Baby, how did you come up with this concept of turning rock and roll songs into lullabies?

Necessity was the mother of our little invention. I was shopping for a baby shower gift for a friend during my first week at CMH Label Group, an independent record label in Los Angeles. I thought it would be easy to find a music gift that I’d be excited to give, but that wasn’t the case.

I went to work the next day and told the owner of the label that we need to get into the baby business and create a music series that’s as much for the parent as it is the baby, something with a bit of irony, a bit of humor, and a little nostalgia.

I was thinking something like Baby’s First Sex Pistols. My co-worker at the time, Valerie Aiello, came up with the concept Lullaby Renditions of Metallica. After a year of creative meetings and production, we released our first three albums, Lullaby Renditions of Metallica, Coldplay, and Radiohead. Fourteen years later, we’ve released over 100 albums and have over one billion streams.

What was your mission at the outset?

There were several goals. We wanted to create a music series that appealed to adults and could be shared with their little ones—something ironic and humorous, with a little wink of the eye. We also wanted to produce a baby product that creates a bridge between who the parent was pre-baby and who they’re becoming in this new role. Something familiar, comforting, and nostalgic.

And to provide relaxing music for everyone, especially during stressful times like now.

The brand started as a rock series, but now we also cover pop, hip hop, Latin, and country artists. After all, every genre has its rock stars.

How did you make the transition from a nutritionist to a business owner of Rockabye Baby?

After twenty years as a nutritionist, I was just ready for something new, and I was raised to think that it’s good to change horses in the middle of the stream. You don’t have to do just one thing well.

I had always loved documentaries, so I got a job as a segment producer for documentary-style television for Discovery and National Geographic. As has often been the case, I talked my way into a position for which I had no qualifications, and then it was trial by fire.

After five years of that, I was invited to do a series of nutrition lectures for the staff at CMH Label Group and somehow convinced them to hire me. I had no job title, and again, no idea what I was doing, but figured it would be another adventure.

Did you face any challenges along the road, and if so, how did you overcome them?

Everything was a challenge at the label because once more, I had no apparent experience. Trial by fire all over again. But the first week I was there, what I did know was that we should get into the baby business, and Rockabye Baby was born.

I always share that one of my favorite possessions is on the wall in my office at work. It’s a sticky note that says, “You have no discernable skills to work here.” When I started at CMH Label group fifteen years ago, the office manager at the time said that to me. I wrote it down on that sticky and have kept it ever since. It’s been suggested that I throw it away because it sounds negative, but for me, it’s a badge of honor and my life story.

Having a famous brother in the music industry, you strayed away from music as a career. What was behind that decision?

Simple, I can’t carry a tune to save my life. I spent a lot of time as a kid singing Smokey Robinson songs into a hairbrush, but that was the extent of my vocal prowess.

I took piano and guitar lessons as a kid, so I can read music, but it just wasn’t my jam. And in high school, we had a very hot looking drum corp, so when I learned that the brass instruments got to march next to the hot drummers, I took a crash course in trumpet playing. To this day, I can play a mean rendition of Isaac Hayes’ Shaft, but that’s my entire repertoire.

I expressed my musicality through dance my whole life—ballet, jazz, and so on. I still love it more than anything.

I think to accomplish what my brother accomplished in the music industry requires that you have more than a desire; it has to be a relentless, indefatigable obsession.

The Rockabye Baby catalog is quite extensive and covers many genres. What has been one of the most unique projects turned lullaby?

They’re all unique. Translating songs into lullabies is a little bit of an art form, but after fourteen years, we pretty much have something up our sleeve for every challenge that presents itself. For example, translating Black Sabbath, who use a lot of minor chords in their recordings, is no easy task, given that our palette of instruments is quite organic. As you can imagine, producing a lullaby version of Iron Man using woodblocks and bells was a unique experience, to say the least.

Also, a number of hip hop songs are a challenge. Our recordings are instrumental only, so we have to create a musical element that doesn’t exist in the originals to replace where the vocal rap would be. Something recognizable, something musical that retains the attitude and intention of the original rap. Definitely a creative challenge.

What’s one piece of advice you would offer someone wishing to start their own business?

Lend your individual perspective to whatever you do, that’s what will bring originality and will attract like-minded people. Authenticity is what touches people, not what you “think” will touch people. Trying to be something you’re not or to sustain a business that isn’t honestly reflective of you is exhausting and a terrible business and life strategy.

I’d also like to share that there have many times in my life when I didn’t have the energy or spirit to do much more than just show up and put one foot in front of the other. But in retrospect, I see that even the tiniest baby steps created forward motion. I may not have been able to make or achieve big picture goals, but I showed up and moved in real-time from experience to experience, creating opportunity after opportunity.

Bottom line, if you simply show up, you create the space for interesting things to happen.

We release about six to eight new albums a year, and there are some really good ones coming up. I don’t want to ruin the surprise element, but there’s a nice cross-section of rock, pop, country, and hip hop artists, and in February, a very special release that we’re all excited about. How’s that for a tease?