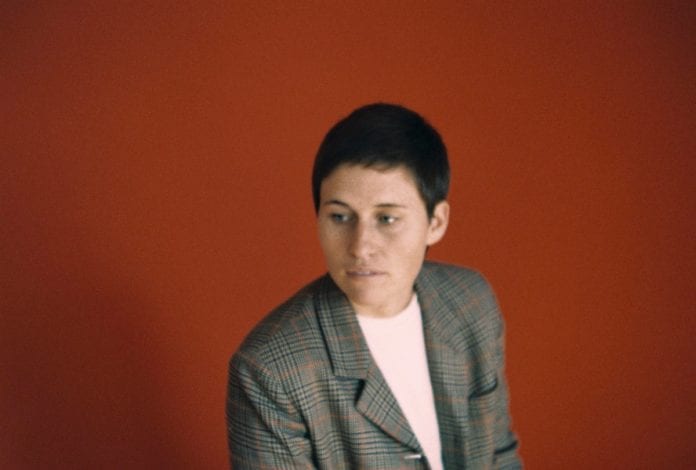 Although Mimi’s songs are gorgeously constructed, it’s her voice, complex and allusive, that mesmerizes, seducing listeners with raw imminent savors, at once fragile and melancholic, potent and susceptible, yet irresistibly hypnotic.

Born and raised in California, Mimi began busking when she was 15-years-old, eventually touring and performing around the world, both as a solo artist and with her band, sharing the stage with Julia Jacklin, Angie McMahon, Lydia Cole, and Nadia Reid, among others.

“Dark Storm” projects moods in artful sequence, exuding a myth-like structure akin to wahnsinnige Sehsucht – intense longing for the eye of the storm and respite.

Guitar Girl Magazine’s interview with Mimi Gilbert covers a variety of topics, from the inspiration for “Dark Storm” to her definition of tone, and her songwriting process.

My little pocket-knife, my passport, and a small guitar.

This was a song that really just came in one go. There’s no poetry about it, I was feeling overwhelmed. I could hardly afford rent that month and I had some health issues flaring back up that I didn’t know how to get help for. The state of the world felt like a dark storm brewing.

So I started writing this simple thing, and by the end of it, I realized that everything I needed to find peace and contentment in this exact moment – which is all I can control – was right here in that exact moment. I was going to be okay.

You have a new album, Grew Inside the Water, releasing October 23 via Cohort. What can you share about the LP?

This album, in many ways, will be a first for me. It was the first time I was able to record some of the more full-sound arrangement ideas I’ve had in my head for a while. The first time I’ll be releasing a record through a lovely label I’ve joined up with.

Having lived out of a suitcase or a sublet so much of the last 10 years in the USA and different countries, I learned a lot about myself, my culture, identity, and my country by learning about other people and other beautiful parts of the world. This kind of perspective led me to tear apart and rebuild some beliefs I once held. My continual coming out of the closet as a queer person has also led to so much of this needed shedding of so much internalized shame I carried through my life. The stories in these songs are about tearing down and rebuilding. The pain and loss, discovery, and freedom of growing and evolving. The process of growing and letting go of shame, in general, is a story any human alive could relate to, and I really hope it finds a home with you out there.

This is my debut studio album and I’m very proud of the whole team that helped tie it together. I can’t wait to share it.

Typically, they come at a similar time. I will find a short melody, or maybe even just a mood or general concept I want to try and capture, and then I work lyrics into a melody right away. The sound of single words are their own melodies, with their own percussion and flow and so I really enjoy writing both at the same time if I can, verse by verse.

I’ve always hoped that my songs could simply create a space for people to be themselves within, space for people to feel seen by. I hope that people will find their own story within the songs somehow and feel comforted, validated, or encouraged. My pain and joys, hopes and dreams are not much different than yours when we really boil them down.

An American Mahogany Strat HHS, a Gretsch electromotic baritone, a jumbo Martin (much too large for my small short body), an old Kay 1960’s archtop, and my travel guitar I am not as precious about is my mahogany Taylor GS mini.

At this point in time, it would be a 000-28 body old 70’s Martin. I played one at my favorite guitar shop in Seattle, ‘Dustry Strings’ once. It was on concession for $3,000 – a spruce top Martin. I was in love. I was also broke. That kind of old body and tone is my dream, regardless of the manufacturer.

I typically get most of my practice these days by playing in other people’s bands or by learning their songs, be it guitar or bass. I find that learning other people’s songs is what challenges me most and what leads me out of stale habits.

First a foremost, like so many people in the world and especially in America, I got my start playing music in church as a shy little kid. That’s where I learned how to play the guitar and bass. Back then, I thought I couldn’t sing for shit. It wasn’t until years later I learned that I simply just don’t have a voice meant for singing ballads that belt across the octaves, haha.

I really got my start in writing music through street performing. That’s when I started singing and making my own songs and melodies. I started street performing at 15 in Ventura and Santa Barbara, CA. My brother and I would live out of his truck for weeks on end in the summer and travel from LA, through San Francisco, over to Reno, up to Seattle street performing in each city and town along the way. This is when I first learned the power of music in any and every space, for any age, any culture, etc. Meeting other street performers and hitchhikers, learning new tricks and music tips from them, those were some of the best years of my life thus far! I made a living this way for 7-years in America, Australia and New Zealand. It really shaped me as a person.

I grew up raised by a theatre nerd (my mom), and I truly think this has been one of my biggest inspirations. It hasn’t influenced my type of genre necessarily, but it has inspired my desire to really capture emotion in songs.

After that, in my teen years, I listened to a lot of Regina Spektor, Laura Marling, and Ray Lamontagne. Regina Spektor’s ability to share all her quirks in her music so beautifully has inspired me to try and always be myself. While the songs of Ray Lamontagne really have taught me the heart-ripping power of a strong and solid melody.

Tone to me is just the feeling I get when listening to a certain sound. If the tone of a guitar or a bass thud is something I can picture in my mind as a tangibly enjoyable sensation, like rubbing my finger against rough concrete or silk, this is a good sign that I’m liking the tone.

It has changed a lot over the years mostly because I have started to care more and really learn what I like. Playing bass in friends’ bands has also helped me pay closer attention to the tone of old compressions packed basses, and the tone of snares and kicks. Lately, and in this new album coming, I have been quite obsessed with old dead guitar tones. I’ve been learning tricks to deaden my guitar strings quickly to achieve this using oil and salt.

I am certainly not ashamed, but every now and again I will blast the amazing musical theatre soundtracks and just sing at the top of my lungs. “On my own’ or “I Dreamed a Dream” from the Les Miserables soundtrack just kills me every time. Sometimes I just blast Avril Lavigne in the car.

Surround yourself by bandmates and music collaborators that make you feel good, that make you feel smart and challenged in a good way. Make sure to fill your feed with and watch content that is led by other strong female or queer mentors as well as men. Follow accounts like this one and ‘She Shreds’ on social media for encouragement. Of course, always trust your gut and don’t listen to people that patronize you. Always be open to advice, but don’t let it be unsolicited. Ask yourself if you know what you’re doing and why (you likely know) before going to make decisions about your music based on outside opinions.

I really just have to; It’s my way of processing this life, processing the world around me. Often times, making music can be hard and feel like a weight, but there are those moments where it feels like a wave of spirit, love, and passion flowing through and over me. I keep coming back because of that. Music is the first thing that will make me weep after a year of not being able to cry. I need it like I might need any kind of medicine.

Well, I’m of course excited to release my full album at the end of this month, and it’s a dream come true to have the songs pressed onto physical vinyl – a first for me.

The world awaits and heals from COVID, so it’s not easy to plan for much except the day. But when we next safely can, I cannot wait to tour across the states with my beautiful band, playing shows and meeting more wonderful people along the way.