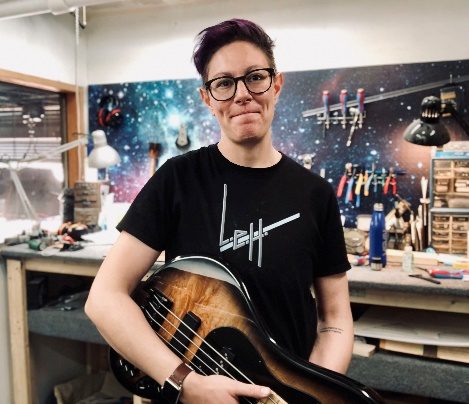 Located in the Redhook neighborhood of Brooklyn, L. Ellis Hahn transforms planks of wood into beautiful, high-quality instruments. Specializing in the offset design, Hahn states on her website the idea behind her creative designs:

“The Offset was born out of an idea to evolve one of my favorite shapes into a professional music machine. I had a sketch of this bass under my bench for several years. Then one day, I was challenged to make it a reality. Rather than translate a drawing into an instrument, and assume everything would be fine, I roughly drew the existing design onto a plank of wood and kept carving until it felt right and was well balanced. Then I contoured it until it felt completely natural under the hands.”

How did you get started as a luthier?
It all started around 2001 when I broke my guitar and had a bad experience at a repair shop. I walked away from it thinking that I could do a better job myself. So I bought a book, found an apprenticeship, got my hands dirty, and have been obsessed ever since.

How long have you been building your own line of guitars and basses?
I dabbled for a long time before I was able to really engage with the process. I attempted to build my first guitar about a year into my first apprenticeship around 2003. But it wasn’t until 2010 that I started seriously building under my own name. In the time between, I spent thousands of hours honing my skills working in all levels of the production process at one of the top guitar shops in NYC: Sadowsky Guitars. That gave me some time and experience to find out what works and why, talk to players about their needs, and prototype a lot of different designs. I needed that time to let my ideas gain some natural momentum.

What drew you to this line of work?
A love of music, first and foremost. But what I love about this line of work now is how it brings together the different mediums of design, art, ergonomics, electronics, math, production processes, and the wildcard of working in the organic medium that is wood.

How do you choose the woods you work with?
For my core building, I like to stick with some of the more traditional woods used for guitars like alder, ash, maple, and mahogany—but I like to play around with different combinations.

For instance, a very classic body wood to pair with a maple neck is swamp ash. However, I prefer to pair it with alder because it adds to the characters of maple versus having similar characteristics to maple.

It’s kind of like learning a scale when you are playing a musical instrument: once you’ve internalized it, you can experiment with it and come up with lots of new and different combinations.

What about the electronics?
The design behind the electronics on my instruments is a combination of tone and tactile. I use a Nordstrand 3-band preamp that I have modified to be “boost only.” The thought there is that the combination of woods and construction for the instrument should produce a pretty good “base” tone on its own. The preamp is really only there to boost whatever is already happening. You shouldn’t ever have to dial anything out. Also, “boost only” is a good simplification that prevents players from getting lost when dialing in their sound—which can be an issue when you have too many options. I have also modified the actual tone stack of the preamp to hit some of my own frequencies. Eventually, I’ll produce an original preamp for my instruments, but one step at a time!

I also utilize a patented fader design for my three-band EQ. My feeling there is that a three-band EQ is not useful if you have trouble dialing it in while you are playing. With the faders, it’s literally under your fingers in a way that a bunch of knobs are not, and you can visually see how each frequency compares to the others.

What has been the most challenging part of being a luthier?
Letting customers come to some conclusions and realizations on their own. It’s tempting to put an instrument in a customer’s hands and overexplain what’s going on with the woods and electronics. (Especially when you’ve spent countless hours in a room by yourself creating that instrument!) But I think that it’s more rewarding in the end for all parties to let them play and listen and feel what’s going on and come to their own conclusions.

What is your definition of tone?
To me, tone is personal, tone is your sound. It’s not just some magical combination of gear—it’s what you put into the playing and the instrument. It’s how the instrument reacts to what you put into it and how that psychologically contributes to your playing. I could play the same exact set up as someone else and still not sound the same.

And I think, to some degree, that’s why musicians are always on a tone quest. We’re always changing: the bass that felt perfect ten years ago isn’t right for where we’re at now or vice versa. It’s an evolving thing. Life is an ever-shifting tone quest.

As a musician, what musicians have made the biggest impact on your music?
I draw a lot of personal inspiration from bands born out of the post-punk years like Bikini Kill that stick to a basic musical formula but ultimately use it for complex emotional and political expression. I like music that punches me in the gut and makes me think.

What advice would you offer to someone interested in becoming a luthier?
You don’t need a shop or expensive tools or a guitar school education to get started: grab a good book. Take a hard look at that guitar or bass you are playing now and try to make it better. Learn to do setups. Learn to recognize that moment when you get a dramatic improvement in playability from tweaking the truss rod and action. Learn to fix the bad wiring and irregular switches and jacks that make your life miserable. Work on your friends’ instruments. Talk to a local shop about an apprenticeship or an entry-level job and see where it goes. If you want to get into it because you want to work on guitars for the rich and famous, this may not be the job for you. But if you like assessing and solving problems and really chasing things down, this might be the profession for you.