Back from the Dead is Halestorm’s personal snapshot of the pandemic. For Lzzy Hale, the band had been her lifelong way of navigating mental health issues. But during lockdown, all she could do was write.

“’Back From the Dead’ is about survival, not in a physical sense, even though I know we all have been touched by death especially these last few years,” said Lzzy Hale. “This song is personal and written from a mental health perspective. I wanted to give myself and the world a hard rock song we could shout out loud as the gates opened again. I was on the edge of this world getting completely lost in oblivion, but even though it was the harder of two choices, I didn’t just let the darkness and depression in my mind dig me an early grave. I didn’t just sit and let it take me. I’ve erased my name from my headstone, so save your prayers, I’m back! I hope this song, as I pass it on to you, reminds YOU of your strength individually and that you are not alone.”

We chatted with Lzzy about her upcoming summer tour, the new album, her new signature guitar, and tips for singing like a powerhouse.

Tell us about your upcoming summer tour in 16 cities with The Pretty Reckless, The Warning, and Lilith Czar, starting in Detroit on July 8.

We’re really lucky as a band to be in a position where we can handpick our friends to come out on tour with us. But it’s also important for me to lift up my fellow sisters and women in rock. So many women are rising up and owning this genre, making it a part of them. It was only a few years ago when I felt like I was the only one on a tour, bill or festival. This tour has a couple of generations of artists represented. It’s important to show the girls in the audience that they will be able to see themselves represented in all of us. Regardless of all the uphill battles that we had to take to get here, here we stand. And that’s going to make the bridge to whatever these young women want to do in life just a little shorter.

In “The Steeple,” one of the singles off the album, who are you referring to as your castle, kingdom, church and people?

For me, it was important to try to rebuild, for lack of a better term, that church and fellowship that we have with the audience. This isn’t just entertainment for us, although I know we’re in the entertainment industry. The line between audience and stage is very much melded together. We’re all there for the same reasons, because we have a primal need to be there. No matter what’s going on in any of our lives, as soon as those lights go down, you’re able to transform into whoever you want to be and sing your favorite songs shoulder to shoulder with people who used to be strangers and now have become family. It’s a beautiful thing to be a part of, and it was very important for me to write about it. I hadn’t been in that position for so long because of the pandemic.

Most of Back from the Dead was created through lockdown, and you’ve mentioned that you ‘carved yourself out of an abyss’ during its making. Was it difficult to write songs in the midst of experiencing the pandemic, and how was the creation process with your band?

I’ve been in this band since I was 13. My camaraderie with my band mates, and everything involving the band, are tools I’ve used all these years to navigate my mental health. When that is stolen from you and you’re left with only one weapon in your arsenal, which is to write through it, it becomes a little scary. I went through a small identity crisis, where I had to discover who I am without all of those things, and I hadn’t seen that girl in a while. I was reacquainted with some panic attacks, which I hadn’t had since I was a teen, and I went through a bout of depression. I had to step myself out of it by writing these songs in real time. So I discovered the reason why I write, which isn’t just because I love it.

As far as the band’s creation process, it became like a relay sport because we were all isolated: I’d do a small demo with terrible drums, because I’m a horrible singer-drummer, and send it to my band mates. They, in turn, would send me their instrumentals. We recorded this album differently, because I did all the vocals first to my initial demos — then we built everything up musically as a band in the studio. It was interesting because it’s more common to do the vocals last. But here, the vocals, lyrics, titles and song ideas were leading the charge. The vocal melodies and how I sang something became our reference point when we created the guitar parts.

The album is co-produced by Nick Raskulinecz (Rush, Foo Fighters) and Scott Stevens (Shinedown, Daughtry). What were their contributions?

Nick has so much energy, enthusiasm, and he brought out our best sides. We rediscovered what Halestorm is, and he guided us through that process. It was also his suggestion to bring in Scott, since we’ve written songs together and been buds and brothers from another mother for many years. Once Scott entered the project, he helped us put the puzzle pieces together.

As a guitar player, what was it like to work with Nick?

The thing I enjoy the most about recording guitars with Nick is that he will sit two feet from you, and we do everything in real-time — there’s no cutting in and out. He will be sitting there and enthusiastically yell at you, “alright, here comes the chorus… I need double scadooshes!” when he wants me to play power slides.

Nick also worked with Rush. In an interview with (late) drummer Neil Peart, he affectionately referred to Nick as ‘Booouge!’ because of his unique descriptions for the things that drummers play…

He has his own terminology and we’ve definitely gotten to know his language. But he really brings out the excitement in the playing. As a player, you can over-think, and it’s hard to capture the emotion when you’re trying so hard to be perfect. It’s never been about perfection with him; it’s more about the energy.

Joey (Hottinger, guitarist) and I ended up playing opposite roles on this album — usually, I’m playing the meat-and-potatoes parts while he’s creating the candy. On this album, I was the one who added a lot of the melodic overtones, octaves and up-high, twiddly bits. One of the biggest tools in my arsenal as a guitar player is that I’m a vocalist. I will think: ‘if I’m singing, how will my playing fit into the song? Is it complementing or is it rubbing against anything?’ One of my favorite parts that I played is the verse riffage in “Back from the Dead.”

As far as gear goes, we used a plethora of stuff, but Joey and I had bought a Korina Explorer and a reissue Korina Flying V around the same time. The V is very bright while the Explorer is very meaty, so we ended up combining these sounds. I also used my ‘Explorerbird’ that I designed with Gibson. It’s bright lipstick red and black, with an Explorer body and Firebird headstock. Because of its longer scale, it stays in tune really well, and we used it for many of the drop-tunings. 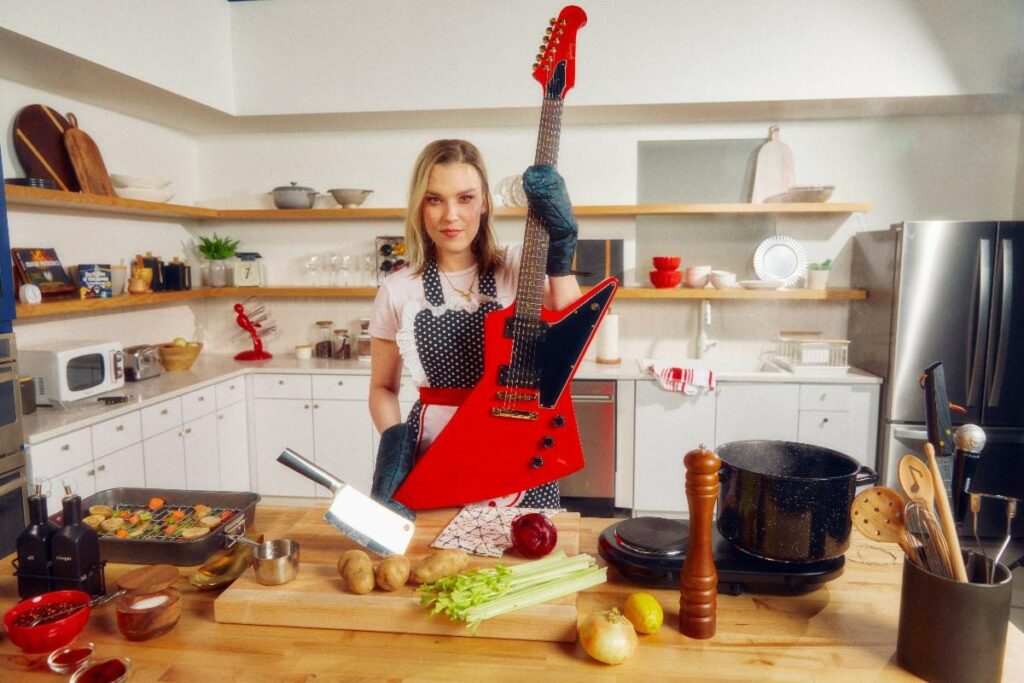 How do you project such power and intensity as a singer? Do you have any techniques or exercises?

Even with the guttural things that I do as a singer, it shouldn’t hurt. If it hurts, don’t do it. Everything should feel like nothing… effortless. I do train my voice quite often. But if you’re a beginner singer, the first and foremost thing that you should be learning is proper breath control, because the breath is literally the fuel for your engine. If that gets messed up, there’s a domino effect and you’re going to end up losing your voice.

Breath control can be a challenge and easy to forget when you also play guitar at the same time.

It’s a balancing act. Another thing you need to do as a singer is to get familiar with your resonance areas, which is basically your chest, head and mask. They are like different rooms in your body that reverberate sound. You can use these resonance areas and combine some of them into a blend to create that guttural sound or screams and other things without hurting your voice.

The funniest thing I’ve discovered that has become part of my warm-up, besides lip trills and tongue trills, are these singing straws that you can buy in different diameters. You can get cocktail straws in different diameters instead. You do scales or sweeps through the straw, and it helps everything relax… it becomes impossible for you to push too much air and overblow. You’re basically training your vocals to use as little air as possible and still have support. On this album, I probably went further vocally than I ever had, so these different techniques have definitely helped me in using vocal aggression in a safe way.

One thing is that your voice does change over time. Just because you sounded one way in your 20s doesn’t necessarily mean that you’ll sound that way in your 30s. In the last couple of years, I’ve definitely expanded my range, but I also know more about what I can do. I always tell young singers not to be afraid of aging, because you can still improve, as long as you’re doing the right things.