Nashville singer-songwriter and guitarist Caitlyn Smith recently released her sophomore record Supernova which includes her single “I Can’t,” her collaboration with Old Dominion.

Smith has written songs for Miley Cyrus, Dolly Parton, Jason Aldean, Kenny Rogers, Trisha Yearwood, Garth Brooks, Lady A, Meghan Trainor, John Legend, and so many more. As an artist, she’s been written about in Time Magazine, Rolling Stone, Billboard, and NPR, and been on the stages of the Today Show, Late Night with Seth Meyers, and The Tonight Show Starring Jimmy Fallon.

Your sophomore album, Supernova, was re-released as a deluxe edition, which includes a special collaboration. Tell us about the track “I Can’t” and how that came about.

I’m super grateful that my friends Old Dominion agreed to do a version of “I Can’t” with me. I was talking with Shane McAnally (by label co-president) about how I wanted a collaboration on the re-release, and he brought up Old Dominion, and I got really excited. I’ve known the guitar player, Brad Tursi, for a while—we met on the Willie Nelson Country Throwdown back in 2012—and I’m a fan of all the guys and their writing. They so graciously agreed to all play on this new version, and I’m so proud of it.

What was the reason for re-releasing Supernova, and tell us more about the album—songwriting and recording?

I first released Supernova on March 13th of 2020, the week of the COVID-19 shutdown—talk about bad timing! 🙃 As an artist, you spend years writing and recording a project—and to have its release met with the biggest event of our lifetime was pretty nutty. The album was written in a time of lots of change in my life, and I was pregnant while writing a lot of it, so I joke that there’s some extra emotions in the music. 🙂 I cut eight songs in LA with Leggy Landon, and the other four were cut in Nashville with Paul Moak. It was fun to push myself somewhere new with this album—sonically, it’s very rich, cinematic, and moody. And lyrically, I went a little heavier—songs on depression, anxiety, the hard work that’s put in to conquer your fears, loneliness—layered with all the highs and lows of ten years of marriage and being a new parent! Truly a record with ALL the feels. 🙂 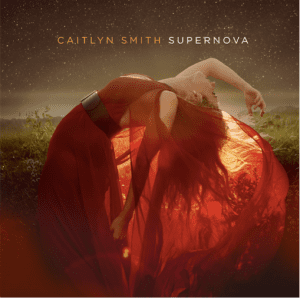 As a songwriter, you’ve written some very well-known songs from some of the biggest names in the industry. How did you get involved in the songwriting community in Nashville?

I first came to Nashville when I was sixteen years old and fell in love with the music community. I had no idea that being a songwriter was a job, and once I figured that out, it spurred me to start taking trips back and forth from my home state of MN to TN. I spent years and years traveling back and forth, crashing on people’s couches, meeting new people every time. I eventually met Beth Laird, who at the time worked at BMI, and she helped introduce me to almost every publisher in town. I spent years going around from office to office with my little guitar and playing people my songs. I finally landed my first publishing deal with Brett James’ Cornman Music in 2009.

Do you approach the songwriting process differently when you’re writing for someone else instead of your own material?

Absolutely. When I’m writing with another artist, my role is to dig around in their brain and try and help them say what they want to say. Or if I’m writing for “pitch” (for a movie or tv show), there is usually a script or a set of emotions you’re given, and you try to put it into a song.

When I go in with the intention of writing for myself, I think it’s a lot harder, more personal, digging around inside my own head and heart for my own truth and stories I want to share. It’s vulnerable, and I need to use a different toolbelt and mindset for sure. 🙂

The Girls of Nashville concert series at City Winery is a project that you founded, which is a great way to showcase Nashville’s female talent. What was the inspiration for this project?

We started The Girls of Nashville about six years ago. One night, my friends Mags Duval and Heather Morgan and I were sitting around after a show and talked about putting together a “writers round” with all of our friends—a Nashville term where you all sit in a row on the stage and take turns sharing stories and songs. We all invited a few girlfriends, and it turned into this huge show with thirteen girls on stage. The place was packed, and the energy was electric. We realized how much fun it was to hear and celebrate all our favorite women on one stage, and we turned it into a seasonal show. The music industry can be a bit of a “boys club” sometimes, but we don’t mind. These shows are a beautiful way to show that women are holding their own just fine. It’s become a destination show for some and is sold out every time, so if you want to catch a show, you’ve got to be quick! 🙂 Looking forward to starting the show back up hopefully sometime this year.

What inspired you to pick up the guitar and play? What other instruments do you play?

I grew up watching my dad play a little classical guitar here and there—Eagles songs and church music—and my mom would tinker around with Bach and show tunes on the piano. They were never professionals, just music-lovers, and they filled the house with it. I started singing around my little town in Minnesota and my dad would play guitar for me. But when I was twelve years old, I got a white Fender Squier Strat for Christmas, and there was no turning back. I’ve picked up lots of instruments along the way—piano, banjo, mandolin, and let’s not forget all the wonderful years in high school band playing the beautiful French horn, but guitar will always be my favorite.

Alison Krauss. Now That I Found You was my first cassette, and I listened to it on my little boom box all the time. My parents listened to rock and roll and country, and I was raised on Disney movies and learned to sing harmony from the hymns in church. When I was sixteen, I discovered Patty Griffin, and that was a game-changer.

Right now, I’m on a Rufus Wainwright kick. The new Chris Stapleton record is perfect. Patty Griffin is always my go-to when I need inspiration.

At the top of lockdown, I started a livestream conversation series called Lonely Together—as a way to cultivate some community and be a light in people’s life during a really hard time. I had a large array of guests—songwriters, actors, poets, dancers, and painters, and we mostly talked about the creative process. What inspires us, where we’ve been, and what keeps us going. It was a bright spot in 2020 for me. Social media has really been a brilliant place to connect while everyone is pretty isolated.

Top three songs on your playlist?

If we’re talking “dance party” (which happens a lot in our house with my two kiddos), it’s “I WANNA DANCE WITH SOMEBODY,” “Uptown Funk,” and “Kiss” by Prince.

Outside of music, what is your favorite pastime?  Hiking, foraging in the woods, camping—singing songs around a campfire is the best.

Music is:  The Remedy.