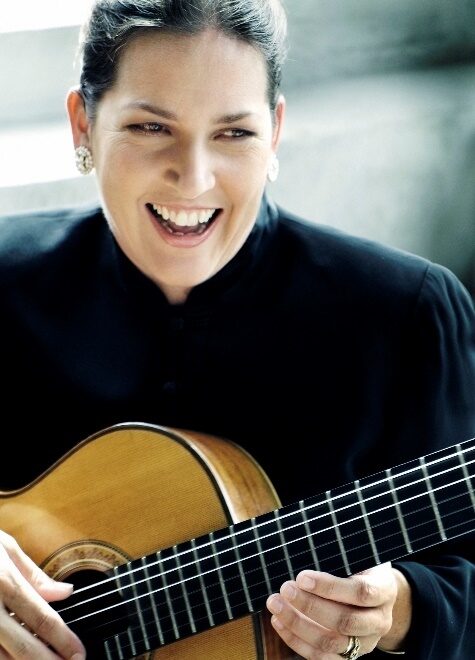 One wouldn’t think the Sixties television series The Monkees would inspire someone to become a classical guitarist. Laura Oltman, part of the Newman & Oltman Guitar Duo, was inspired by the show so much that she ordered her first guitar from the Sears catalog. She picked up a Mel Bay book and began on her journey to what would lead her to become a world-renowned classical-flamenco guitarist involved in numerous musical ventures.

The duo are founders and artistic directors of the New York Guitar Seminar at Mannes, Raritan River Music, and the Lanciano International Guitar Seminar in Italy.

Newman & Oltman Guitar Duo directed and performed at the Raritan River Music Festival in May. They will also be directing and performing at the upcoming virtual New York Guitar Seminar at Mannes in July and the in-person Lanciano International Guitar Seminar in conjunction with Estate Musicale Frentana in Lanciano, Italy, also in July and August.

What inspired you to pick up the guitar, and why classical music?

My inspiration to pick up the guitar was The Monkees, the TV show that was popular when I was a little kid. I bought a toy electric guitar from the Sears catalog so my friends and I could have a pretend band like the Monkees. My mom figured out from the instructions that came with the guitar how to tune it and play a couple of chords, something I had not envisioned when I bought it, but it was easy and fun. She got me a Mel Bay beginner guitar book, and I taught myself for a while, as many guitarists do.

I got interested in classical guitar because I was not much of a pop singer, and if you learn chords, you need to sing along. The great thing about guitar as a musical instrument is that it plays melody and accompaniment at the same time; no singing required. It is a lot like a piano in that way. But it is hard to teach yourself classical technique and repertoire, so I took lessons and found it very gratifying. I also had a taste for classical music in general.

One great influence in that regard was the Lutheran church, where we went to church and where I sang in the choir. There is lots of incredible music written for that church, especially by J.S. Bach. In addition, my parents had a substantial classical music record collection, so I heard and performed classical music a lot.

As a guitarist, Andrés Segovia was a huge influence on anyone studying guitar in the 20th century, which would include me. It is hard to describe how pervasive his influence on classical guitar was during his lifetime. During his career, it was possible as a classical musician to be known to an audience well outside of the classical music fan base. When the recording industry began, it was very focused on recording classical music. Commercial recordings made musicians world-famous almost instantly in a way that was not possible before the advent of recording technology. Segovia was in on the ground floor of the record industry, and by the end of his career, his name was truly a household word. I actually had a masterclass with him at the Metropolitan Museum of Art when he was about 90. I had a number of his records as well. I was also a Julian Bream fan. What I have always admired about Bream is the repertoire he played and commissioned. I loved the early music he championed, and I think he commissioned some timeless music for guitar. Of course, my main teachers, Luisa Sanchez de Fuentes, Bruce Holzman, and Oscar Ghiglia, were the biggest influences.

Tell us about your partner in the Newman & Oltman Guitar Duo and how the duo was formed.

Michael Newman and I are the same age, and in college, we both went to the summer music programs where music students would go for masterclasses and performing opportunities. In the U.S., the big festival where guitar was available was the Aspen Music Festival, where Oscar Ghiglia was the guitar teacher. There weren’t all that many other summer programs that included guitar, so everyone congregated in Aspen. We both went to Aspen for a couple of summers to study with Ghiglia. After college, I ended up moving to New York, where Michael was living, for graduate school. At first, we were pursuing separate careers but started playing more as a duo once we lived in the same place. After we were married, it became even more natural to work together. We have been able to do that for our entire careers, but it is not for everyone in a marriage.

What do you hope listeners take away from your music?

I hope listeners of my music take away something I never even imagined, like in that Roberta Flack song “Killing Me Softly,” which describes a performance of almost unintended intimacy from the perspective of the listener. Artists put the music, or visual art or written word, out to the audience, and the audience gives it meaning, often far beyond the ambitions of the creator. One time I heard the guitarist Michael Lorimer say what he thought made a great performance. He thought it had to be competent as a basic requirement, but a great performance had to have something about it that was astonishing or practically magical at some level. I agree with that. I would add that, like in the song, it has to create a bond of intimacy with a listener so that they feel like they have learned something about the person playing by the end. I guess a listener always learns something about a performer, although it may be that the performer isn’t telling them anything very interesting about themselves. So, I think you have to share with people something compelling about yourself in what you play. But I hope that listeners also find something about themselves in the music and find that it deeply relates to their own experiences.

As a music instructor, what is the best piece of advice you would offer a student pursuing a career in classical music?

The best advice I could probably give a student is that the arts as a business are extremely entrepreneurial. That is, people make up their careers; they don’t typically just get hired for a lifetime job. There are a few jobs that are more like being a highly educated professional, like playing in an orchestra. Orchestras are big, expensive arts institutions that can provide full- or part-time employment and benefits to classical musicians with the right qualifications. University teaching positions are another type of full- or part-time employment that can be more stable than orchestras. Even if you do have a job like a professor of music at a university, which is one of the more secure types of employment available for classical musicians, you still have to hustle your program to make sure there are students or scholarships or adequate facilities to attract students.

If you want to perform as a soloist, opera singer, or chamber musician, you become a self-employed entrepreneur, and you are the product, like being a widget. It is a good idea to see it that way, so you don’t take rejection personally and are willing to be persistent. There is no one route to a career, and the possible routes are always changing. You have to be willing to create opportunities for yourself rather than wait for others to reach out to you with opportunities. We had a friend who was a successful composer of all kinds of music, notably of commercial music, and his motto was “if you don’t fit into the system, make your own system,” which I think are words to live by no matter what you do.

A lot of parents are squeamish about their kids studying music in college and pursuing a career in music. I certainly understand the concern that there is no clear path to employment, and it is an incredibly competitive field. If a student has spent the better part of her life studying music and wants to be a musician more than anything else, she will find a way to make a career. And it will be something that will make her happy most of the time. People who have been very committed to music careers as students find ways to make a living because it is the only thing they ever wanted to do.

Another selling point of a music career is that if you are self-employed, you can’t be fired. I don’t say that facetiously because in all the economic upheaval of the past couple of decades, I have seen a lot of people with supposedly real jobs getting pushed out at the whim of employers who owe them no loyalty. When a person has all their eggs in one basket of employment, job loss is catastrophic. I have not regretted being self-employed even when economic conditions are uncertain. As your career develops, it is good to have a lot of irons in the fire, so to speak, so if one thing is not working out, another will be doing OK. It is kind of like investing in a diverse stock portfolio to hedge losses.

If I had it all to do over, I would marry this career again. It has been extremely fulfilling and full of great personal and professional relationships. I would recommend it to those who can’t imagine doing anything else.