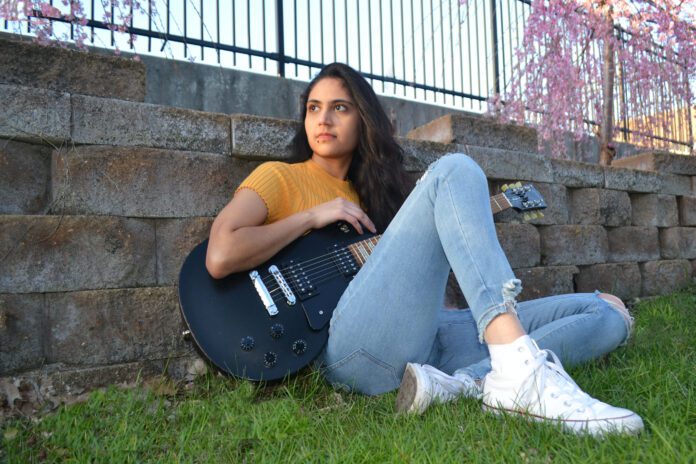 As a shy girl growing up in Chicago, Reva K didn’t connect as well with others as she did with her first guitar. After playing and writing for over a decade, she studied music production under the mentorship of Grammy-nominated producer ill Factor for a year.

Her subsequent debut single “Color on the Walls” garnered critical acclaim from music-industry veterans and judges of an international songwriting competition. That’s when former manager of Taylor Swift connected Reva K with her current producer who she began working with on her third single “State of Mind,” which resulted in new media attention, a sharp increase in streaming numbers, and international FM-radio airplay.

I don’t recall the exact thought process that led me to pick out a toy guitar for myself at age six but I know that I was confident about that decision. I got my first acoustic guitar at age eight and then my first electric guitar about four years later. That is the point when everyone around me realized that I was quite serious about pursuing music. I began to apply my guitar skills to more focused songwriting efforts and it was a regular part of my daily routine. As a shy and socially-awkward kid, songwriting felt like the most natural form of communication for me and perhaps that remains true to this day.

Where do you find the inspiration for your music?

Raw inspiration comes to me in many forms and often in between recording sessions. So, I have become pretty efficient at documenting moments of inspiration on my phone, which I can refer back to in the studio. They range from personal topics I can’t stop thinking about or specific phrases to basic chord progressions and top-line melodies. My creativity is consciously or subconsciously influenced by all the music I’m currently consuming. Right now, that includes Haim, Kacey Musgraves, New Order, Air, Lush and Eminem.

I constantly observe and process the world around me as well as my own reactions to it. When I’m unable to contain my thoughts and feelings, I set up a few mics, pick up a guitar and record whatever comes out. Sometimes I prefer to first program drum patterns and synth parts that I can riff over. I may compose ideas for many consecutive days before sitting down with my producer to discuss which demos should be developed further.

For over 15 years, I primarily composed ideas using one of my acoustic guitars. When I started writing a new batch of songs in late 2021, I went to my semi-vintage Les Paul Studio and it remains my go-to guitar for both writing and recording.

Music to me is…

Music is undoubtedly my favorite art-form. It seems that music is woven into so many important aspects of my life. Beyond the studies related to my own musical expressions, I often find comfort in it and some songs become permanently associated in my mind with specific people, places, and moments in time.