My name is Eva Atmatzidou, and I am a fingerstyle acoustic guitarist and composer from Greece.

Growing up in a country that East meets West has influenced my music experiences, my studies, and philosophy, and this is probably a vital part of my compositions and guitar playing.

My debut solo guitar album Trenova was released in 2016 by the American record label Candyrat Records and included original compositions for solo acoustic and 12-string guitar.

On January 2020, a new solo guitar single named “Message to Tommy Emmanuel” was released, and it is one of the new ones that will be in my upcoming album I am currently working on.

I perform my music live, and I spend my life studying as many things as I can.

What is your definition of tone, and how has it changed over the years?
Tone for me is the deep, recognizable, unique, and personal voice of a musician. In the past as my basic studies were on classical guitar, I would say that tone for me was the full, round sound that can simultaneously shine and move. I still believe in this, but through the years, I have added to this definition the charm of human “imperfection”. This exact conscious and unconscious characteristic that personalizes the sound can make it global at the same time.

Which guitars, amps, and pedals are you currently using and why?
I play mostly with an acoustic Lakewood D32. I have had this guitar for many years, and I have made some changes to it like the saddle and I have even changed the tuning of the top (yes, I did this!). I also play with a 12-string Larivee 03.

About amps and pedals, I have two outputs on my guitar. I “treat” them in a different way.

On the one, I use TC Electronics G Natural as a preamp and for some really quality effects, connected with a Vox Tonelab LE, for its warm output, plus its combination of effects and finally go out by a BBE Acoustimax. I didn’t follow the normal way of connections in this. I have made many tries until I found something that allows me to create sounds that I like.

For the other output, which is mostly for the percussive sounds that I play, I use just the BBE Acoustimax with an EBS Reverb. Natural sound, simplicity, and quality.

What about strings?
I use Elixir 80/20 Bronze with NANOWEB Coating (12-53). I like the quality of the tone and the brightness.

Are there certain recording techniques you prefer in the studio?
Not really, as in my compositions, I try to do different things each time, create new music images. This creates different needs and combinations for the recordings. It is one thing to record a standard tuning piece with effects and something really different to record a pure acoustic guitar sound with a Drop B tuning.

What I have found really important, though, is to work in the studio with a sound engineer that is really interested in helping you create what you have imagined and respect that. This is great, and this is important, as much as really knowing how you want to sound like.

How do you keep your sound consistent onstage?
Using the same equipment, I have found some easy and simple ways to do this. I have created some preset sounds that I have tested on several different speakers, and I also can work on the details of my final sound using the two BBE Acoustimax Dis, each for one output, which are very easy to use on stage. Usually, I will just have to adjust some EQ frequencies or make small volume balance changes between the two outputs.

What does your practice consist of?
The last years my practice focuses basically on what I find interesting while composing. So I could say that there are three parts of practicing for me.

There is the part of playing the guitar in a very free and experimental way, trying to reach ideas that I will really find challenging and that will make me want to play the guitar, and explore them.

Then, when I find something fascinating to me, I continue playing using my knowledge and “philosophy” on composing and orchestrating on guitar—to extend these ideas and make them something that I will really enjoy in the end. This is the most personal part and always takes the most time of my practicing, as I explore many ways, ideas, and possibilities of playing.

Finally, of course, the third part is studying my compositions when they are finished. This is when I play really carefully and slowly, to make clear the notes, the phrases, the sound, and my musical thought in general.

Separating practicing from studying, though, I would like to say that practicing basically on my compositions doesn’t mean that I don’t study other artists. I do a lot. But the last years, they are mostly composers, painters, architects, performers, not really guitarists. I have studied guitarists a lot in the past. Now I prefer to consider music more as an art (structures, forms, lines, colors) and less as guitar and techniques. I feel that this way has finally extended more my technique and enriched my ideas.

What is your advice for young women who hope to work in the music industry?
Knowledge, inspiration, risk, and faith: four words that can create an interesting life! 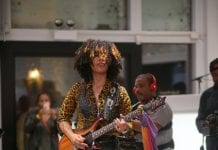 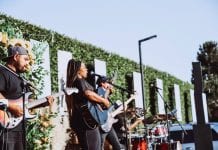