Home Interviews Ukrainian guitarist MaHA Rocks on new album ‘I Will Survive’ due out...

I am MaHA Rocks, a songwriter and solo artist based in Kyiv, Ukraine. My music is full of solo guitar parts because guitar is my starting point in songwriting. It is essential for me to write meaningful lyrics, which are the heart of every song. I believe they make people think. 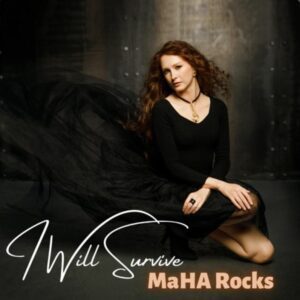 I will release my debut full-length studio album, I Will Survive, on October 17, 2021. Each album’s song is written in English, telling true-life stories expressed in rock, modern, and blues-rock genres. In support of the album, two singles will be released in September and October. And especially for Guitar Girl Magazine, I have the pleasure to announce that the song “Cannot Change Myself” is available for download in advance of the album’s official release date. This song is very girly, manifesting women, nature, and self-respect.

“With my music, I want to motivate people in finding their own successful path into happiness and joy, riding out difficulties, doubts, and recreancy.”

Tell us about your new music and the inspiration behind it.

Behind each song, there is a personal story either I have lived through by myself or felt empathy for the closest ones. No matter how difficult the situation is, there is always a way to come through.

Same as gradually threading beads on a string, I was writing song by song for five years. The recording and producing process took me about a year. As soon after I had recorded vocals for the song “Too often I was offered to die,” I have found out the reason for my unusually bit hoarse voice—my Covid-19 test was positive. The album was produced and recorded in cooperation with the best sound producer and session musicians in Ukraine.

My main message is a never-say-die attitude, which they can find in beliefs, self-respect, living down sad personal moments, and giving wings for those in romance.

When I was 14, I had to fight for the right to be admitted to the music school classes, which were already fully packed. I’m thankful to my classmates who gave me a place. Since the first touch of a classical guitar, I have fallen in love with its raw sound, which was uncovered with every Spanish and classic song I played.

In grateful appreciation, I could mention hundreds of my music influencers, whom I had the pleasure to see live on gigs and festivals. And one of them is Robert Plant, the legend, and surprisingly a very easy-going person. I will never forget our small talk during Dubai Desert Rock Festival on March 9, 2007. I’m also a fan of Colin James, the Canadian bluesman and outstanding guitar player whose music and vocals inspired me to write two blues songs for my upcoming album. I enjoy roots, especially blues and jazz renditions by Ella Fitzgerald and Billie Holiday. However, blues is an uncommon genre in my home country of Ukraine, so it was rather challenging to get the preferable sound. And undoubtedly, you may find me on the first row at concerts of such well-known artists as Shinedown, Zakk Wylde, Rob Zombie, Eric Clapton, Slash, Myles Kennedy, Santana, and many more.

After this album release, I’m going to work on new music and get back in the studio if the Covid situation allows.