An interval is the distance between two notes. For example, when you move from fret 1 to fret 2 on any string, you are performing a minor second interval (m2). This is the smallest increment of distance on our instrument (with the exception of using bends or slides to perform microtones), and is most commonly known as a half-step.

Pentatonic scales are composed exclusively of major second and minor third intervals. As most of you probably know, a major second interval (M2) is the distance of one whole step. On your guitar, that is the distance of two frets (like moving from fret 1 to fret 3 on a single string). A minor third interval (m3) is a half-step greater. You would have to move from fret 1 to fret 4 to accomplish a minor third. The complete interval series of a minor pentatonic scale is: m3, M2, M2, m3, M2.

These two types of intervals, major second and minor third, are generally “frictionless” intervals. Meaning, they do not express strong tension, and therefore, do not deliver impactful resolutions. That’s a huge problem if you’re trying to write riffs and solos that captivate an audience. Tension and release are essential components of strong soloing, and pentatonic scales often come up short. But why?

Because there are no half-steps in pentatonic scales. A half-step has the single greatest tension and release relationship of any interval — period. Just think of the famous theme song from the iconic 1975 thriller, Jaws. “Duuuh-dun! Duuuh-dun! Duuuh-dun!” Hearing that opening riff, we are immediately pulled back into the terrifying intensity of a vicious shark attack. The melody from the Jaws theme song, composed by John Williams, is comprised entirely of a single half-step interval, repeated over and over with increasing speed. That’s it — just one single half-step can cause millions of hearts to race.

Half-steps can make a melancholy riff even more desperate, or a sassy lick even more vivacious. Let’s take a look at how you can turn any boring pentatonic riff into a captivating melody by incorporating half-steps in creative ways. Be sure to check out our online scale finder to help learn these scale variations.

What are blue notes? Any note that is not in a song’s key, but can be used to create calculated dissonance, is a blue note. In the Blues Scale, the most common variation of the minor pentatonic scale, a note is added to the pentatonic, creating two new half-step intervals. The blue note provides a chromatic vehicle to move from the fourth to the fifth, or vice versa. More importantly, it gives us a note choice packed with attitude and emotion.

Because of these new relationships, we now have a new arsenal of riff weaponry — and our sights can now be set on dramatic impact. Beginning a riff with the blue note can elicit goosebumps, and ending a phrase on the blue note leaves the listener feeling “so wrong it’s right.” Because the blue note neighbors two pentatonic tones, there are now new ways to “color outside of the lines” of a pentatonic scale by adding these scandalous flavors.

Technically, any note that strays from a song’s intended key can be considered a blue note. Try using consecutive half-steps to connect pentatonic tones. This is called the Chromatic Approach and has been used by countless rock guitarists to construct some of the most gripping riffs of all time. “Master of Puppets,” “Kashmir,” “Holy Wars,” and “Dazed and Confused” — just to name a few — have this approach to thank for their undeniable magnetism.

The Chromatic Approach is also a fundamental flavor of soloing in jazz, bluegrass, country, rockabilly, and classical guitar styles. Stop thinking of pentatonic tones as The Rule and start thinking of them as a suggested outline for riff construction.

When it comes to incorporating half-steps into your pentatonic scales, it’s important to look at neighboring notes. This is a valuable tool if you have a decent riff, but want to really “send it out of the park.” And — it’s easy! Let’s take a look at a common riff writing roadblock and how neighboring notes can get you back in the fast lane!

Let’s say you’re working on a riff that is starting to come together but the ending feels a bit, well, less-than-satisfying. How we feel about a melody has everything to do with how it ends – its resolution. The last note of a riff defines the ending of a musical thought and determines how conflicted or resolved the listener feels. Give this a try: play the same melody; however, right before striking the final note, play the note that is A HALF-STEP LOWER FIRST. Trust me — this simple concept of neighboring notes can transform a good riff into a great one! Defying the listener’s expectation is immediately rewarded by the powerful payoff of a half-step resolution.

Don’t forget to be adventurous — experimentation is the heart of creation, and exploring your own ways of incorporating these concepts will yield the most unique and meaningful results. Using the pentatonic scale as a framework rather than a hard rule will enable to you take your playing from boxy-sounding to expressive. 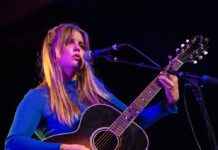 Beginner Chords You Can Play with Just 3 Strings