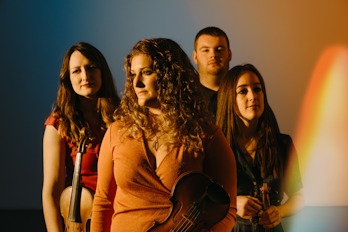 Of course there will be music, fun and Tønder vibes in spite of the cancellation of Tønder Festival 2021. The delights awaiting you in the Tønder Culture Centre – which has reverted to its old name, Schweizerhalle – include concerts with Mary Gauthier, Bjørn Eidsvåg, Sharon Shannon, The Deep Dark Woods, Delgres, Calby and Niels Hausgaard.

Audiences, musicians, technicians, volunteers, management and the local population have been impatient to get back in festival gear and reopen Tønder Festival. But corona restrictions shut down that idea. When cancellation became a reality, the festival management soon drew up ‘plan B.’ So now Tønder Festival fans can fire up the SatNav or climb aboard the train and head for Tønder in August.

A phalanx of both Danish and foreign musicians will be playing live at Schweizerhalle from 20th until 29th August 2021.

The Music Needs Us and We Need the Music

“We are distressed that we cannot run Tønder Festival in 2021. But our famous ‘Circle’ must be unbroken, and that means we have aimed all along to present music and keep our special festival atmosphere alive. No Tønder Festival this year, but something else to bring our audiences together to share the music,” says Maria Theessink, Tønder Festival’s artistic director.

All concerts and activities are at Schweizerhalle, formerly Tønder Culture Centre, from 20th to 29th August 2021. Tickets will be sold for each individual concert. Because of pandemic restrictions, tickets will be limited in number, and a minimum sale of two tickets imposed. Ticket sales open at 10 am on June 24th 2021 at tf.dk

For the second year in a row, Tønder Festival has had favour wristbands made, on sale for 100 Danish kroner through our webshop and in various shops and restaurants in Tønder. The favour wristbands are made of recycled polyester, with a pattern on both sides and a smart reusable fastener so you can wear them all summer. We dearly trust you will step up once more as a #tfsupporter.

Tønder Town Council will host a VIP reception on Saturday 28th August at 4 pm in Tønder Town Hall. The reception ends at 7:45 pm, when the guests will board buses to Schweizerhalle for the evening’s concert with Niels Hausgaard and The Deep Dark Woods, which begins at 8:30 pm. Balcony seats are reserved for VIP guests. Provost Henrik Frandsen and his wife will host the reception at Tønder Town Hall, where local gin from Brinksgaard Distillery and a buffet from Café Victoria will be served. A musical surprise is also planned. A restricted number of tickets will be available.

Welcome back to Grammy Nominated American songwriter Mary Gauthier, who excels at inviting listeners into her intense world of quietly epic stories in song. Mary Gauthier was born in 1962 in New Orleans. Her 1997 debut album Dixie Kitchen launched a career that has seen her recognised as one of USA’s most powerful and most personal songwriters and authors, whose first book Saved by a Song was published by St Martins Press this summer. Accompanying Mary Gauthier on stage at Schweizerhalle is violinist Michele Gazich, and harmony singer, guitar player Jaimee Harris.

Ireland has many musical feathers in her hat, and Sharon Shannon is one of the musicians who bear the international reputation of the Irish music tradition high. Born in 1968, Sharon Shannon, an acclaimed accordionist and violinist, began performing in public at an early age. Her accordion work up through the 80s led to her joining The Waterboys in 1989, and in 1991 she released her solo album, Sharon Shannon. This album became the best selling record of traditional Irish music ever released in Ireland. Her latest album is The Reckoning from 2020.

These three world stars of Scots and Irish music have played at Tønder Festival before, both together and in other constellations. At Tønder Festival 2018 they return with top flight tunes and songs. Michael McGoldrick is a founder member of Flook and has played with Lúnasa, and both he and John McCusker has toured with Bob Dylan and Mark Knopfler. John McCusker has worked with Paolo Nutini, Kate Rusby and Battlefield Band among others, and John Doyle was central to Irish-American group Solas and has accompanied celebrities as Kate Rusby, Linda Thompson and Joan Baez.

Their Tønder Festival debut was planned for 2020, but now they are here, sister and brother Sara and Sean Watkins.

In 2015, they released Watkins Family Hour, a collection of covers including Dylan’s Going, Going, Gone and Grateful Dead’s Brokedown Palace. The spring of 2020 sees the release of Brother Sister, wherein Sara and Sean have written all the material.

The Norwegian songsmith Bjørn Eidsvåg has a large following in Denmark, while in his homeland he is one of the best-selling recording artists. His lyrics touch on existential matters, such as faith and doubt, and he can deal with big questions in simple, accessible songs. He has often been described as the thinking person’s songwriter, his music inspired by folk, rock and the ballad traditions, with input from bossa nova, soul and jazz. Bjørn Eidsvåg was born in 1954 and is an ordained minister. His most recent album is Tabt Paradis (Paradise Lost) from 2020.

The Deep Dark Woods (CAN)

Their last visit to Tønder Festival in 2012 proved that there is reason to expect great things of the return of the Canadian band The Deep Dark Woods. Fronted by singer and guitarist Ryan Boldt, The Deep Dark Woods deliver original songs with respect for the artistry, the narration and the traditions. They reference Scots and Irish folk songs and American country blues, there is also space for surrealism, emotive murder ballads and close vocal harmonies. www.thedeepdarkwoods.com

31-year-old Dylan LeBlanc has already established a name for himself as a musician and songwriter with his clear tenor voice and his melodic command of the rocky side of americana. He started playing music and writing songs at an early age and released his debut album Pauper Field in 2010. It and its successors gleaned good reviews, as did his fourth album Renegade from 2019. Dylan LeBlanc appears solo at Tønder Festival.

The Fara group come from Kirkwall in Orkney and began life in 2014 as a quintet. Today, Fara is a quartet: three female violinists, Kristan Harvey, Jeana Leslie and Catriona Price, and pianist Rory Matheson, who is from the north-western coast of Scotland. Fara’s is a fresh musical take on Scots folk music, and Orkney music in particular. Fara played at Tønder Festival in 2015 and 2017.

Calby is a new Danish phenomenon in the field of soul, pop, indie rock and americana. The man behind the name is songwriter and producer Mik Thybo, who has over 15 years’ experience in the business, making music under his own name and producing for others. His live debut was in 2019. His debut album Burnout appeared in May 2021. Calby will be backed by his band.

Delgres is named for the partisan hero Louis Delgres, who challenged the power of the French in Guadeloupe at the time of Napoleon. Musical liberty is the trio’s essence, and they were soon touring hard. The style is blues, roots, New Orleans rhythm and Latin, with Pascal Danaë’s guitar at its core. Delgres’ most recent album is 4:00 AM (2021). Delgres played at Tønder Festival in 2019.

The well-established singer Kira Skov has moved from rock to jazz and on to a quiet, singer-songwriter style, with artistic integrity and a healthy curiosity. Her latest album is Spirit Tree (May 2021), with Bonnie ‘Prince’ Billy and Mark Lanegan among the guests contributing. Kira Skov often returns to rock and jazz, and this concert focusses on the latter. In 2011, Kira Skov released an album Memories of Days Gone By – an homage to the legendary Billie Holiday.

The Danish singer, poet, satirist, songwriter, polemicist and entertainer who has had pride of place at Tønder Festival since the 70s. Niels Hausgaard is one of a kind and he reaches a wide audience. No two Niels Hausgaard concerts are alike, since he leaves himself ample room for improvisation and plays off and with the audience. He maintains that the success of a concert depends on the contact he achieves with his audience.

In recent years, songwriter and singer Dorthe Gerlach has worked both solo and in the duo Hush. Tønder Festival’s audience have heard and seen Dorthe Gerlach several times before, and now she is back with her band and a brand-new (April 2021) EP Krigerhjerte (Warrior Heart. Besides recording and touring as a soloist, Dorthe Gerlach is also known throughout Denmark through her appearances in the TV2 programme Toppen af Poppen (Top of the Pops).
http://dorthegerlach.dk

Hymns From Nineveh and Who Killed Bambi (DK)

The great American songwriter John Prine (1946-2020) had to cancel his appearance at Tønder Festival in 2019 because of ill health. Instead, Tønder Festival put on a tribute concert for him, and it was a memorable, warm event. Among those taking part were Caitlin Canty, William Crighton, Tide Lines, Hudson Taylor, Poul Krebs and Irish Mythen. The concert was filmed, and this is the film you can see in Schweizerhalle on Tuesday 25th August in connection with a lecture about John Prine given by Andrew Hartvig Cranfield, Library and Culture Chief in Tønder.