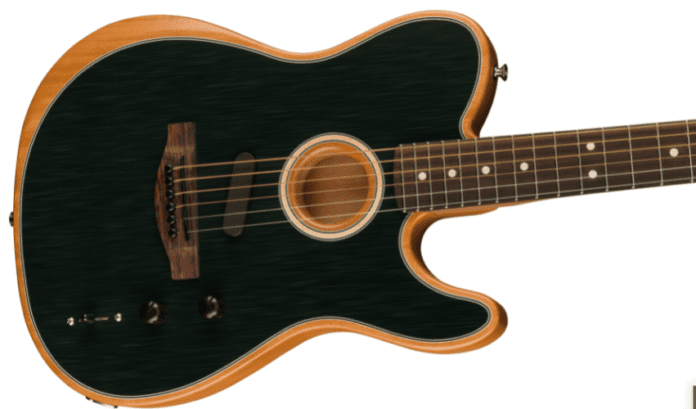 “Through the success of our American Acoustasonic® series, we saw that the modern musician demands flexibility and efficiency in their creative pursuits,” said Billy Martinez, Fender VP Category Manager, Acoustic and Squier Division. “Our dedication to expanding our Acoustasonic® platform allowed us to meet this demand and, at the same time, create more accessibility. With iconic acoustic voicings, big electric tones and one powerful blend knob, the Acoustasonic® Player Telecaster® rises above artists demands allowing the player to go from acoustic to electric with ease in our new all-in-one guitar.”

The Acoustasonic® Player Telecaster® is a true sonic shape-shifter, emulating the artists who play it. To prove it, Fender assembled a diverse and dynamic line-up of artists to showcase everything the guitar has to offer. From its true hybrid nature to its many shape-shifting forms (studio tool, stage-ready performer, songwriting partner and beyond), this guitar feels equally at home in the hands of enigmatic songwriters like Lucy Dacus and Conan Gray as it does on the experimental pop anthems of Self Esteem and the dance-floor disco of SG Lewis. It can inhabit the glam-rock rebellion of Jesse Rutherford one minute and the timeless soul of Jordan Mackampa the next. Powerful enough to forge brand new genres with Danny Felix and nuanced enough to accompany the contemplative folk of Faye Webster.

These artists will take part in Fender’s campaign launching the Acoustasonic® Player Telecaster®. In a new serialized content series, Re-Creation Remixed, Conan Gray, Jordan Mackampa, Jesse Rutherford, Faye Webster, and more will perform songs that inspired their careers while utilizing the technology of the Acoustasonic® Player Telecaster®. Fender will also support the launch with another instalment of its Versatile by Design series, exploring the design, construction and operations of the brand new Acoustasonic® guitar facility built in Ensenada, Mexico. The series will showcase the beauty and history of the world-class craftsmanship Ensenada holds, including an interview with Melissa Dougherty and an in-depth tour from Fender’s product managers on the ground in the new factory. Episode 1 features Fender EVP of Product Justin Norvell as he talks through the streamlined, powerful features of the guitar, and the creative potential provided by each of the six voices in three pairings.

Born out of a constant drive to innovate, the well-received Acoustasonic® platform required building an entire new factory from the ground up to make this new extension of the series platform. The new building sits on its own parcel in Ensenada, Mexico, adjacent to Fender’s long-standing Mexico factory which has been building Fender® guitars for 35 years. The new Ensenada factory, which is now 43 percent larger than Fender’s Corona factory, will handle all things for “Made in Mexico” that are on the Acoustasonic® Player platform. In addition to helping meet the global demand for the Acoustasonic technology, the additional factory location will bolster the Ensenada community by adding over 100 jobs with room to grow in the future.

“The expansion of the Ensenada factory has been a 26-month long journey, but one that’s been completely necessary to make Acoustasonic technology available to a widespread audience of players around the world,” said Ed Magee, EVP Operations at Fender. “We have an incredible depth of engineering, operations and guitar building experience in Ensenada and this investment gave the team an opportunity to tackle a brand new guitar manufacturing process to meet the growing creative needs of our players.”

“We are proud to have the latest Acoustasonic® guitar, an incredibly high-caliber instrument, coming from our world-class factory in Ensenada, Mexico. This will pave the way for future growth of Fender Acoustics as we continue to push the boundaries of true sonic innovation and open the doors to new creatives in search of an affordable hybrid guitar,” remarked Billy Martinez.

Top highlights include:
⦁ A simplified feature set consisting of a 3-way Voice Selector and a powerful Blend Knob, the Acoustasonic® Player Telecaster® (APT) is our most streamlined Acoustasonic® model yet.
⦁ A powerful Fender and Fishman®-designed pickup system allows you to flip seamlessly between electric and acoustic voicings, while the fully-hollow, naturally-resonant Telecaster® body offers rich acoustic warmth when unplugged. The guitar’s body feeds the Acoustic Engine with its naturally loud and resonant design. It also makes plenty of sound unplugged – perfect for a couch jam or songwriting session.
⦁ Modern N4 noiseless pickup provides authentic Fender electric tones without the hum.
⦁ Features 3 unique voice pairs for a total of 6 “best-of” acoustic and electric voicings that can be played solo or blended to create all-new sounds.
⦁ Premium construction elements like the waterfall soundhole, forearm contour, scalloped heel and recessed backplates are designed for sound, comfort and visual appeal.
⦁ New colors like Butterscotch Blonde, Shadow Burst and Arctic White – plus more neutral tones like Brushed Black.