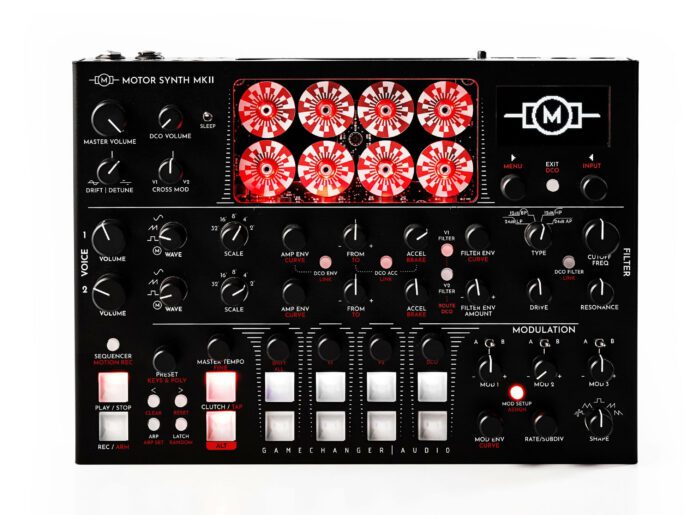 Audio electronics inventors Gamechanger Audio return to Berlin to present the newest
version of their electro-mechanical desktop synthesizer – MOTOR Synth MKII. The
company has expanded on features and the overall capability of its unique technology.
Separate multi-mode analog filters, redesigned modulation section, and additional digital
voice equipped with a separate envelope, portamento section, and digital multimode
filter are only some of the new upgrades and features. Find out more info and the full
layout of the new design – https://gamechangeraudio.com/motor-synth/

The Motor Synth was introduced in 2019. It is based on a unique motor oscillator engine – this is a system of electro-motors that are able to instantly change their rotation speed in order to produce musical notes. These motor oscillators can produce four distinct waveforms – Sine, Saw, Square and the so-called M waveform. The M waveform is produced by a set of electromagnetic pickups that are placed next to each motor’s rotating inner coils. As the coils rotate the motor’s coils create electromagnetic fluctuations that can be amplified to produce a unique Motor waveform. The Sine, Saw and Square waveforms are produced by a set of specially designed Optical discs that are mounted to each Motor’s shaft. Each Motor Disc has three “tracks” engraved onto its reflective surface. These “tracks” are designed as a circular optical representation of the Sine Saw and Square waveforms.

Each reflective “track” is paired with a separate infra-red laser and sensor that picks up the reflected beam. As the disc rotates and brings the differently shaded areas in circular motion, the infra-red reflectivity sensor begins outputting a so-called “Optical Waveform” – a proprietary technology that we developed specifically for the MOTOR Synth.
Besides the unique Motor oscillator engine, additional features include:

TWO INDEPENDENT MOTOR VOICES
The MOTOR Synth offers two separate MOTOR Voices with 4 Electromotor oscillators each –
both voices can operate in mono, unison or in four-note polyphonic mode. Both MOTOR Voices are equipped with a separate set of controls for adjusting VOLUME, SCALE, WAVESHAPE, individual AMP ENVELOPE engines for each musical note, as well as very detailed control over a deep and versatile PORTAMENTO / PITCH MOD section (called “Acceleration / Brake”).

DIGITAL VOICE
The MOTOR Synth MK II features an additional third voice – a digital engine that can be used either independently or to augment the raw sound of the MOTOR Voices.
The Digital engine (DCO) can be used to produce various classic waveforms (with
waveshaping) or as a noise generator. The DCO is also equipped with a separate, fully
controllable AMP ENVELOPE, PORTAMENTO section, and its own Digital multimode Filter
designed to reproduce the 4 analog filter modes.

CONFIGURABLE STEREO OUTPUT
The MOTOR Synth has a single output jack that can be configured either as mono, or as a
stereo output – thus routing the synth’s two motor voices into separate channels. The Digital voice can also be routed to the V1 or V2 outputs, or to both.

MODULATION SECTION WITH THREE ASSIGNABLE LFOS
The MOTOR Synth MKII also features an extremely powerful modulation section that includes 3 individual LFOs with adjustable positive and negative depth controls. Each LFO can be easily assigned to almost any knob or encoder value on two independent modulation slots A and B.

There are five independent modulation waveforms available for each LFO – each with a detailed waveshaping engine.

PERFORMANCE KEYBOARD
Non-velocity sensitive 8 key keyboard with 4 pitch shift encoders – this is a small but powerful note input system with a lot of performance tricks up its sleeve. Alternatively, the MOTOR Synth is fully MIDI and CV compatible and can be used with all of your favorite keyboards (incl. poly-aftertouch), controllers and sequencers.

As an instrument that uses electromotors as its main sound source, Motor Synth inherently
possesses many unique sound traits that will surely appeal to many musicians that favour
analogue electronic instruments and synthesizers in particular. With its unusual tonal and
timbral qualities, unlimited microtonal pitch adjustment and modulation abilities, and note attack and decay properties influenced by the acceleration and deceleration curves of electromotors, Motor Synth works well across a wide range of musical styles. Whatever way anyone chooses to play Motor Synth a stunning visual experience is guaranteed. Motor Synth’s see-through protective glass cover above its core sound system of eight electromotors enables users to receive visual feedback from the instrument itself by being
able to see those spinning electromotors in action. The visual experience is enhanced by the visible set of reflective optical disks attached to the electromotors’ shafts being coupled to a set of eight mini strobe lights, so those spinning disks themselves turn into a hypnotic light show, courtesy of the strobe effect! 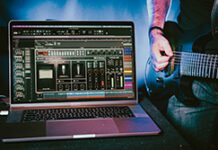