PRAGUE, CZECH REPUBLIC: having released Electrum to widespread critical acclaim earlier this year, independent development teams federation United Plugins is proud to push development partner Muramasa Audio’s all-in-one guitar solution straight to the desired guitar tone as Electrum Core — cutting to the chase by effectively stripping away the amazing Amp and Cabinet components from the former’s effects-laden single-screen pedalboard to form an on-point plugin with equally eye-catching attributes at its channelled creative core — as of December 1…

In today’s teeming marketplace, most — even great-sounding — guitar software suffers from flawed design, doing little to enhance efficiency and comfort when put to work in a musical environment. Ergonomics is, conversely, central to Muramasa Audio executing Electrum earlier this year as an all-in-one single-screen guitar amp and pedalboard plug-in, providing its intended users with the fastest way to turn ideas into the perfect guitar sound. No need to take a deep dive through muscle memory-taxing menus in search of hidden options since everything is already accessible on one screen. Saying that, though, this all-in-one guitar solution — while wonderfully implemented — is still too complex for some, seeking an altogether more straightforward approach.

As such, stripping away the amazing Amp and Cabinet components from Electrum’s effects-laden single-screen pedalboard to form an on-point plug-in with equally eye-catching attributes at its channelled creative core readily represents Muramasa Audio’s answer to the question of getting straight to the desired guitar tone. Achieving a perfect sound for any electric guitar is, indeed, quick and easy when working with Electrum Core, so diving into what is on offer does not involve taking a deep dive — no menu diving required!

Featuring five versatile amps — BLUE, YELLOW, ORANGE, RED, and BLACK — arranged from lighter touch to most extreme, Electrum’s Amp section is at Electrum Core’s creative core. Conveniently, all share the same controls, placing familiarity at the heart of a delightful user experience enhanced further with fast workflow. While analysing the most popular amps on the market to first flavour Electrum — and now Electrum Core — with the sound of those amps, musically, Muramasa Audio added several perks to the production proceedings, allowing any user to quickly create an amp that truly meets their own needs. Needless to say, several straightforward controls are the order of the day here — namely, GAIN (controls the input gain of the simulated amp); BASS (controls the amount of the amp EQ’s low frequencies); MIDDLE (controls the amount of the amp EQ’s middle frequencies); TREBLE (controls the amount of the amp EQ’s high frequencies); POWER AMP (defines the amount of the distortion produced by the power amp, the second stage of the amp); HIGH CUT (filters — useful for removing high frequency content, which often gets too bright and difficult to mix); BALANCE (defines the amp’s tonal character); and OUTPUT (controls the output gain). Thereafter, TIGHT MODE (filters out additional low frequency content from the input); EMPHASIS FREQUENCY (allows additional customisation of the amp since pre-filtering the guitar sound itself profoundly affects the distortion character); EMPHASIS (accents the frequency determined by the EMPHASIS FREQUENCY control, which can customise the amp to truly create the user’s ‘own’ sound); COMPRESSION (controls the amount of compression applied to the guitar tone); SAG (simulates the drop-off of the power supply voltage in response to large transient signals, so adds a certain dynamic ‘feel’ to the tube amplifier that is not generally found in solid-state amplifiers); LUSTER (adds extra brightness and sparkle to the sound of the amp); and CORROSION (applies ‘rust’, ‘dirt’, and analogue feel to the amp section).

Similarly straddling simplicity and creativity, Electrum Core’s — Electrum-extracted — Cabinet comes complete with 16 SPEAKER sounds based on classic guitar cabinet loudspeaker measurements, customisable to produce over 300 virtual cabinets! Acting as a true virtual simulator with several parameters, including a bank of AMBIENCE responses to simulate the reflections from real cabinet surroundings, it produces a much smoother and natural sound by avoiding any unnatural resonances present in almost all classic IRs (Impulse Responses) — no need to audition any IR files in what can sometimes seem like a never-ending search for the right tone, in other words. Controls could not be simpler — SPEAKER (lets users select from those 16 predefined speaker sounds based on some classic speaker measurements to provide the basis of the cabinet sound); CHARACTER (lets users further customise the cabinet sound with those 300-plus virtual cabinets); OUTPUT (controls the output gain); TILT (makes the cabinet sound darker or brighter using a very natural tilt filter); DETAIL (adds resonances to the cabinet, the character of which depend on the CHARACTER parameter); STEREO (switches on a stereo width-producing effect — a little like using a good combination of cabinet IRs, only every combination always sounds ‘good’); AMBIENCE (selects from a bank of ambience responses to add to the cabinet, simulating the reflections from the surroundings of the real cabinet); and DEPTH (controls the amount of mixed-in ambience).

A useful selection of global controls include ANALYSE INPUT LEVEL — an automatic input level setup, which makes sure everything sounds as good as possible, no matter what equipment and guitar is in use; INPUT — for cranking up the instrument’s input gain (albeit should not need to be used if activating ANALYSE INPUT LEVEL); BASSMAN — for controlling the level of the ‘sub’ generated by the plug-in to allow for bass-like guitar-playing (albeit only works well when playing single notes, not chords); OUTPUT — for controlling the plug-in’s overall output level; and LIMITER — to protect the output signal from going over 0 dB.

Well worth mentioning is the photorealistic nature of the Electrum Core plug-in’s gorgeous GUI (Graphical User Interface), imbuing its users with a feeling that they are touching real-world hardware. However, it easily adapts to their needs since they can always drag the arrow at the bottom-right corner to change its size — smaller to save precious ‘screen estate’ or larger to make it easier on the eye and, as a result, easier to use.

Ultimately, Electrum Core provides maximum audio quality by using internal 64-bit audio processing as well as being able to handle any sampling rate — as, indeed, is the case with all plug-ins released under the United Plugins umbrella, so why not try it at 192 kHz… or even higher! Helpfully, the Electrum Core plug-in intelligently detects whether it makes sense to perform any processing at all — if not, it temporarily turns on sleep mode, meaning it requires virtually no CPU (Central Processing Unit) power at all, thereby saving computing resources for other processes. 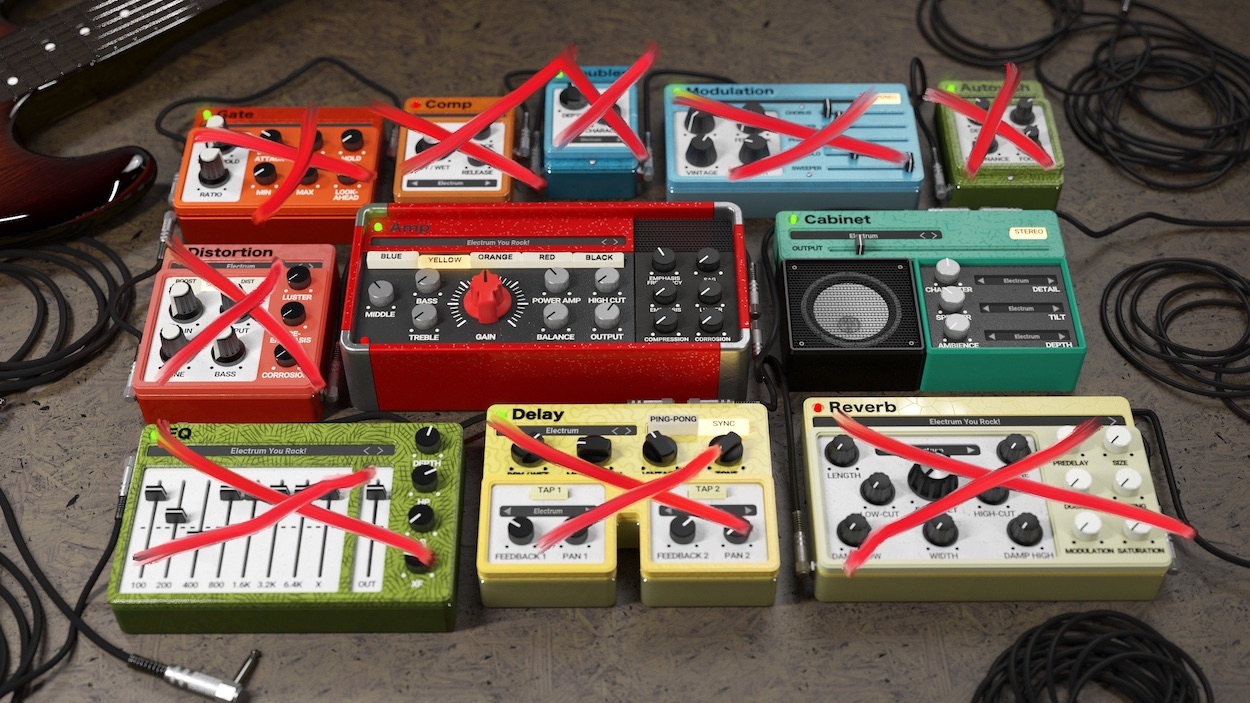 Muramasa Audio’s Electrum Core is available to purchase at an almost giveaway introductory promo price of only €9.00 EUR until the end of 2021 — rising thereafter to an attractive regular price of €49.00 EUR — as an AAX-, AU-, VST-, and VST3-compatible plug-in (using internal 64-bit audio processing capable of handling any sample rate) directly from United Plugins here: https://unitedplugins.com/ElectrumCore/

A 15-day, fully-functional trial version of Electrum Core for macOS 10.10 and newer and Windows 8/10 can be downloaded for free from here: https://unitedplugins.com/download/

Note that no iLok, dongle, or internet access is required for Electrum Core activation. (All United Plugins software uses license files for activation and owners can freely use purchased software on all their computers as long as they are the user.)