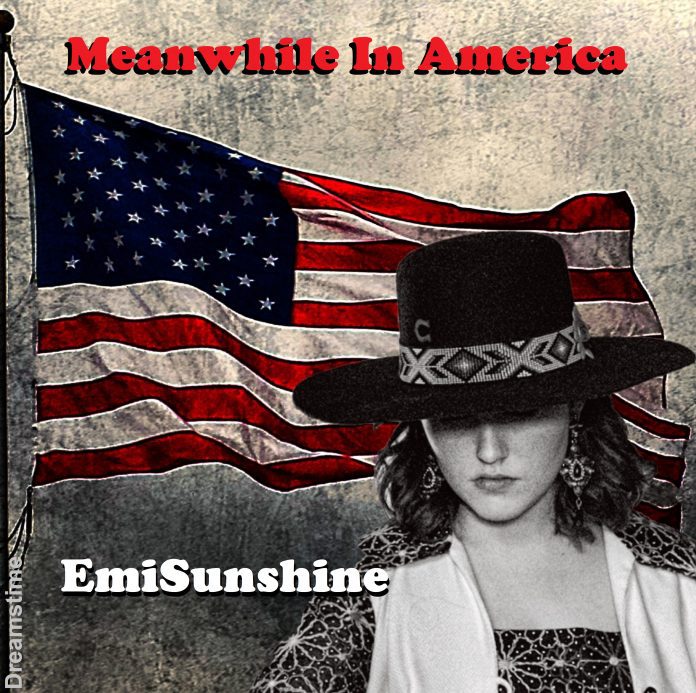 In 2019, singer-songwriter EmiSunshine recorded “Meanwhile In America” for her album, Family Wars. Written by Emi, Alisha Hamilton, Kyle Jacobs, and Vicky McGehee, the song explores what it means to be free in America, compared to problems in other parts of the world. Recent events in Afghanistan have prompted the 17-year-old artist to release the single to country and Americana radio stations. Guitar Girl Magazine caught up with Emi, Kyle Jacobs, and Vicky McGehee.

EmiSunshine: Just watching everything that’s going on right now in Afghanistan; thinking about all the innocent lives. One of the lines in the song is, “Meanwhile in Afghanistan, a mother was stoned to death for teaching her little girl how to read.” It’s heartbreaking, especially how women and girls have been treated by the Taliban in the past. They had gained so much freedom in the past few years. It’s horrible to think things might go back to how they used to be, with women and girls not being educated and not being able to be enjoy music.

What is the message behind “Meanwhile in America?” Do you feel the song is more relevant now than when you wrote it?

EmiSunshine: I wrote “Meanwhile In America” with my friend Kyle Jacob’s (Kellie Pickler’s husband), my mom, Alisha Hamilton, and Vicky McGehee. We sat down for a write and Kyle, who does lots of USO work, was talking about some of that. It just kind of poured out as a collaboration of all of our thoughts and experiences.

Kyle Jacobs: I feel like “Meanwhile In America” is as relevant as when we wrote it. With things going on in Afghanistan, it’s taken on some new legs and hopefully can have more of an impact on people hearing it. To have someone young like EmiSunshine singing about this stuff is very powerful.

Vicky McGehee: After watching what’s been going on in Afghanistan over the last few days and weeks, I think the song is even more relevant. Looking back now on the day we wrote “Meanwhile In America”, the only thing I would change would be to write the entire lyric in all caps – it’s just so on point right now. When we wrote the song we talked about how privileged we are here in America to chase our dreams no matter how crazy or farfetched. We talked about a young girl picking up a guitar and running with her dream and taking that dream as far as she wanted to take it. We forget sometimes how lucky we are.

Kyle, you play the piano on the studio recording of “Meanwhile in America.” What do you remember about working with Emi and producer Tony Brown in the studio?

Kyle Jacobs: Working with Tony Brown was a dream come true. He is a hero of mine and an icon in country music history. It was funny because when I stepped into the studio and sat down at the keyboard, Tony ran off to get lunch. I breathed a sigh of relief that he wasn’t in the studio, because I was nervous. We started with a click track and Emi started singing while I was playing, but it felt too robotic, so I suggested trying it without a click. We played it through, and Emi sang so amazingly beautiful. It was unreal. I had my headphones on, and the next thing I remember hearing was Tony Brown saying, “That’s beautiful. We’re done.”

Kyle, is it true that part of the inspiration for the song came from your involvement with the USO? Tell us about it.

Kyle Jacobs: I’ve been on ten USO tours, so I’ve seen what happens in other countries and how hard our troops work. Our mission is to bring music and bring home to them and let them know that we love them. Then you come back home and people in America are complaining about not getting an iPad on time or other minuscule stuff. The problems most of us have in this country pale in comparison with everything that’s going on right now in Afghanistan.

Vicky, many people in Afghanistan, especially women and girls, are fearful of what the future holds, now that the Taliban is in control. How is “Meanwhile In America” relevant to that issue?

Vicky McGehee: The first line in “Meanwhile In America is “I wake up wrapped in red, white and blue.” EmiSunshine is the perfect example of this song. She picked up a ukulele as a young girl and didn’t have a second thought about following her dream.  In other countries, there are women and girls who aren’t allowed to follow their dream. It’s so sad to think about the lack of possibilities that children around the world have and that’s why we have to be so appreciative of being an American. Our freedom is something we can’t take for granted.

Emi, what do you hope your fans take away with them when they listen to this single?

EmiSunshine: I hope they will find some gratefulness for living in America and enjoying the freedoms we have, even if things aren’t perfect. As divided as we are as a nation, I would love to think this song might prompt some sort of empathetic chain reaction. I know that’s pretty ambitious, but a girl can hope!

Emi, share with us a little about your band.

Emi, when and why did you get involved in music?

EmiSunshine: I’ve always been musical. My grandmothers’ taught me harmony before I could even talk. I matched pitch at nine months. I played piano by ear enough to pick melodies at five, as well as write my first song. At six, I started my family band and at seven, I started playing ukulele and took over as leader of the band. From there I’ve just grown and learned instruments along the way. My mom taught me how to write songs when I was a little girl, and we’ve been collaborating ever since.

Emi, when and what inspired you to pick up the ukulele, and what’s your go-to ukulele for songwriting?

EmiSunshine: My fingers were too small to play guitar, so mom bought me a uke. That was it. It stuck.

When I play the uke, my Kala Super Tenor is what I use daily. When I play guitar, I use my Martin tenor for guitar songs or my Fender Tele. I like playing my banjolele for old-time songs. Sometimes I will use an odd instrument to prompt me, like an autoharp. It just depends on the situation.

“Meanwhile In America” is distributed to radio through Play MPE. It is also available through most digital music platforms.

Connect with EmiSunshine and Kyle Jacobs