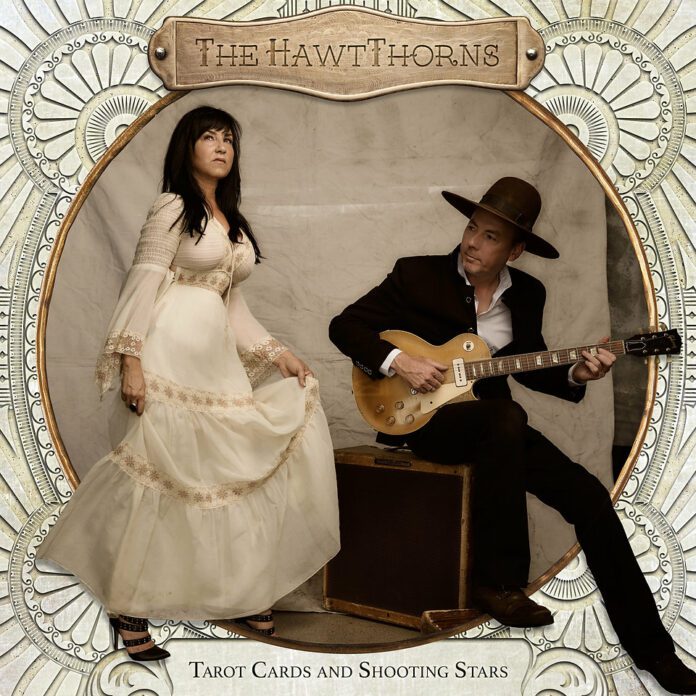 The HawtThorns are proud to announce their upcoming release, Tarot Cards and Shooting Stars, available February 25, 2022, via Mule Kick Records.

An Americana band whose sun-kissed songwriting, versatile guitar work, and lush vocal harmonies evoke the California coastline as much as the Bible Belt countryside, The HawtThorns are rooted in the collaborative chemistry of husband-and-wife duo K.P. and Johnny Hawthorn.

Tarot Cards and Shooting Stars mark the band’s second collection of hook-driven country-rock and amplified Americana. Recorded in both L.A. and Nashville, it nods to both sides of the group’s geographic and musical roots. The Nashville sessions took place in K.P. and Johnny’s home studio, sandwiched between walks around the couple’s new neighborhood, with cicadas chirping outside the studio doors. The southern culture and Tennessee humidity seeped its way itself, adding gospel-soul grit to “Let’s Get Together” and Allman Brothers-worthy swagger to “On The Way.” A lush, layered album with diverse arrangements, Tarot Cards and Shooting Stars finds the group embracing its new home without forgetting its roots.

The connection between K.P. and Johnny was immediate, and the two spent their first date playing songs together. Before long, they were writing songs of their own, too — melodic music that made room for K.P.’s voice, Johnny’s guitar, and plenty of collaboratively-written hooks. The two soon became newlyweds, their sound mirroring the mutual respect and reverence found in their marriage. With Tarot Cards and Shooting Stars, the pair’s second collection of country-rockers, acoustic ballads, and southern soul songs, that chemistry reaches a new peak.

Before forming their band in Los Angeles and relocating to Nashville, the Hawthorns both enjoyed acclaimed careers of their own, leaving their separate marks on the worlds of rock, country, and pop music. California native K.P. (formerly Kirsten Proffit) launched her solo career with 2006’s Lucky Girl. She was also touring the country with Jaime Wyatt and Manda Mosher as a member of CALICO, a trio of songwriters whose music paid tribute to California’s country-rock golden days.

A songwriter, multi-instrumentalist, lead guitarist, and record producer, Johnny Hawthorn had already performed with bands like Toad the Wet Sprocket and Everclear when he crossed paths with K.P. at the Cinema Bar in Culver City, CA. He’d also released three albums as a solo artist, with Guitar Player Magazine likening his phrasing to Jimi Hendrix and his vocal melodies to The Eagles.