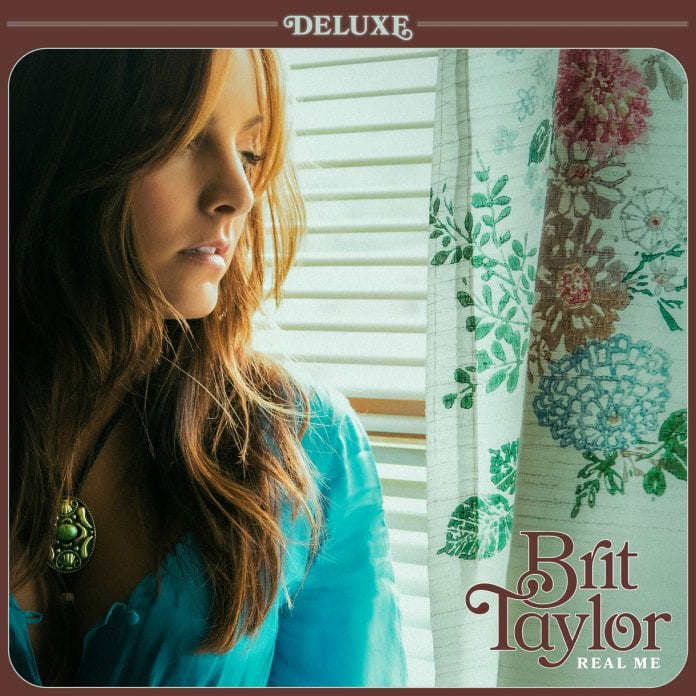 Nashville, TN (June 24, 2021) With a strum of her guitar and three songs for the ages, rising country star and crafted storyteller Brit Taylor once again invites listeners into her life and her heart with the July 9 release of her expanded album, Real Me Deluxe.  Following last year’s successful release of her debut album Real Me (“…a beautiful mix of classic country but vintage singer/songwriter and some bluegrass thrown in” – NPR World Café; “… a stunner which lyrically showcases Taylor’s brutally honest feelings” – American Songwriter; “… traditional country and reflective songwriting…Real Me is hard to beat” – CMT), Taylor follows with her Deluxe album featuring two classic covers and an original song destined to be classic.  Both Real Me and Real Me Deluxe were produced by Grammy award-winner Dave Brainard.
Listen here.

“At Least There’s No Babies,” is her original song on Real Me Deluxe.  Penned by Taylor and country artist Dee White, who also sings along with Taylor, it was released in June to critical acclaim. Rolling Stone said “…White harmonizes beautifully with Taylor in the mournful tune” and The Musical Divide called it “absolutely excellent stuff” that “might be the best song in either of their catalogues” and “the best song I’ve covered.”  Driven by the beat of the upright bass wrapped in a bow of verbed-out guitars, the brutally honest part-sarcasm, part-sincerity divorce song is destined to become a classic.  It evokes the sounds and moods of George Jones and Tammy Wynette in a modern, yet traditional lyrical dark comedy. The song is featured on numerous playlists including Apple’s New In Country, Spotify’s Fresh Folk and Indigo, and Amazon’s Fresh Folk and Americana.

Taylor’s cover of “I Go To Pieces” paints a modern shade of blue on a song from the golden era.  The inventive remake – delivered in Taylor’s lusciously smooth alto – takes the song from its 1960 Mersey beat to 21st Century cosmic heartache. One of her all-time favorites – she remembers her grandmother humming along while it played on the radio, it emphasizes to her that quality songwriting and music span the ages, bringing generations together.

Her equally distinct cover of “Ain’t That Lonely Yet” blends a little Roy Orbison with a big dose of Dwight Yoakum, resulting in an achingly melancholy re-creation of the song.  She trades a ’90s drumbeat for a smooth ’60s groove – and a few Glen Campbell strings – to yank the classic firmly into the 21st Century.  On a personal note, singing the hit of her fellow eastern Kentuckian hero was a dream come true.

“I’ve been told that I am an old soul in a young person’s body, and it might be true,” Taylor said.  “I didn’t pick the cover songs for my album, they picked me long ago. I wanted people to experience the two very different musical worlds that influence the music I make today.”

Ain’t That Lonely Yet

I  Go To Pieces

At Least There’s No Babies

Real Me Deluxe, like its parent album, introduces Brit Taylor perfectly, both musically and personally.  Not afraid to be influenced by the past she loves and adapt it to the future she is, the album – with its influences that include Bobby Gentry vibes, Loretta Lynn honky-tonk, Waylon and Willie waltzes, Tammy and George duets, western swing and heart-tugging vocals – tells musical stories that manage to be dramatic, humorous, heartfelt and down-right honest. Each song has a purpose and each song tells her personal story.  And each song manages to get stuck in your head even before you finish the first listen.

Real Me was born of hard times.  It is Taylor’s reflective musical journey through self-discovery and finding her “real me”. Her idyllic life had imploded and her realized dreams – marriage, band, publishing deal, even her dog died – had become real-life disappointments.  She had to see what was wrong with her life before she could figure out what would be right. As liberating as Real Me was, she knew her saga wasn’t truly complete.  There was one more story to be shared – one that would become the final chapter of that phase of her life.

Taylor is truly authentic, something she knows you can never fake.  Real Me Deluxe is Taylor’s real story and real emotions.  And, in some way, it becomes everyone’s story. “At Least There’s No Babies” and Real Me Deluxe complete the story.