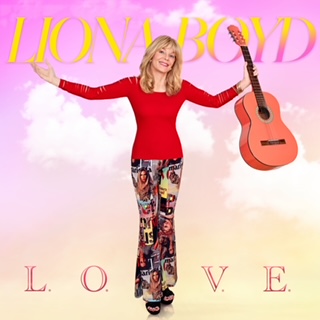 With a storied, 45-year-plus career filled with success and accolades to reflect on, Canada’s “First Lady of the Guitar” Liona Boyd has certainly earned that title and the international love she and her music have shown. There’s no resting on laurels going on here, just a lot of gratitude, love and new music to share with the world. Liona Boyd’s 29th album, L.O.V.E. has arrived, along with the new single “Gracias” – available now!

When our global pandemic slowed the world down to an isolated crawl, the multi-honoured guitarist, composer, vocalist, and author was all about the forward momentum of creating new music.

“I was writing and recording extensively over the last three to four years,” the five-time JUNO winner recently told Canadian Musician.

The results of which are a mostly instrumental album called Once Upon a Time targeted for release next year and Boyd’s brand new album L.O.V.E. containing seven, exuberant, Latin dance-influenced tracks.

“The L.O.V.E. album songs are really about maintaining a sense of joy during this trying time,” explains Boyd, who once again partnered with longtime producer Peter Bond to record the album at Toronto’s Rose Room.

Certainly, the inherent joy, romance and irresistible grooves of Latin music go a long way to that end. It’s a genre that Boyd has long felt an affinity for. “Since living in Mexico as a teenager, and performing in South and Central America, I’ve always felt a strong attraction to the catchy, sensual rhythms of Latin music,” Boyd shares.

The past 12 months have really showcased Boyd’s Latin music influences and leanings as three singles and videos have advanced the release of the new L.O.V.E. album. The lead single, “Popcorn Remix”, a re-imagined and very dance-worthy version of the classic instrumental, arrived with a colourful and playful video filmed in both Toronto and Palm Beach, Florida peppered with visual call-backs to Boyd’s past. Following that, Boyd released the L.O.V.E.’s title track, with guest Latin vocalist, friend and fellow Torontonian Amanda Martinez, the video now has over 65,000 views on YouTube. The third single “Ayudame Papa”, which translates as ‘Help me, father’, is dedicated to the multi-platinum and gold selling artist’s late father John H. Boyd and features some of his original sculptures.

The latest single release “Gracias” is a smooth, smile-inducing Latin thank you letter graced by Boyd’s bright, signature guitar work and sweet, clear vocals repeating “Thank you. Thank you. Gracias.” No matter the language, the gratitude Boyd shares for a lifetime of living and creating the music she loves is palpable in this captivating track. The new music video for Gracias is available now on YouTube.

Recipient of both Officer of the Order of Canada and Order of Ontario, Liona Boyd is the winner of five JUNO Awards, five Guitar Player Magazine’s Classical Guitar Musician of the Year awards, Vanier Award, Women Who Make a Difference award, Prix ‘Esprit du Ciècle, and Artist of the Year and Honorary Mayor of San Antonio, Texas — plus four Honorary Doctorate of Law degrees and an Honorary Doctorate of Music degree. She has received a Lifetime Achievement Award from the US National GUITAR Museum, joining the accolade’s ranks among fellow peers B.B. King, Glen Campbell, and Bonnie Raitt, as well as a Lifetime Achievement Award from the JoAnn Falletta International Guitar Competition, and inducted into Guitar Player Magazine’s Gallery of Greats.

Since the beginning of her career in 1974, Boyd has released 28 albums. She has upwards of 16 million streams across platforms, and her live concert holiday special, A Winter Fantasy, continues to be televised nationally via PBS and CBC.

Liona Boyd has appeared in countless venues around the world, and collaborated with the likes of Sir Andrew Davis, Yo Yo Ma, Eric Clapton, David Gilmour, Gordon Lightfoot, Tracy Chapman, Ronnie Hawkins, and Olivia Newton-John, to name a few. The author of two autobiographies, No Remedy for Love and In My Own Key, as well as a soon to be published rhyming children’s book, Boyd is also a dedicated philanthropist and activist for a lengthy selection of charities close to her heart.