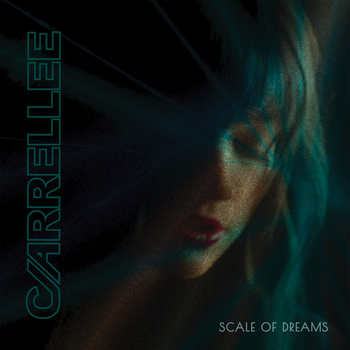 October 6, 2022 –  New York, NY:  Carrellee (née Sarah Pray) will release her debut album Scale of Dreams under that moniker on November 18th (Negative Gain Productions.) Carrellee overlays delicately sensual vocals about divorce and desire over a wall of scorched synths and processed tapes. She had some help crafting her noir synth-pop sound from producer Brett Bullion (Low, Poliça.) During the pandemic, Carrellee turned to the microKORG and Yamaha DX7 synths after finding the folk music she had been doing to fall a bit flat in expressing the personal intensity of the year including going through a divorce with her personal and musical partner.

Carrellee is the newest signing to Negative Gain Productions, a Chicago-based label with recent releases from Curse Mackey (Pigface and Thrill Kill Kult), Josie Pace and, Information Society and are very excited to have her join the roster:  “Carrellee comes from an American Singer/ Songwriter background, and brings something new to our stable of artists. Her music is crafted from folk music, but twisted with electronics, and delivered with a bittersweet arrangement of emotions. We knew from the first time hearing her song Morning Sun that she was special. Carrellee is pure talent, and elevates our artist roster. – Micah Skaritka – Negative Gain Records.

While writing new songs for this record, Carrellee started posting weekly demo videos, titled ‘The Official Unofficial Synth Series’ on social media amassing nearly one million streams on Facebook in 2021. ‘Scale Of Dreams’ conjures crushed artifacts of desire, with each instrument processed through crumpled and fried analog tape drawing inspiration from 80’s new wave icons Cocteau Twins and Kate Bush, as well as a wide variety of Italo disco and synthwave artists.  The forthcoming first single ‘Morning Sun’ came to Carrellee in a dream during her divorce. In the morning she quickly transcribed it from her home studio, and shared the demo video on Facebook where it has received 379K views.