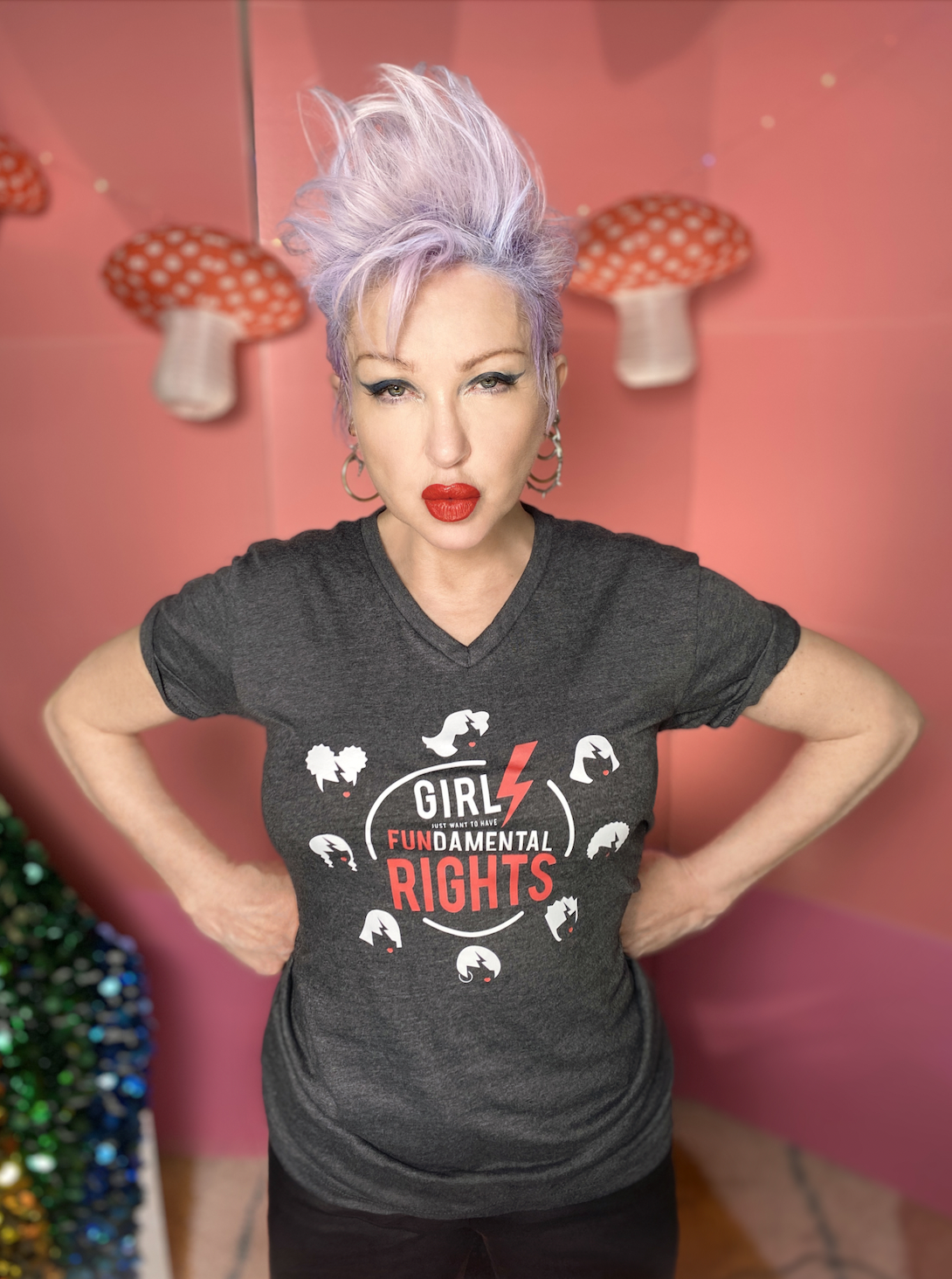 October 11, 2022 – Cyndi Lauper has announced her ‘Girls Just Want To Have Fundamental Rights’ Fund, which was formed to financially support women’s issues in an inclusive way. The fund is a donor-advised fund housed at the Tides Foundation. Through the partnership, the first year’s grants will primarily be given to organizations that are ensuring access to abortion and reproductive health services.

Lauper is launching the fund in response to the overturning of Roe v. Wade and represents the next step as a long-standing advocate for abortion rights, women, and the LGBTQ+ community. Today’s announcement also coincides with The International Day of the Girl.

The recent marches for reproductive freedom have inspired Lauper to re-release a limited edition “Girls Just Want To Have Fundamental Rights” t-shirt, with net proceeds going to the fund. Cyndi designed the t-shirt with the support of her friend Lisa Glines and it will be available through Bonfire here. Lauper first released a version of this t-shirt in 2017 when the message of “Girls Just Want To Have Fundamental Rights” was used widely on signs at the Women’s March, which raised over $250,000 for Planned Parenthood and True Colors United.

Says Lauper about the fund, “I never thought I would see the day that a fundamental civil right for half of the population would be taken away in this country. We must push back, which is why I am launching the Girls Just Want to Have Fundamental Rights Fund at the Tides Foundation. It is more important than ever that organizations advancing women’s rights and outreach programs ensuring access to safe and legal abortion, reproductive health, and prenatal care have the financial resources they need to do their life-saving work. We will do all we can to support them, starting with funds raised from the new Girls Just Want to Have Fundamental Rights t-shirt I am releasing today. I believe in the United States and I believe that we will not only regain the right to choose, but one day actually secure full equality.”

Lauper also re-released her abortion rights single “Sally’s Pigeons” in June. She went into the studio just after the Supreme Court draft opinion on Roe v. Wade was leaked in May to make the new acoustic version. First released in 1993, Lauper wrote “Sally’s Pigeons” with Mary Chapin Carpenter to share the common experience of the countless women who died as a result of back-alley abortions. The women’s deaths were constantly in the newspapers Cyndi read growing up before Roe v. Wade was decided 50 years ago. Today she has released a new lyric video for the acoustic version of the song: https://youtu.be/mPKNF39igPs

A tireless advocate, Lauper has been fighting for the underdog – especially women, people living with HIV/AIDS, and the LGBTQ+ community for decades. She has worked with countless organizations focused on these issues, like the Human Rights Campaign and Planned Parenthood, during that time. Cyndi co-founded True Colors United in 2008 to bring an end to homelessness amongst LGBTQ+ youth, who make up to 40 percent of the 4.2 million youth who experience homelessness each year in the U.S. Over the past 14 years, the nonprofit organization has had an indelible impact on ending youth homelessness in America.

In support of the new fund, Lauper will be planning multiple fundraising opportunities throughout the year. If you would like to donate, please go here: www.cyndilauper.com/fund