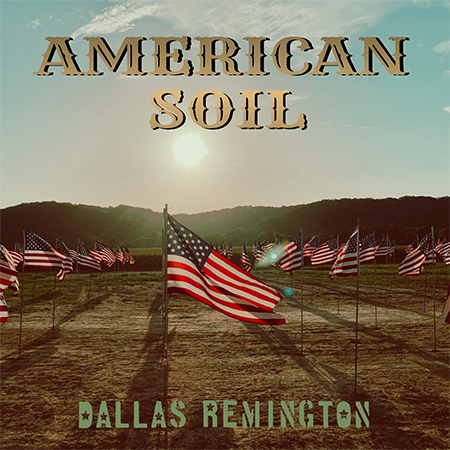 NASHVILLE, TENN. – (September 17, 2021) – As Americans continue to struggle in the day-to-day issues of our current issues personally and as a nation, Dallas Remington, has released “American Soil,” a heartfelt patriotic tune in honor of and in tribute to the U.S.A. The song was performed live at Freedom Jam in Eureka, MO on August 28 and released digitally today. Penned by Dallas Remington and Courtney Bumbacher with production, engineering and mixing by Corey Lawson at Claw Sound Studios and Mastered by Harold Larue Mastering in Nashville. “American Soil” is available on all digital streaming and download here.

When Dallas Remington and Courtney Bumbacher got together to write on July 9th, 2021, it was on their hearts to write a patriotic song. The pair of female songwriters wanted to write a song expressing how thankful they are to the men and women who have dedicated their lives to serve and protect the United States of America. Before the day was over, “American Soil” had been created.

The world seemed to change drastically when less than two months later, thirteen of our young servicemen and women paid the ultimate sacrifice while assisting the citizens of Afghanistan. “It’s safe for me to walk out my own door” has always been Dallas’s favorite line of the song. It broke her heart when these events occurred and when the change of rule in Afghanistan meant it was no longer safe for women to walk outside their home. She says she will never take for granted the freedom and safety she has living here in America.

While preparing to perform for a Veterans’ event in St Louis, MO, Dallas began including “American Soil” in her sets. Dallas says she knows in her heart this is a song our country needs to hear. Despite the differences we have here in America, to live and be raised on American Soil is truly a blessing.

“There’s people over there in some foreign land
Praying and doing everything they can
Working 24/7 until they can come home again
But over here it’s a struggle just to make amends
The fighting and dividing is between friends
Can’t even raise your voice to try to defend
Wherever you stand
There’s no other flag I’d pledge allegiance to
Then that ole red white and blue
‘Cause some sacrificed, some even lost it all
Because Freedom ain’t free, we can have it all
It’s safe for me to walk out my own door
So I’ll always be loyal
To that American soil
Sometimes I just don’t understand
how people can forget and  not give a damn
About the price that was paid for them  to wake up  to another day
Ain’t it such a shame …”

“Dallas is such a pleasure working with in the studio! She brought me a great song that I thought needed to be heard, so I made it happen! The well-crafted writing on “American Soil” made it easy to bring this song to life,” commented Producer – Corey Lawson.