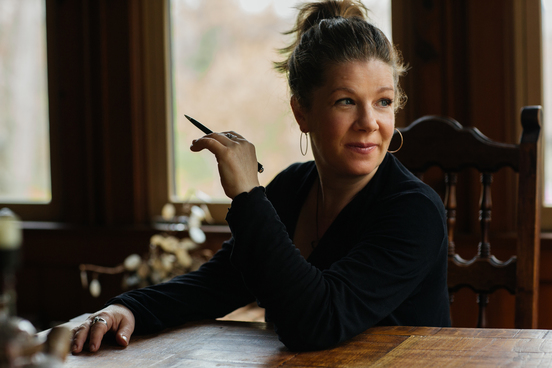 COLD SPRING, N.Y. — When Dar Williams starts discussing her latest album, I’ll Meet You Here, she’s not yet sure she can identify its through line; a thread that might connect its 10 songs together. But as she delves into the collection, releasing October 1 2021 on BMG‘s recently launched Renew label, she mentions her attempt to turn her yard into a meadow. Unfortunately, the wildflower seeds she scattered on the grass around her home, in New York’s Hudson Valley, didn’t take. Now she just has an unruly lawn.

“It kind of has a crazy-lady look,” Williams says, laughing. “I’m on a corner in a village, so everybody sees it. I do all this remedial stuff; it’s not really working. But I know why I did it, and I know what I was going for. Generally, people are saying ‘I see what you’re trying to do.’ And I’m sure some people are shaking their heads. And I’m OK either way.”

“At some point,” she adds, “you have to meet life where it meets you … I think what the songs all have in common is the willingness to meet life as it arrives.”

We might even simplify it as “acceptance,” that concept Buddhists and behavioral therapists try so hard to teach. But that’s far from passivity; on the contrary (and unlike her lawn), Williams’ lyrics contain bouquets of optimism, delivered on melodies alternating between beguiling lightness and understated gravity.

In “Today and Every Day,” for example, she sings, There’s no time for this smug frustration, I say everyone, EVERYONE’S a power station. And we’ll light the way, but we got to say we can save the world a little every day.
But she also writes from the viewpoint of a woman who has weathered plenty of storms (as vividly described in “Let the Wind Blow”), and is no longer willing to delude herself into believing someone else’s definition of love (as noted in “I Never Knew”).
Comparing “Magical Thinking,” one of several relationship songs, with “Time Be My Friend,” from which the album takes its title, Williams remarks, “There’s a piece of your brain that you have to calm in order to meet time, and to not sit there saying, ‘If I keep onfollowing these rituals, maybe I’ll influence what’s going to happen.’ It’s like, ‘Why not just be OK with what’s happening now?’

“I’ve been very interested in how to control my future,” she adds, “and this album has to do with the fact that at some point, you just can’t.”
Like everyone else, Williams spent 2020 in that state of non-control. She and longtime producer Stewart Lerman tracked most of the album, her 12th studio recording, in November of 2019. In late February of 2020, she cut the title tune in Woodstock with bassist Gail Ann Dorsey and Larry Campbell, who produced the track and played guitars, pedal steel and twangy baritone guitar. When told they had to postpone a mid-March mixing date, Campbell said he wasn’t feeling well anyway. Turns out he’d contracted a serious case of COVID-19. By the time he recovered, they knew a 2020 release was not in the cards — tarot or otherwise.

Williams instead worked on her latest book, Writing a Song That Matters, titled after the songwriting retreats she began conducting in 2013. Williams published two young-adult novels with Scholastic in the mid-2000s, along with a green blog for Huffpost, before she tackled her urban-planning study, published in 2017: What I Found in a Thousand Towns: A Traveling Musician’s Guide to Rebuilding America’s Communities — One Coffee Shop, Dog Run & Open-Mike Night at a Time.

Insights from that book inspired “Little Town,” the album’s gorgeous, deeply nuanced centerpiece. It packs the emotional punch of Brandi Carlile’s”The Joke,” but as a quiet confession, not bold defiance.
With only her acoustic guitar accompanying the soft rise and fall of her voice, Williams inhabits the perspective of a bigoted local unwilling to welcome newcomers, cautioning,

It’s nothing that you did, it’s not the color of your skin,
But one thing you should know, you’ve gotta take it slow.
As Bryn Roberts‘ piano and Dave Eggar‘s cello kick in, her Archie Bunker even questions why the mayor, a lifelong friend with whom he plans each July Fourth celebration, would invite one of those new arrivals — you, especially you — to join that effort.
And as the fireworks came up above the mountain,
I saw you put your hand up to your heart,
And I saw the mayor watching, knew my kids were watching
Hoped that I would come around. Big parade, little town.
Eventually, he embraces his town’s new diversity. But that happy outcome is imbued with so much melancholy and regret, it almost evokes tears.
Williams says the song reflects two mayors who understood how change was necessary to move their towns forward.
“These mayors, who looked at new immigrant populations as a gift and went the extra mile to translate that to their old buddies, were very moving to me,” she explains. “The fact that the mayors said, ‘You can wrap your mind around this; this is exactly what we’re all about,’ was not only something interesting, it’s something I’ve seen.”
Williams strongly believes that all of us possess our own power and ability to achieve, and she rejects the exceptionalism that encourages us to “admire that yonder star,” while making us feel small and insignificant; unworthy of shining on our own but hoping to catch enough distant light to inspire some tiny accomplishment.
“I just can’t stand that,” she says. “We don’t have to stare at a star. We can find it in ourselves.”
Indeed, we can take charge of our own actions — and they matter. “Every time I figure out how to, you know, get bulk flour without using a new container, I see a little picture of a slow-mo butterfly wing, like I helped one millisecond of butterfly wing-flapping happen that wouldn’t have,” she says, alluding to the chaos theory concept known as the butterfly effect.
Williams’ literary, cerebral writing style, while quite accessible, includes several esoteric references ripe for exploration. For instance, a single line in “Berkeley” — Bought from the bookstore where “Howl” was on trial — invokes the Allen Ginsberg poem regarded as a cornerstone of the Beat movement; City Lights, the famed San Francisco bookstore; City Lights owner Lawrence Ferlinghetti, who published the poem; and the obscenity trial he endured because of it.

One song isn’t her own, but she loves the melody and message of “Sullivan Lane,” a retro-poppy tune about finding kindred vulnerable spirits, by Joziah Longo of folk-rock band Slambovian Circus of Dreams (coincidentally, her neighbors).

As for the album closer, “You’re Aging Well,” that one carries special significance. It appeared on Williams’ first album, then Joan Baez recorded it with her and invited her to tour Europe and the States. By anointing Williams as a folk artist worthy of attention, Baez launched her career.

“I’m the same age now that she was when she took me on the road,” Williams marvels. On this version, she meshes her elegant soprano with Roberts’ beautiful piano playing, contrasting her delicate singing with her forceful push against conventional expectations for women. When she finally rejects them and finds her own voice, she revels in its power.

Which brings us back to that through line.

“Good and bad things happen, and it’s not necessarily a reward or indictment. I’ve just got to meet it.” Williams observes. “Like, I’m bringing my whole life to this moment; it will surprise me, challenge me, show me where I was wrong, even make a fool out of me, but my job is to show up and not take adversity personally. Real happiness doesn’t have to feel like Snoopy dancing with Woodstock; it can just be knowing you have the resilience to meet whatever comes to you. I will call that a good life.”