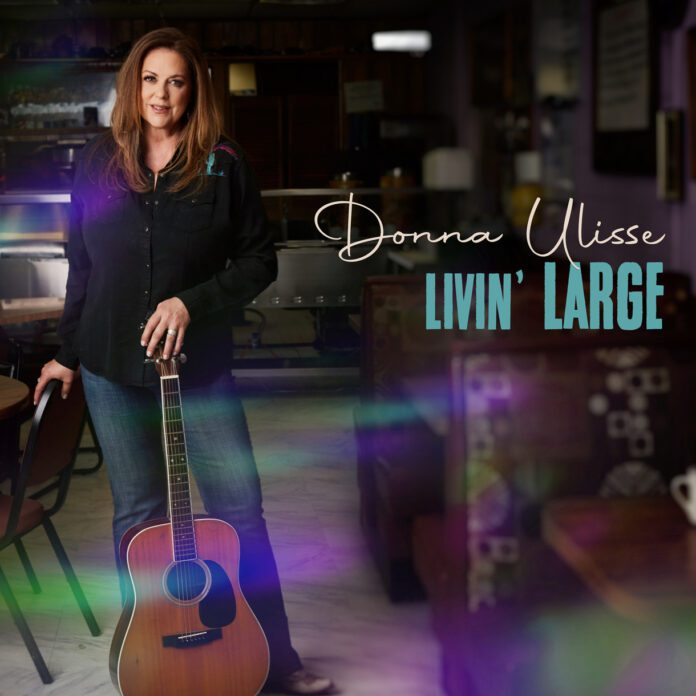 NASHVILLE, Tenn. (February 25, 2022) – Highly-acclaimed bluegrass artist and songstress Donna Ulisse released her thirteenth studio album, Livin’ Large, today, February 25th. Produced by the incomparable Doyle Lawson and released on the boutique bluegrass label Billy Blue Records, the full-length album features eleven tracks, eight of which were co-written by Ulisse. CMT has dubbed Ulisse, “one of the most commanding voices in bluegrass music.”
Doyle Lawson shared, “Wrapping up my third recording for Donna, it occurred to me just how much she tells stories in such a way where one can close their eyes and watch them unfold. There are song rhymers and there are storytellers using rhyme and rhythm. Donna belongs in the ‘storyteller with rhyme and rhythm’ group. It is a pure pleasure working with Donna and the Poor Mountain Boys!”
Donna added, “Three’s a charm for me and one of my all-time musical heroes, Doyle Lawson!  I am grinning from ear to ear thinking about having Mr. Lawson at the helm caring for my songs as if they were his own.  Living’ Large is the result of our team effort, and we had a blast making it.”
With her past albums and singles achieving tremendous success on Bluegrass Unlimited, Folk DJ, Americana, and Billboard Bluegrass Album charts, Ulisse’s highly-anticipated follow-up to her Billy Blue debut album, Time for Love, is already building on her streak of hits. The lead single, “Livin’ Large In A Little Town,” charted on Bluegrass Unlimited and is accompanied by a music video that can be viewed here. The full album Livin’ Large is out everywhere now, click here to listen.
Track Listing:
1. Gray Rock, Red Clay Land (3:09)
2. Hard To Find The Good Here Anymore (3:32)
3. The End of Crazy (3:20)
4. Turn My Heart (3:40)
5. Maggie Valley Home (3:10)
6. Always Tomorrow (2:49)
7. Daffodil (3:17)
8. Livin’ Large In A Little Town (3:06)
9. Harp With Golden Strings (2:54)
10. Don’t Bury This