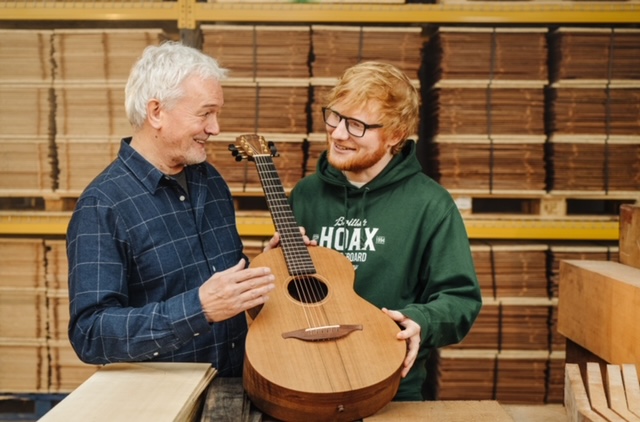 Two years after launching the Sheeran by Lowden brand of guitars with George Lowden and following his surprise track drop in December with ‘Afterglow,’ Ed Sheeran has joined up with renowned guitar maker George Lowden to give away two guitars signed and used for recording by Ed in a rare recorded appearance via online call, which was shared to a global audience on the Sheeran by Lowden YouTube channel on Friday.

Marking the announcement of upgrades to the Sheeran by Lowden range of guitars which includes the addition of Indian rosewood on 4 models in the range and highlighting two years since the collaborative brand was launched by Ed and George, Ed signed two Sheeran by Lowden guitars live on camera which will be given away at random via the comments on the YouTube video.

A long-time fan of the Lowden brand, Ed Sheeran has chosen to play guitars hand made by George Lowden on stages around the world, in the studio, and most recently in the videos for his new track, ‘Afterglow.’ Commenting on his support and admiration for Lowden guitars on the call Ed said, “I’ve actually got a Lowden guitar in every single room of the house…they’re scattered around, because it’s just nice to walk into a room and have a beautiful instrument there that you can pick up and play.”

Two years ago, the friendship between Ed Sheeran and George Lowden produced the Sheeran by Lowden brand of guitars which they joined forces to launch at a surprise event in Los Angeles. Developed to encourage aspiring musicians and help those with an interest in guitars gain access to high-quality instruments, Ed and George collaborated to create a brand of guitars which would pair the world-class craftsmanship that goes into each Lowden guitar with the Sheeran name. The partnership was enthusiastically received by Lowden brand faithful and up-and-coming guitarists alike.

Reflecting on their partnership, Sheeran said: “It was important for the 13 year old in me being able to get the quality of a Lowden guitar but also it not be an unachievable feat.”  Sheeran added, “I personally think it’s better than anything else in its price bracket.”

Highlighting that quality guitars at this price point are not typically made in this part of the world, George Lowden added, “For me to try to set up a new workshop to make the guitars here [in Northern Ireland] was a big challenge. But we’re two years down the line now and everything is going very well.”

“We’ve got a really good team now,” said George, “who have been trained from scratch, and have developed high-tech ways of making the Sheeran by Lowden. It’s a whole different ball game.” Commenting on the unique build process, George added, “The guitars still feature hand touches, though. We still carve the internal struts with Japanese chisels, for example, so there’s a kind of mix of high tech and traditional skills.”

To celebrate two years since Sheeran by Lowden’s launch, Ed and George also highlighted upgrades to the line-up with the introduction of a premium tonewood, Indian rosewood, to the Sheeran by Lowden offering. New for 2021, the range now offers Indian rosewood back and sides for enhanced tone on the small-bodied S02 (paired with Sitka Spruce top) and S03 (paired with cedar top) and the W02 (paired with Sitka Spruce top) and W03 (paired with cedar top) compact guitars which are based on Lowden’s iconic ‘Wee Lowden,’ that was designed especially for Ed by George.

Commenting on the upgrade George added, “These are the first Sheeran by Lowden guitars with Indian rosewood on the back and sides and we’re also using a natural oil finish on the back, sides, and neck. You also get a warmer sound from the Indian rosewood.”

“That’s the thing I really like about Sheeran by Lowden,” added Ed Sheeran. “Most guitars at this price point are not always wood on the sides or back. This is actual, real, wood with real finish. I’m just so grateful to be able to work collaboratively with George on these and make them exactly what they need to be.”

Fans of Ed Sheeran and the Sheeran by Lowden brand can enter the competition to win one of two Sheeran by Lowden guitars signed and used for recording by Ed. To be in with a chance of winning one of these one-of-a-kind instruments, visit youtube.com/sheeranguitars before 5 pm UTC on Friday 12th February and comment on the video to share what song you would play if you were lucky enough to win the prize. Two winners will be selected at random and announced via Sheeran by Lowden’s Instagram and online at www.sheeranguitars.com. Terms & Conditions Apply.