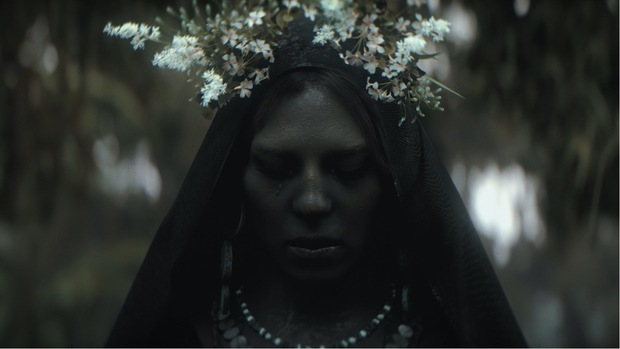 “Reliques’ is a song inspired by the vertigo we feel in front of the ocean, in front of its immensity and its strength,” Yndi explains.

The track is from Yndi’s much lauded debut album, Noir Brésil, which is out now. Listen to PRI The World’s feature HERE and read Vogue Portugal piece HERE. PAPER Magazine raves of the album, “Yndi’s syrupy smooth vocals glide effortlessly,” while Office Magazine says “the smooth tones in her voice interact with the distinctly Brazilian percussion in a really beautiful way. The music envelopes you.” Cosmopolitan France praises, “an enveloping and almost angelic voice…Yndi Da Silva, 27 y-o, French-Brazilian trans singer, is fascinating. Hybrid and timeless, her debut album Noir Brésil is a success,” while ELLE France says “Yndi captivates.”

Formerly known as Dream Koala, Yndi decided to retire the moniker and began writing what ultimately became Noir Brésil—a modern pop album where afro-Brazilian percussion meets French and Portuguese poetry to create an immersive soundscape. As Dream Koala, she received praise from the likes of NPR Music (“feels like an uninhibited foray into a new musical dimension, a less dissonant, sweeter take on FKA Twigs’ experiments”) and Vogue (“akin to having strange words whispered into your ear as you experience an epic 3D soundscape.”) She released the EPs Odyssey (2013), Earth. Home. Destroyed. (2014) and Exodus (2015), as well as popular single “We Can’t Be Friends,” gaining her international success and garnering millions of streams across platforms.