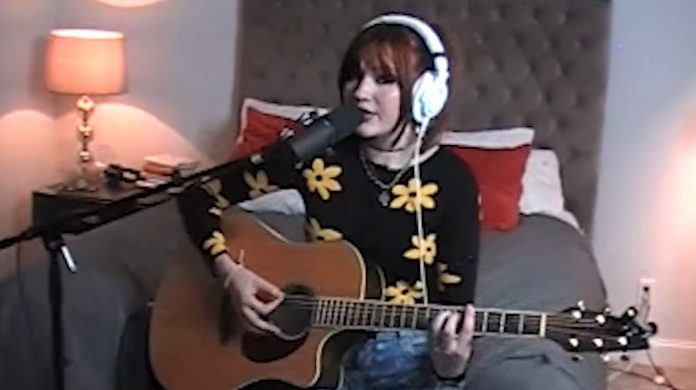 17-year-old rising pop singer-songwriter GAYLE has debuted a stripped back version of her Atlantic Records debut single “abcdefu.” The original version has quickly amassed over 17M global streams. The emotional acoustic version of “abcdefu” is streaming now via YouTube HERE, which has been praised by Blackbook for its “earnest intensity.”   “This video is to honor the girl who played in her bedroom for a year-and-a-half,” says GAYLE.

GAYLE celebrated the success of her fiery single “abcdefu” with three other alternate versions. “abcdefu (demo),” “abcdefu (chill),” and “abcdefu (angrier)” are streaming now via DSPs and streaming services. Each version showcases a different side of the versatile song.  The original version of “abcdefu” has amassed over 17M global streams and is available now at all DSPs and streaming services HERE; an official music video is streaming now via YouTube HERE. GAYLE has already garnered some of pop’s most influential playlists and the song continues to grow in streams every single week since its launch just over a month ago. Produced by Pete Nappi (Kesha, Anne Marie, Madison Beer, Illenium), “abcdefu” arrives as a glowing example of GAYLE’s gift for fusing raw sincerity with an idiosyncratic and sometimes irreverent perspective. With its minimalist backdrop of jagged guitar work, the tongue-in-cheek breakup song explodes into a glorious free-for-all at its gang-vocal-fueled chorus. But “abcdefu” also telegraphs the Nashville-based artist’s refusal to compromise her own needs.

Along with the new versions of “abcdefu,” GAYLE has announced that she will serve as support on the upcoming Winnetka Bowling League tour. Tickets are on sale now- see the full list of dates below, and visit https://www.wbleague.com/ for more info.

Fearlessly honest and undeniably magnetic, GAYLE has already earned more than 10M worldwide streams by creating self-possessed modern pop music that’s empowering for both artist and audience. Growing up outside Dallas, she first started singing at the age of seven and before long had taken up piano and guitar as well writing songs on her own. By the time she was 14, she’d crossed paths with GRAMMY® Award-nominated songwriter, former American Idol judge, producer, and music publisher Kara DioGuardi, who promptly took on the role of mentor.  Now hard at work on her Atlantic Records debut project, GAYLE is intent on making music that offers her listeners certain emotional freedom.