GONE WEST, 2x Grammy-winner and multi-platinum recording artist Colbie Caillat, multiplatinum songwriter, Grammy-winning songwriter Jason Reeves, Hawaiian recording artist Justin Kawika Young (11 #1s in Hawaii), and Academy of Country Music and CMT Award nominee Nelly Joy, today released the video for “I’m Never Getting Over You”, just a month after disbanding the group they forged out of their musical friendship three years ago. The video premiered earlier this week on SiriusXM’s The Highway, thanks to program director JR Schumann, a longtime supporter of the project.

“This is one of our favorites tracks from Canyons,” said the band. “The music we made together has meant so much to us, we wanted our fans to share this memory of what we accomplished with our music and with their support. It is our farewell video.” 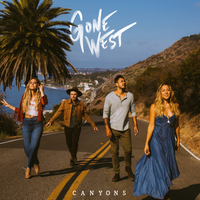 Filmed in an almost sculptural black and white by Director Patrick Tracy, the setting features Caillat and Young (who announced the end of their engagement earlier this year) stage front singing intimately to one another about moving forward after the heartbreak of a broken relationship while Reeves and Joy play piano and guitar behind them.

“I’m Never Getting Over You” was originally written by Reeves, Caillat, and Liz Rose for Caillat’s Gypsy Heart album, lyrics like “time is a broken heart’s best friend” “I want the end to be easier than the start” take on new meaning in light of Caillat & Young’s breakup and the band’s disbanding in this version, produced by Jamie Kinney and written by Caillat, Reeves, Liz Rose, Young, and Joy. The track, which Associated Press called “achingly heartbreaking”, is from the band’s acclaimed debut album Canyons.

Colbie Caillat’s thoughts on the song:

“I released this song on my album Gypsy Heart in 2014. Each of us in the band always loved this song and felt as if it deserved another shot. But this song was a puzzle to figure out.  We recorded it so many different ways and for some reason, it never felt right. We finally decided to really experiment with it by changing the key, stripping it down, slowing down the verse, re-writing the second verse, and making it a duet with a male vocal on the chorus.  Then we fell in love with it in a whole new way.”