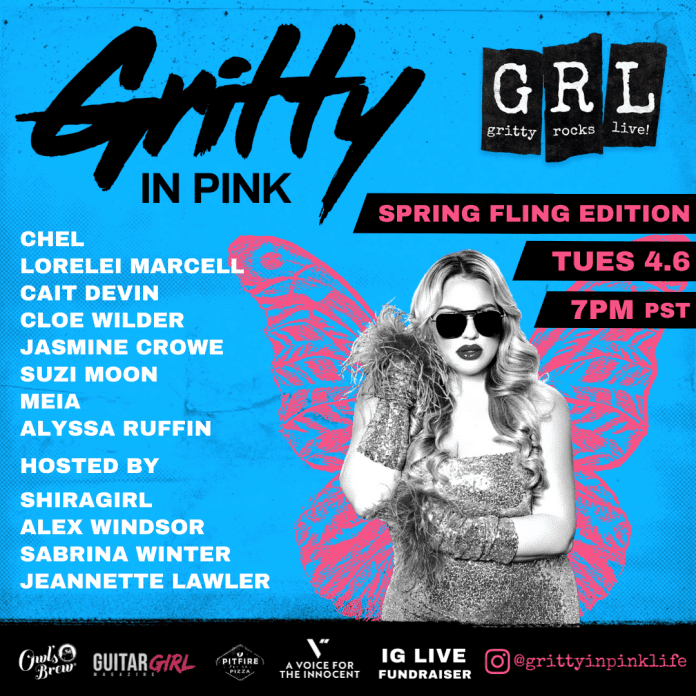 Los Angeles (April 2021): One year after Gritty In Pink hosted its first-ever virtual Livestream during the COVID-19 lockdown, which drew over 600 live viewers and kicked off the Gritty Rocks Live (GRL) Tuesday night series, the community of women in music is celebrating its bright future with its Spring Fling Edition show. The movement, which is on a mission to achieve gender equity in the music industry, will host the GRL Instagram Live Fundraiser for A Voice For The Innocent on Tuesday, April 6 at 7 p.m. PST/10 p.m. EST. The show is sponsored by Owl’s Brew, Guitar Girl Magazine and Pitfire Pizza.

This show’s powerhouse headliner, Chel, is known for her empowerment anthem “Nasty Woman,” which addresses being an independent woman, despite society’s tendency to label strong women. Like Gritty In Pink, Chel fights to promote women’s equality, through her powerful, body-positive message.

More Spring Fling lineup highlights include Suzi Moon, who is the April Gritty
Bandmate of the Month– a new monthly digital magazine feature, highlighting Gritty In Pink musicians. Suzi, who has been a part of the Gritty family since its inception, is releasing her new single “Special Place In Hell” in April and her debut solo record Call the Shots in May, with Pirates Press Records. Her cover and interview will be showcased on the Gritty In Pink Website. Suzi says, “Music definitely chose me. I began writing songs around age 10, and it was empowering… For me, music is just one of the mediums I use to express myself. My songs have characters, fantasies and exaggerated realities that I get to bring to life through music, art, fashion, and film.”

In light of April being Sexual Assault Awareness Month, Gritty In Pink will be live fundraising to support survivors of sexual assault through the non-profit organization A Voice For The Innocent. Alyssa Ruffin will perform her bold new single “Collateral Damage” and shares, “I am excited and terrified at the same time, but it’s alarming how many others have been through a similar, if not the same trauma.”

To witness this celebration of unbridled, raw self-expression, along with the rest of the
inspiring lineup, tune into Gritty In Pink’s IG live fundraiser on Tuesday, April 6!

Gritty in Pink is a new platform empowering women in music through performance, partnerships, and networking opportunities. Founder Shira Yevin has a legendary history of breaking down barriers and carving out a space for women, as the creator of the Vans Warped Tour Shiragirl Stage, which featured 300+ female musicians, including Joan Jett and Paramore. Gritty in Pink continues that legacy of providing community and a stage for female voices in a male-dominated industry, having showcased 170+artists with a collective IG following of over 2.6 Million.

A Voice for the Innocent is a non-profit community dedicated to the support of those
affected by rape and sexual abuse by offering a safe and compassionate space to
share stories and seek help. 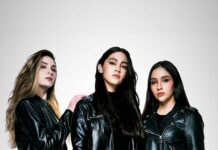 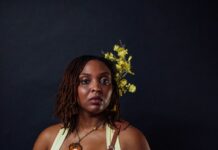