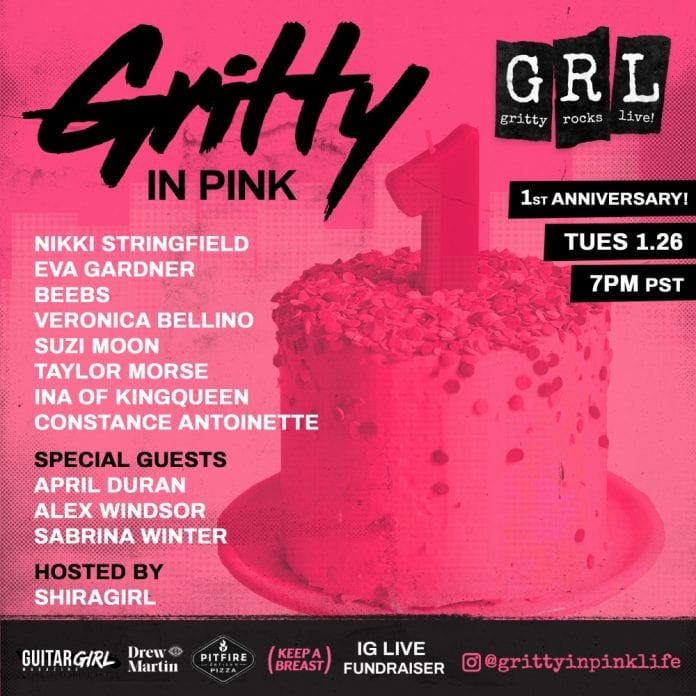 Los Angeles (January 22, 2021): One year after their epic official launch event, Gritty In Pink is kicking off 2021 with an Instagram live fundraiser for Keep A Breast on Tuesday, January 26 at 7 p.m. PST. Gritty In Pink continues its mission of empowering women in music, celebrating a first year of accomplishments, and commencing another year of making history.

The powerful Anniversary Livestream lineup includes both Gritty In Pink alumni, who performed at the first legendary event, and Gritty newcomers. A few notable performers set to illuminate the virtual stage are Suzi Moon of Turbulent Hearts, Eva Gardner, bassist for Pink, Nikki Stringfield of Iron Maidens, and Ina of KingQueen.

Gritty In Pink’s first event in January 2020 was a Grammy-themed jam featuring notable artists including Eva Gardner Britt Lightning (Vixen) and Jess Bowen (3OH!3 drummer). The event filled a void within the male-dominated L.A. music scene and beamed a spotlight on some of Los Angeles’ best female musicians, who do not always get highlighted as individuals, due to their roles performing with major artists.

Suzi Moon of Turbulent Hearts says, “The first Gritty In Pink jam night in January 2020 was like a dream come true. There was finally a night for us to celebrate ourselves. I felt empowered being surrounded by such inspiring company. It’s going to be one hell of a party when we can all get together again, but until then, I have the Gritty app to keep me active in our community. Happy first anniversary Gritty In Pink!”

This show will be the first of many Gritty In Pink virtual concerts in 2021. Gritty will be resuming Gritty Rocks Live (GRL), with upcoming events including a February Galentine’s show and a Women’s History Month celebration in March. GRL was remarkably successful in 2020, raising thousands of dollars for charities, including

Nikki Stringfield of The Iron Maidens and Femme Fatale says, “I am so honoured to be a part of the one year anniversary of Gritty In Pink! Sharing music with others helps bring us all together during these challenging times, and since the proceeds will be going to Keep A Breast it doesn’t get much better than that! I can’t wait!”

Other than through virtual shows, Gritty In Pink aims to unite women in the music industry through its virtual networking platform. Gritty is officially beta-launching its private community: The GRID. The GRID is a way for female musicians to meet each other, attend virtual clinics and collaborate. This site is invite-only, and female artists can get an invite to join the community by taking part in Gritty In Pink’s virtual shows.

“We are so thrilled to celebrate the first anniversary of our first magical, star-studded event at The Satellite in L.A. We knew that night that we had started something special, but we had no idea what turn it would take,” says Gritty In Pink founder, Shira Yevin, “I am so thankful we were able to pivot virtually in 2020 and continue to capture the spirit of our female-driven events through livestreams and our growing our tight-knit community online. I am looking forward to seeing the future of Gritty unfold!” 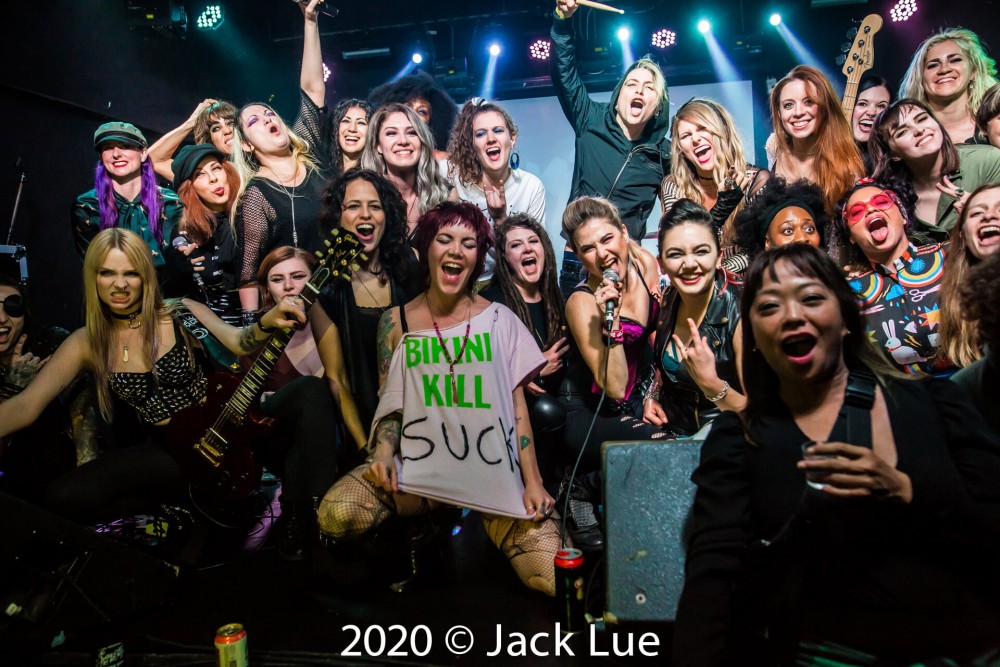 Gritty in Pink is a new platform empowering women in music through performance,  partnerships and networking opportunities. Founder Shira Yevin has a legendary history  of breaking down barriers and carving out a space for women, as the creator of the  Vans Warped Tour Shiragirl Stage, which featured 300+ female musicians, including  Joan Jett and Paramore. Gritty in Pink continues the legacy of providing community and  a stage for female voices in a male-dominated industry, having showcased 160+ artists  with a collective IG following of over 2.5 Million.  Follow @grittyinpinklife and @shira_girl on Instagram, contact [email protected] or visit the website grittyinpink.co for more info.