Home News Music News GRITTY IN PINK GEARS UP FOR THEIR RETURN TO THE LIVE STAGE... 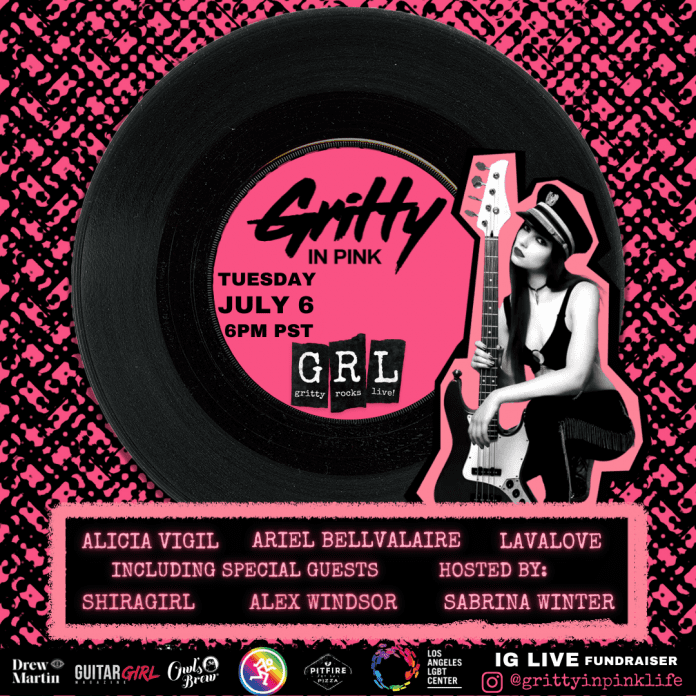 Los Angeles (July 2021): Gritty In Pink partners with NoHo Arts District for a special edition of GRL (Gritty Rocks Live) for an IG Live fundraiser Livestream before their return to the live stage at their July 8th pop-up show at Pitfire Pizza in NoHo, CA. The Livestream will be Tuesday, July  6th at 6 pm PT/ 9 pm ET on Gritty In Pink’s Instagram Live (@grittyinpinklife). The pre-show will follow after Gritty In Pink’s successful Pride show, which had a diverse lineup of female and non-binary artists. The show accumulated over 1500 live viewers and impressions. All proceeds from the Livestream will go to the LA LGBT Center. The pre-show will be generously sponsored by Mackie, along with supporting partners Pitfire Pizza, Guitar Girl Magazine, Local Roots  Kombucha, and charity partner LA LGBT Center.

The pre-show will give viewers a preview of what’s to come from Gritty In Pink’s first post-pandemic live event. After 15 months away from the stage, and the continuous success of their Instagram Live shows, Gritty In Pink is ready to rock out in front of a live audience again!

If you’re in the LA/NoHo area, come check out Gritty In Pink live and in person at their pop-up show at Pitfire Pizza, Thursday, July 8th at 6 pm PT, with live music starting at 7 pm PT/10 pm ET. For the viewers at home, you can tune in to the live show via Gritty In Pink’s Facebook. Be on the lookout for more special summer announcements on Gritty In Pink’s Instagram (@grittyinpinklife).