Home News Music News GRITTY IN PINK ROLL UP FOR 4/20 TO BENEFIT AMERICANS FOR SAFE... 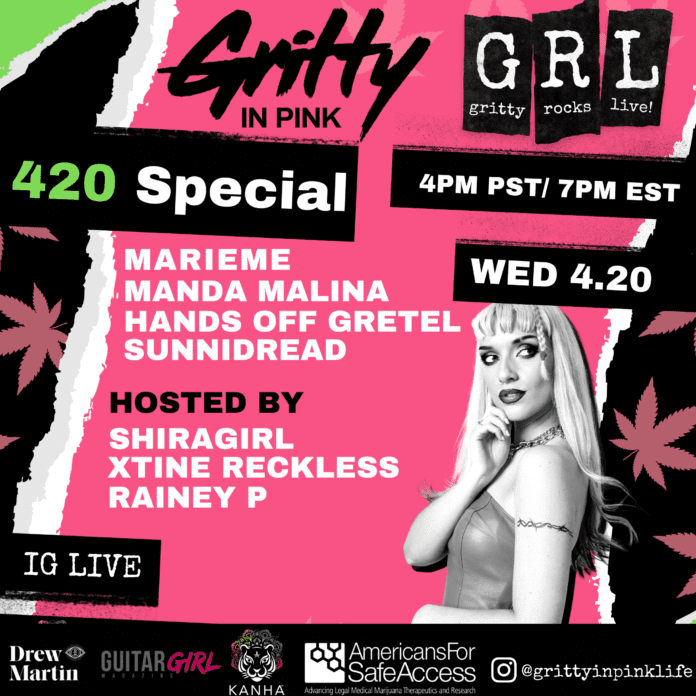 Los Angeles, CA | April 21, 2022 – Gritty In Pink partnered with Americans for Safe
Access on Wednesday, April 20th, for a special 4/20 edition of Gritty Rocks Live via
Gritty In Pink’s Instagram. Americans for Safe Access is a non-profit organization that
is on a mission to ensure safe and legal access to cannabis for therapeutic use and
research. The show was sponsored by Drew Martin, Kanha Treats, and Guitar Girl
Magazine.

The smoking-hot 4/20 special kicked off with hosts Shiragirl, Rainey P (of Shiragirl),
and guest co-host Xtine Reckless opening the show with an amazing performance of
Shiragirl’s “Blazey.” UK-based screaming grunge frontwoman Lauren Tate (of Hands
Off Gretel) was the first guest to join the show with a raspy acoustic performance of
their song “Kiss Me Girl.” She also talks about working on new music, “The guitar
comes to me when I’m sad and I was so I started writing. I’ve written so many songs,
too many songs for this new album.” A vocal-resting Marieme joined the show and
popped a Kanha treat with the hosts to her song “2 Oceans.”

In the second half of the show Swedish pop star Manda Malina spoke about the
inspiration behind her new music and upcoming single “I’ve been writing a lot, especially
during the pandemic. I’ve been inspired a lot by the early 2000’s – I just love early 2000
pop records. So my new project is very much 2000 inspired, so I’ve been focusing on that and my new single is coming on May 6th.” Atlanta-based neo-soul trap empress
SunniDread spoke about her upcoming album “Highly Recommended” which releases
May 7th, and also gave the audience a taste of her new music by playing a track from
the project. Lastly, Debbie Churgai from Americans for Safe Access joined the show
and talked about celebrating the 20th anniversary of the organization, along with their
new campaign to allow individuals to grow their own cannabis. “We started ASA 20
years ago in California, with a mission to ensure safe and legal access to cannabis for
therapeutic use and research. We’ve been working our way across the country now, our
headquarters are in DC, we’re a national org and trying to get in legalized. This year
we’re doing a homegrown campaign, we believe everyone should have the ability to
grow their own cannabis and collective gardening.”